Chronic Wasting Disease (CWD) is a relatively rare transmissible disease that affects the nervous systems of deer, elk and moose. Infected animals develop brain lesions, become emaciated, appear listless and have droopy ears, may salivate excessively and eventually die. There is no evidence that CWD naturally infects domestic livestock. Chronic Wasting Disease has been detected in free-ranging and captive cervids in multiple states and Canadian provinces (view a map). Recently, CWD was also detected in free-ranging reindeer and moose in Scandinavia.

Where is it in Utah?

Chronic Wasting Disease has been found in three different geographic areas within Utah (view a map). The disease was first discovered in Utah in 2002 in a buck taken during the rifle hunt near Vernal. A second positive was discovered in Utah in early 2003, when a mule deer doe that died in an agricultural field near Moab, Utah, also tested positive. Chronic wasting disease was detected in a third in late 2003 when a mule deer doe taken in a depredation situation near Fountain Green tested positive. As of June 16, 2022, 157 mule deer and three elk have tested positive for CWD in Utah.

Chronic wasting disease is caused by small proteinaceous infectious particles called prions. Prion-caused diseases are known as transmissible spongiform encephalopathies (TSE) and include Bovine Spongiform Encephalopathy (BSE or "Mad Cow Disease" in cattle), Scrapie (in sheep and goats) and Creutzfeldt-Jakob Disease (CJD, in humans). Infected animals may shed prions in urine, feces and saliva. Transmission may occur directly through contact with an infected animal or indirectly through environmental contamination. Prions are extremely resistant in the environment and can stay infectious for years. According to the Centers for Disease Control (CDC), the risk of transmission from animals to humans is considered extremely low.

To date, there has never been any direct evidence that CWD can be transmitted from animals to humans. Recently, preliminary results from a laboratory research project funded by the Alberta Prion Research Institute and Alberta Livestock Meat Agency, and led by a Canadian Food Inspection Agency scientist indicated that CWD has been transmitted to cynomolgus macaques through intracranial and oral routes of exposure. Both infected brain and muscle tissues were found to transmit disease to the macaques.

The CDC recommends not consuming meat from CWD infected animals. Read more information from the CDC about CWD.

Hunters should not harvest animals that appear sick, nor should they eat meat from suspect animals. The DWR advises hunters to take these simple precautions when handling the carcass of any deer or elk: 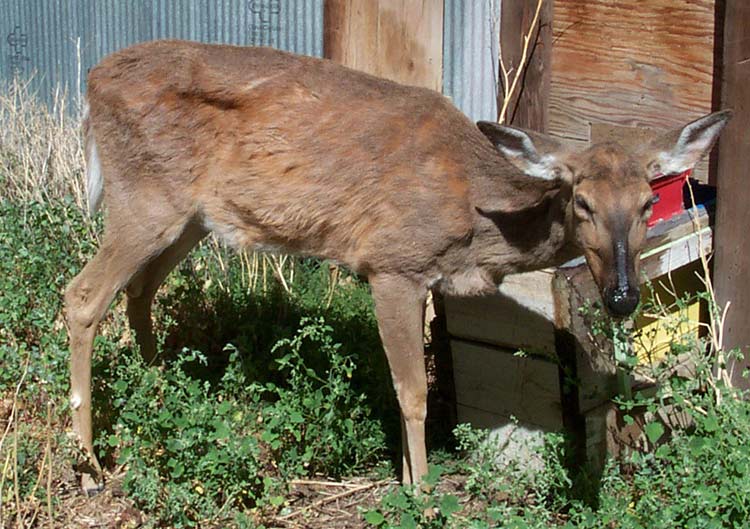 What is DWR currently doing about CWD?

The DWR has a monitoring and management plan for CWD that shares factual information with the public, provides early detection, and prevents or minimizes the spread of the disease.

As of 2020, all units will be sampled on a 5-year rotation, including CWD-positive units. The objective of this type of targeted surveillance is to sample an adequate number of deer that will allow the detection of even a small occurrence of CWD with a high degree of confidence. The removal of symptomatic animals continues on all wildlife management units throughout the state annually. Hunters can help with CWD surveillance efforts by stopping at hunter check stations and allowing the DWR to sample their deer.

The medial retropharyngeal lymph nodes of mule deer in all sample units, as well as elk from positive deer units, are collected. All samples are sent to the Utah State University Veterinary Diagnostic Laboratory (UVDL) in Logan, Utah, for analysis. UVDL has been approved by the National Veterinary Sciences Laboratory (NVSL) to test for chronic wasting disease. UVDL uses the IDEXX HerdChek CWD Antigen EIA (IDEXX Laboratories, Inc., Westbrook, ME) and the PRECESS 48 system, (Bio-Rad Laboratories, Inc., Life Science Group, Hercules, CA) as rapid tests. Any positives that are detected by the Bio-Rad or IDEXX systems are verified using the "gold standard" Immunohistochemistry (IHC) assay test.

It is unlawful to import dead mule deer, white-tailed deer, elk, moose, caribou, reindeer, or their parts, except for the carcass parts listed above, from states or provinces where CWD has been detected:

Non-residents transporting harvested deer, elk, or moose carcasses through Utah may do so if they do not stay in Utah more than 24 hours, do not leave any part of the animal carcass in Utah, and do not have their deer, elk, or moose processed in Utah.

How can hunters help?

Immediately report all deer that appear sick or emaciated to a DWR office, biologist or officer. The DWR will attempt to locate the animal and remove a tissue sample from the head for testing.

Hunters harvesting animals from areas where testing is needed may be requested to cooperate by removing the cape from the deer or elk in the field or by taking the head to a Division office immediately after it is caped. The DWR can then remove a lymph node sample for testing.

Can hunters have their deer or elk tested for CWD?

The DWR has implemented an aggressive surveillance plan to target deer in specific units throughout the state. CWD infection in the endemic areas of Wyoming, Colorado and Nebraska are found in less than one percent of wild elk populations and one to 15 percent of wild deer populations. Therefore, testing strategies mainly target deer and not elk, although the DWR will test any deer or elk exhibiting clinical symptoms of CWD. Hunters who have harvested a deer in one of the CWD sampling units, or who harvest an elk in a CWD-positive area, are requested to take their animal to the DWR's Salt Lake, Ogden, Vernal or Cedar City offices (appointment required) or to a wildlife check station to have a tissue sample removed for testing. To qualify for testing, the animal must be older than one year old and the lymph nodes must be intact without having rotted. Hunters may view the results on the Internet after allowing six to eight weeks for processing.

Hunters who harvest an animal in a non-target sampling unit, but still wish to have their deer or elk tested for chronic wasting disease, may do so at a cost by providing the head to the Utah Veterinary Diagnostic Lab in Logan, Utah or the Utah Veterinary Diagnostic Lab in Spanish Fork, Utah. In this case, the DWR will remove a sample from any harvested deer or elk, but the hunter is responsible for getting the sample to the lab and for paying the $25 testing fee. Deer and elk must be older than one year of age to be eligible for testing.