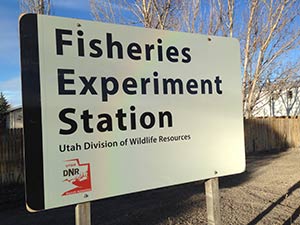 The Fisheries Experiment Station was created in the early 1960s to provide technological development and extension support for the Utah State fish culture program.

The mission of the Logan, Utah, station has expanded over the years and now includes fish health management and fish disease control, fisheries research, training, specialized fish culture and administrative involvement with the Utah Division of Wildlife Resources Aquatic Staff.

Fish disease was a serious problem in Utah aquaculture for many years. There were no regulations restricting transportation of diseased stocks. Improved transportation and shipping began to facilitate more and more intrastate, interstate and international shipment of life fish and eggs along with the diseases. What were numerous local problems rapidly become interstate and international problems. Artificial diets were not adequate and fish culture methods were poorly defined. There were very few government and no commercial laboratories and pathologists involved in fish disease research and control or in development of diets and culture method in the fifties and sixties.

The old Utah Department of Fish and Game saw a need for quality assurance and fish disease control in the late fifties. They conceptualized, built and staffed the Experimental Hatchery in Cache Valley in 1961. The facility was later renamed the Fisheries Experiment Station (FES). It has grown substantially over the last thirty years.

This program, since its inception in the early 1960s has been involved in many activities which have served indirectly in fish disease control, aquaculture, fish quality assurance, fish health management and fisheries management. It has had an active research and development role since its beginning. It was involved in intense diet/feed testing for many years. It was involved in development of characterized, fish health approved brood stocks. It has provided extensive training for DWR employees. Fish health assessment has been monitored through use of the Health/Condition Profile developed at the Station and in use in nearly all aspects of the fishery management scenario in Utah. It has been taught to thirty two different states and numerous federal agencies. The program is well known and connected to the international fish health community.

The program was split into Research, Fish Health and Fish Culture in 1986. All three of these operate under the direction of the Fish Pathologist/Director.

Want to learn more? Listen to the DWR "Wild" podcast!