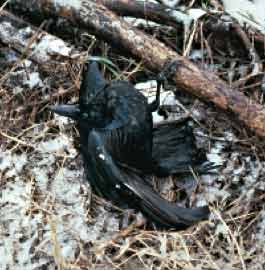 Avian cholera (fowl cholera, avian pasteurellosis) is caused by the bacterium Pasteurella multocida, and is highly infectious to other wild birds. Acute infections are common and can result in death 6 to 12 hours after exposure. Large and rapid die-offs involving over 1,000 birds per day often occurs during cholera outbreaks.

The bacterium is transmitted by direct bird-to-bird contact, ingestion of contaminated food or water, scavenging of carcasses, and aerosol form. The bacterium can persist in the environment for weeks after an avian cholera outbreak. Waterfowl are the birds most commonly affected by avian cholera, but it is likely that most species of birds and mammals are susceptible to differing degree. Avian cholera is not considered a high-risk disease for humans, although persons around carcasses should wear gloves, wash hands thoroughly, and work outdoors or in well-ventilated areas.

When large numbers of dead waterfowl are found in a short time and appear in good flesh, avian cholera is likely the cause. Due to the acute nature of the disease, few sick birds are seen during avian cholera outbreaks, though the number of sick birds seen increases if the die-off is prolonged over several weeks. Sick birds are often drowsy, lethargic, and can be easily approached. Other signs include swimming in circles, erratic flight, mucous discharge from the mouth, pasty or yellow colored droppings, or bloodstained droppings or nasal discharge.