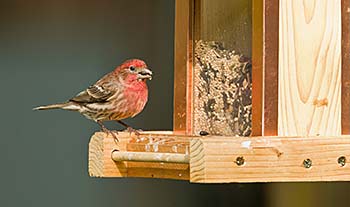 Feeding birds is a popular hobby and a great way to enjoy and appreciate wildlife at home. Dirty home bird feeders are also a way that avian diseases can spread.

Clean feeders once per week using a bleach solution. (one part bleach to nine parts water). Rinse thoroughly, allow feeders to dry before refilling, and remove waste grains from the ground below the feeders. If a die-off has occurred, use stronger solution (one part bleach to three parts water), clean more frequently (every one to three days), and remove waste grains daily. Also, consider discontinuation of feeding for seven to 10 days. Watering stations (bird baths) should receive fresh water daily and be cleaned and disinfected weekly.

SALMONELLOSIS: (bacterial, winter and spring at feeders, year-round near water) — Frequent in songbirds

CONJUNCTIVITIS: (Bacterial, year-round) — Primarily known from House Finches but may infect other songbirds

LEAD: (Contaminant, year-round) — Rare in songbirds, but can be frequent in raptors

Other sources of bird mortality

COLLISIONS: Building window strikes account for millions of bird deaths each year. Birds that may have collided with a window of your home will often be found on the ground below the window and behave dazed, disoriented, lethargic, and/or dead. Collisions with cars and wind turbine rotors are also sources of bird mortality.