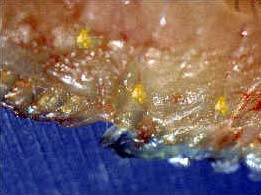 Filet of a bluegill from Pelican Lake showing "grubs" in its flesh.

Anglers sometimes call to inquire about the appearance of yellowish cysts they notice in the muscle of fish caught at Pelican Lake and a few other waters in Utah. These cysts are the intermediate stage of a trematode parasite called Clinostomum complanatum, more commonly known as "yellow grub." Aquatic snails act as the first host of the parasite. Many species of fish or amphibians can serve as the secondary host. Bluegill and largemouth bass at Pelican Lake are the species commonly observed with the problem. Aquatic birds such as herons, bitterns and gulls act at the final host for the adult parasite.

The parasite can cause localized tissue damage to the muscle or internal organs of the fish, but are not life threatening if present in low to moderate numbers. The parasite is often noted more in the spring to early summer, after which their numbers decline.

Yellow grubs can be treated in hatchery fish, but fortunately, none of Utah's State hatcheries have this parasite. There is no effective way to remove yellow grub from wild fish in a lake or stream.

Although infected fish may not appear appetizing, there is no reason not to keep an infected fish for human consumption. With careful trimming of affected areas and normal cooking procedures, the fish can provide a safe and delicious meal.