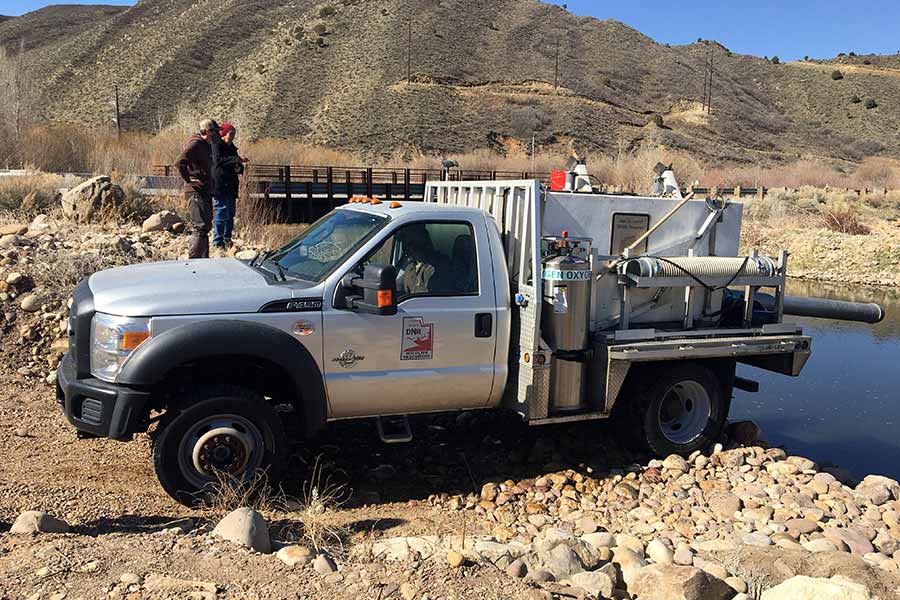 Similar to last year, the DWR is again strategically determining where fish will be stocked this year, in order to either reduce or eliminate fish from being stocked into waterbodies where we think that summer fish kills are possible due to low water. The smaller amount of water heats more quickly and warms to higher temperatures than when there isn't a drought. This is bad for fish because warm water holds less oxygen than colder water. The combination of high temperatures and low oxygen can stress fish, causing poor growth and disease. Fish can also die when temperatures are too warm or the oxygen levels get too low.

The DWR consulted various water users, surveyed current water levels at reservoirs across the state and also looked at the history of water management at specific local waterbodies. Using that information, DWR fisheries managers identified waterbodies that are projected to have low fish survival or poor angler access later in the summer, due to low water levels. As a result, the DWR will either reduce or eliminate stocking fish into those waterbodies in an effort to decrease the number of fish impacted by the low water levels. The fish that were scheduled to be stocked into the drought-impacted lakes and reservoirs will be relocated and stocked into other waterbodies around the state that won't have low water levels.

"The best management action we can take at these waterbodies is to reduce the number of fish in these waters because when water levels are low, we are more likely to maintain a fishery that has fewer fish than one that has a lot of fish," DWR Sportfish Coordinator Randy Oplinger said. "We try, whenever possible, to continue to provide a good fishing experience for anglers, up until we think that water levels will hit a critical level. Then, we want to reduce the number of fish in that waterbody by decreasing the number of fish that are stocked there. We are hopeful that anglers will catch and harvest most, if not all, of these stocked fish by the time water levels become so low that fish survival is impacted."

Many of the waterbodies projected to have low water levels this year are the same ones that were low last year. Due to increased daily catch limits implemented at those waterbodies last summer, there are already fewer fish in these lakes and reservoirs.

"The number of fish in these waters is lower this year than it was at the same time last year, due to last year's drought, fish stocking changes and the temporary harvest limit increases we implemented," Oplinger said. "We feel at this time that emergency fishing regulation changes to increase daily catch limits are not necessary on these waters because of the already reduced number of fish. However, we are going to re-evaluate conditions at the end of June and, if necessary, we may make additional stocking changes or even issue emergency fishing regulation changes, as needed."

The DWR is also looking at long-term solutions for managing fishing at waterbodies that are repeatedly impacted by low water levels. Some of those solutions include: