Herd growth is a top priority for wildlife managers

Mule deer numbers are declining across the West, and recent deer hunts have been difficult for many Utah hunters. The Utah Division of Wildlife Resources (DWR) takes hunters’ concerns very seriously and is focused on improving deer-herd numbers. 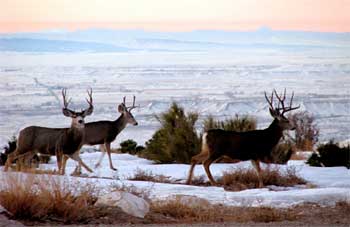 This issue has been — and continues to be — a top priority for Utah's wildlife managers. Over the past eight years, the DWR has invested more than $100 million to implement a comprehensive deer-management plan and to help our struggling herds. This sheet provides a quick overview of the DWR’s ongoing, multi-pronged effort to help Utah’s mule deer.

The DWR has launched a massive effort to restore mule deer habitat. It's the largest such initiative ever undertaken in Utah — and in the West. Over the past six years, the DWR and its many partners have improved mule deer habitat on more than 1.2 million acres, at a cost of more than $130 million. Habitat-improvement projects often take a few years to pay off, but over the long term, this effort will result in healthier deer populations statewide. The current Utah deer-management plan (effective 2008–2013) includes an objective to improve another 500,000 acres of habitat.

Coyotes and other predators pose a substantial threat to mule deer fawns, which is why predator control is an important part of Utah's deer management program. In the last six years, the DWR has provided $3.4 million to USDA Wildlife Services to control coyotes in areas that are important to our deer populations. Last year alone, Wildlife Services killed more than 2,000 coyotes in critical deer habitat areas, with the guidance of DWR biologists. The DWR is providing additional funding to expand its predator-control efforts in the future. 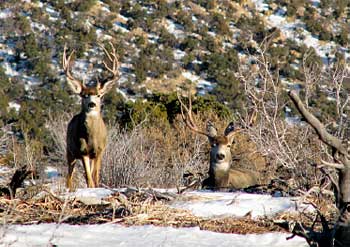 Deer-auto collisions are responsible for the deaths of thousands of deer annually. The DWR is working closely with the Utah Department of Transportation (UDOT) to reduce highway mortality. Since 2005, UDOT has spent more than $47 million on fencing, highway-bypass structures and other activities to help both mule deer and elk. The DWR is also funding two Utah State University studies. One will identify the most effective types of highway-bypass structures, and the other will attempt to determine how many deer are killed on Utah highways each year.

The DWR has put more resources into catching serial poachers who steal deer from Utah sportsmen each year. Conservation officers have made several high-profile arrests of serial poachers who unlawfully killed multiple deer. Sportsmen have played a key role, alerting officers to illegal activity and improving law-enforcement success. This winter, officers have worked closely with sportsmen and spent more than 5,800 hours to protect mule deer on winter range. As a result, the number of illegal deer kills dropped from 72 in 2010–2011 to 57 for the 2011–2012 season.

Limiting the spread of disease

Diseases can devastate deer populations. The DWR has spent more than $1 million over the last six years to research and monitor for chronic wasting disease and other diseases that affect mule deer. 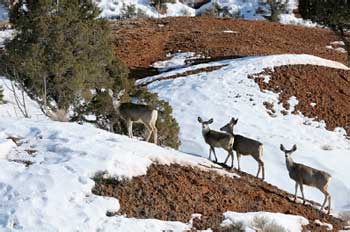 In recent years, the DWR has launched research projects to better understand the factors that negatively affect mule deer populations. In 2010, the DWR began a multi-year statewide radio-telemetry study to better understand the annual survival of both does and fawns. Another study, focused on Monroe Mountain, will begin in 2012 and assess how newborn fawn survival is affected by coyote control. The DWR is investing approximately $400,000 per year in these projects and has already collected valuable data about statewide doe and fawn survival.

Starting in early December each year, the DWR monitors individual mule deer herds on a weekly basis. Biologists look at both the deer and their winter range, assessing the following factors: snow depth, area temperatures, availability of forage, body condition (fat measurements) and depredation issues. If the deer fall below certain pre-established thresholds in three or more of these categories, the DWR is prepared to begin a supplemental feeding program to help them through the season.