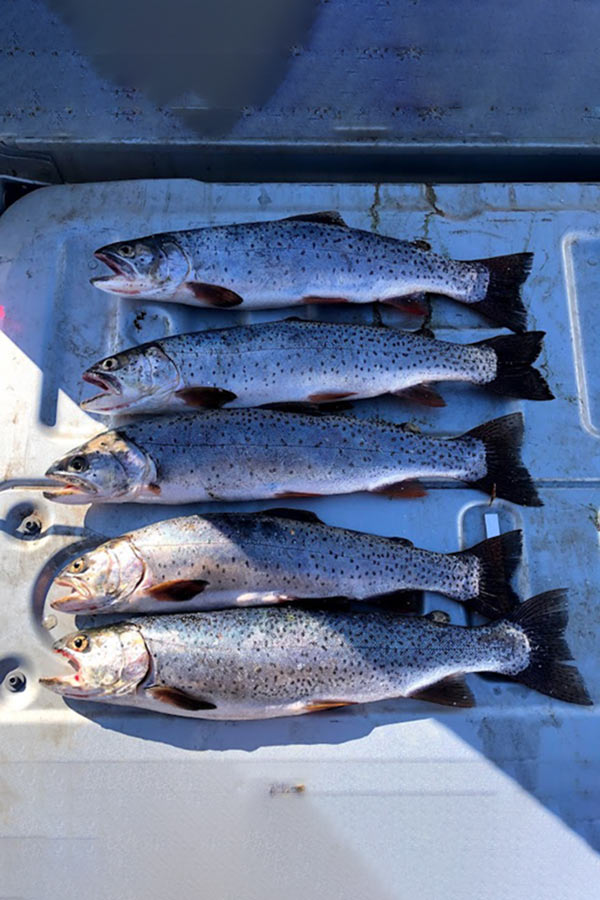 How we caught suspects in three notable fishing cases

In Utah, we have a 365-day fishing season, which means life is never dull! As a relatively new conservation officer, I've encountered some wild fishing enforcement cases in the past couple of years. Here are a few that really stood out:

Last fall, I had just gotten home from a long day of patrolling, so I dropped onto my couch to catch the final quarter of the football game.

Right then, my phone began to ring. Summit County Dispatch was calling to let me know that a Utah Highway Patrol trooper had just pulled over a man for speeding. Why did they call me? The trooper noticed that the speeder — we'll call him John — had a backseat full of fish.

The trooper could see that John had likely gone over his fishing limit. Dispatch gave me the trooper's phone number and his location, so I called the trooper and drove to the scene.

Upon arrival, the first thing I noticed was that all the fish in John's bag were kokanee salmon — bright, red kokanee salmon. (During the fall, kokanee change colors, morphing from silver to red as they prepare to swim up the river and spawn.) It is almost impossible to mistake the ruby red kokanee for anything else.

I started chatting with John, and he claimed to have caught all the fish at Strawberry Reservoir. 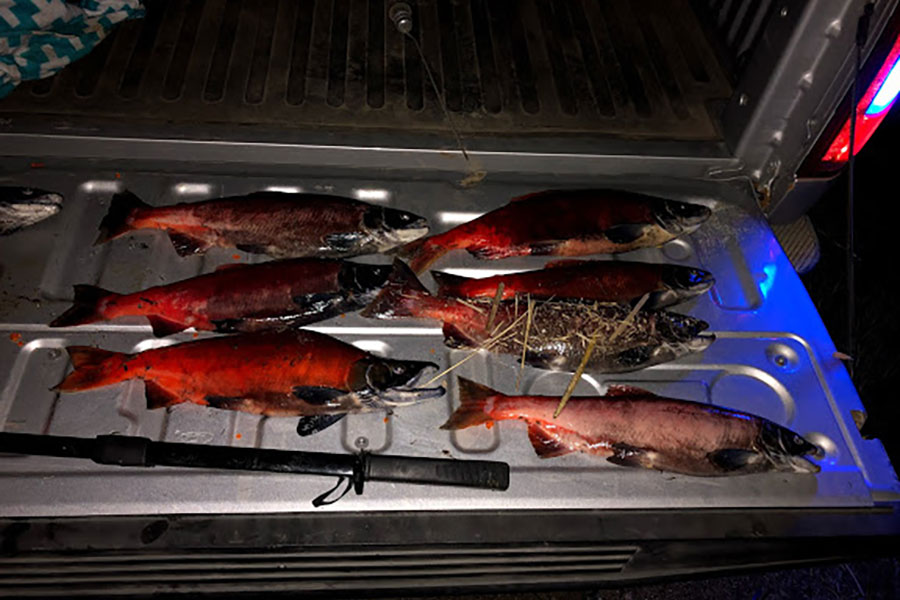 It is illegal to possess kokanee salmon during their fall spawning season. See the Utah Fishing Guidebook for season dates.

It is illegal to possess kokanee salmon during their fall spawning season. See the Utah Fishing Guidebook for season dates.

Then, after a brief discussion, he revised his story and admitted to netting and keeping eight salmon from one of the tributaries flowing into Strawberry. This was problematic for three reasons:

I cited him with Wanton Destruction of Protected Wildlife, a charge we use when the offense is serious. And given the circumstances, it definitely applied.

The Wasatch County Justice Court agreed, and John was charged with a misdemeanor. He also went through the DWR’s license suspension process and received a one-year suspension of his fishing license.

This was a poacher we wouldn't have caught without the help of a Utah Highway Patrol trooper. I was grateful for the assistance and hope to return the favor someday.

Some cases require months — or even years — of investigative work. Those cases are extremely rewarding in a long-term kind of way.

On the other hand, some cases last less than 20 minutes. These "simple" cases are still pretty satisfying.

One such case happened at Strawberry during ice-fishing season. The fishing was hot, and anglers were all over the ice.

During the winter, most of the issues I encounter involve the cutthroat trout slot limit. At Strawberry, you cannot keep any cutthroat trout measuring 15 to 22 inches (a measurement range known as the slot limit). The reservoir's cutthroats prey on Utah chubs, a species that can outcompete rainbow trout and kokanee salmon. When the cutthroats are larger, they do a better job of keeping chub numbers in check.

In other words, the slot-limit law is in place to help keep Strawberry a great place to fish!

Most winter days, you'll find me out on a snowmobile, visiting with anglers miles from the nearest road. But on this frigid Saturday, I was in my truck, heading toward Strawberry Bay Marina and dreaming of a hot cup of coffee.

As I neared the marina, I noticed four people packing up their fishing gear. It seemed like a good time to stop and chat. The coffee could wait.

I started talking to the four men (we'll call them Bob, Andy, Dan and Mike) and asked about their trip. Bob stated they had caught some "keepers."

It is illegal to keep cutthroat trout at Strawberry Reservoir if they measure 15–22 inches long. See the Utah Fishing Guidebook for all regulations at Strawberry.

It is illegal to keep cutthroat trout at Strawberry Reservoir if they measure 15–22 inches long. See the Utah Fishing Guidebook for all regulations at Strawberry.

Immediately intrigued, I asked the group if they had kept any fish. Bob abruptly said, "No," while his buddies nodded in agreement.

I checked all their fishing licenses and asked to inspect their fishing equipment, which was in a sled in the bed of the truck. Bob began showing me all of the equipment.

When he thought I was busy, I noticed Bob pull a bucket out of the sled and move it off to the side.

After I inspected the sled I stated, "Well, looks like everything is good here. You don't mind if I just check the bucket, right?"

Bob reluctantly allowed me to look in the bucket. Inside were 11 cutthroat trout.

At that point, Bob apologized for lying and stated he did not want me to see the fish because there were some cutthroat trout that might be in the slot limit.

I gave Bob a citation for Wanton Destruction as well as a measuring tape for future use.

As the case went through the judicial system, Bob and Andy paid hundreds of dollars in fines. Both of them went through the DWR’s license suspension process, and their fishing privileges were suspended for two years.

My patrol district includes the Strawberry Valley, and I love protecting the incredible fish and wildlife in this part of the state.

With that said, I also enjoy opportunities to venture out of my district and ride along with other officers. It gives me the chance to build friendships, learn new things and see a wide variety of Utah landscapes.

One of my favorite places to help patrol is the Uinta Mountains. I really enjoy this rugged area. You can hike scenic trails, explore hidden lakes, watch cliff-climbing mountain goats and, most importantly, meet some really interesting people.

One day last summer, I joined Officer Olson on a day patrol up in the High Uintas. While driving around Smith and Morehouse Reservoir, we noticed two individuals fishing. It was almost lunchtime, so we figured we'd keep an eye on them from a distance while we grabbed a bite to eat.

It wasn't long before one of the individuals noticed our truck. (We weren't exactly hiding.) The two fishermen started talking to one another and began packing their gear. They looked back at our vehicle every few seconds.

Knowing that something was off, we put lunch away and drove over to their location. Officer Olson suggested that we talk to the men separately. Once on the scene, I started talking to the younger angler — we'll call him Brian.

After checking Brian's fishing license, I noted Brian was 21 years old. I asked Brian if he or his father had kept any fish. Brian looked over to where his dad was standing. His dad was preoccupied with Officer Olson.

After a brief moment of looking at me, then to his dad, and then back to me, Brian sighed and stated, "Yes, we have a couple of fish."

Brian took me to the edge of the water where a stringer full of fish was visible. Pulling up the stringer, I only saw seven or eight fish. Then, pulling a little harder, I realized there was a lot more weight still in the water.

I ended up pulling out 21 rainbow trout. I told Brian that he must be a good angler to catch all these fish. After a few more questions, Brian admitted that he knew the limit was "somewhere around four fish." He also admitted to catching 15 out of the 21 fish on the stringer. 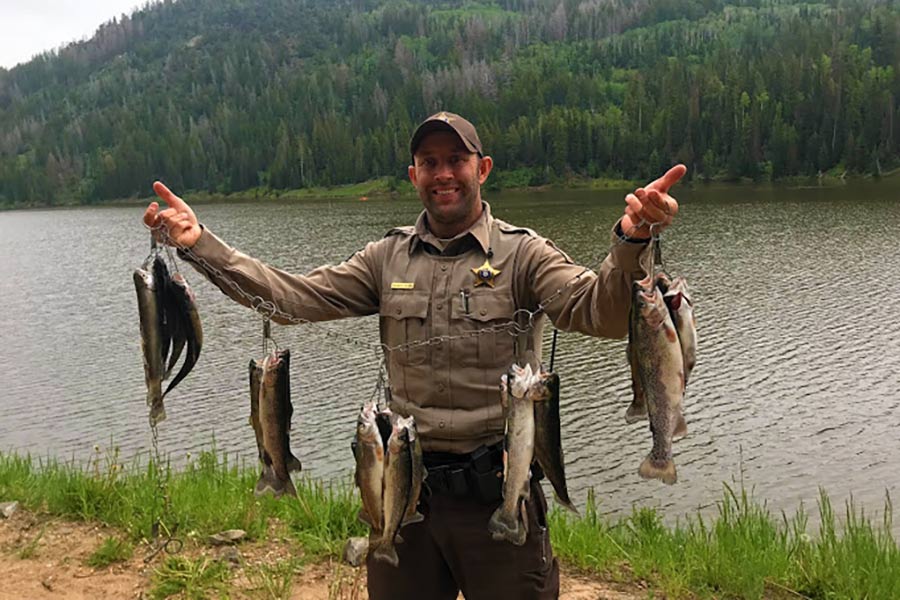 It was a surprise to find 21 trout on the stringer. We were glad to be able to donate them.

It was a surprise to find 21 trout on the stringer. We were glad to be able to donate them.

When I reconvened with Officer Olson, Adam was claiming he had only caught and kept four fish total. I told Adam that Brian claimed responsibility for 15 trout, which meant he had caught and kept six.

Adam insisted that his son had caught more and was lying. At that moment, I felt bad for Brian. His dad was apparently willing to throw him under the bus to avoid getting in trouble.

Brian stepped up and told his dad to stop lying, and tell us the truth. Eventually, Adam admitted he had caught and kept six of the 21 fish.

We wrote Brian and Adam their citations and confiscated the fish. It was probably an awkward trip home for the father and son.

This was an instance where the son — despite breaking the law — told the truth from the beginning. His father did not. Intentional involvement in a wildlife crime and then lying or taking steps to cover it up can sometimes get you into more trouble than the original offense!

This case ended on a positive note because the fish did not go to waste. We were able to donate them to provide meals for those in need.

It's kind of funny: The more time I spend enforcing wildlife laws, the more I learn about people. Even though this post was about some of the suspects I've encountered, there are great hunters and anglers here in Utah, and they really care about our wildlife.

I've met so many law-abiding people who are willing to reach out when they see something wrong or illegal. And I think I can safely speak for all our officers in saying we're grateful for the help. If you need to report a wildlife crime, call our hotline at 1-800-662-3337 or submit your report online. 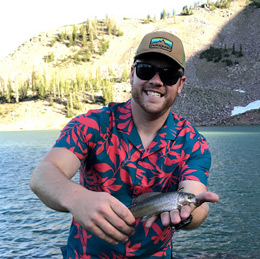 McKay works as a conservation officer with the Utah Division of Wildlife Resources. In his spare time, he enjoys hiking with his friends and his two dogs.