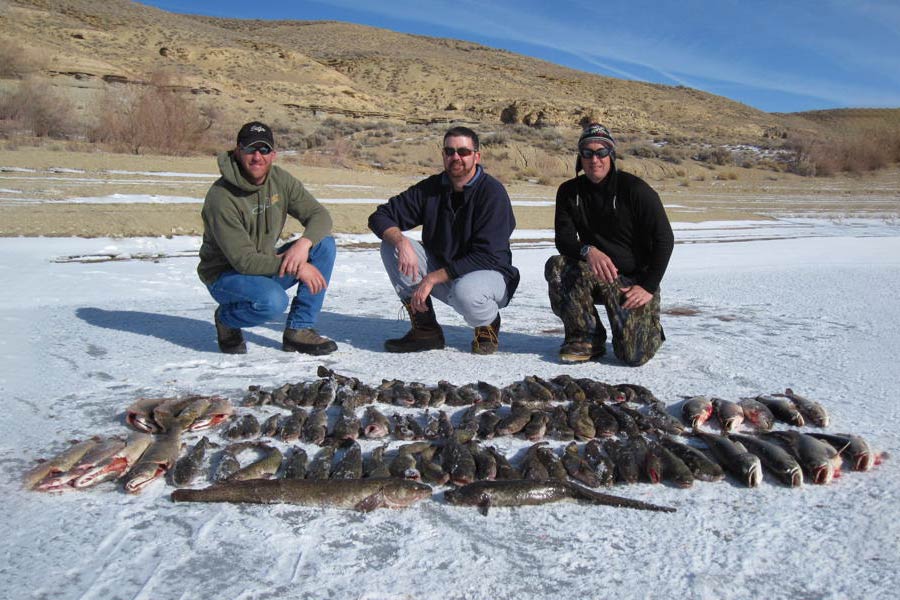 How do I catch those burbot?

I get asked the question a lot this time of year: "How do I catch those burbot?" Not that I don't enjoy talking to anglers from different walks of life, but my response is now pretty much "cookbooked," and I figured my "recipe" would make a good blog post to be referenced in the future. In addition, inquiring anglers should note that several articles, forum posts and videos focused on catching burbot in Flaming Gorge are out there, too.

First things first. Burbot are invasive and abundant in Flaming Gorge, causing problems for some of the sport fish there. Under these circumstances, a dead burbot is a good burbot, and during this time of year, angler harvest is the most available weapon to reduce their impacts on the fishery.

When it comes to fishing for burbot, they are rather easy to catch, can provide a lot of sustenance (unrestricted creel limits) and are actually very tasty in a variety of recipes (boiled, fried, in chowders).

Ironically, burbot are considered an elusive fish within their native range west of the Continental Divide, and many anglers have never even seen one, let alone caught one. Due to their abundance and subsequently high catch rates in the Gorge, this burbot fishery is very unique relative to other fisheries across the country, providing a one-of-a-kind fishing opportunity.

To clear the air some more, burbot are really not a technical species relative to other sport fish in the Gorge. They are most active in the winter, at night, in shallow water, and will eat almost anything that swims in front of their ugly faces. It really doesn't get much simpler. 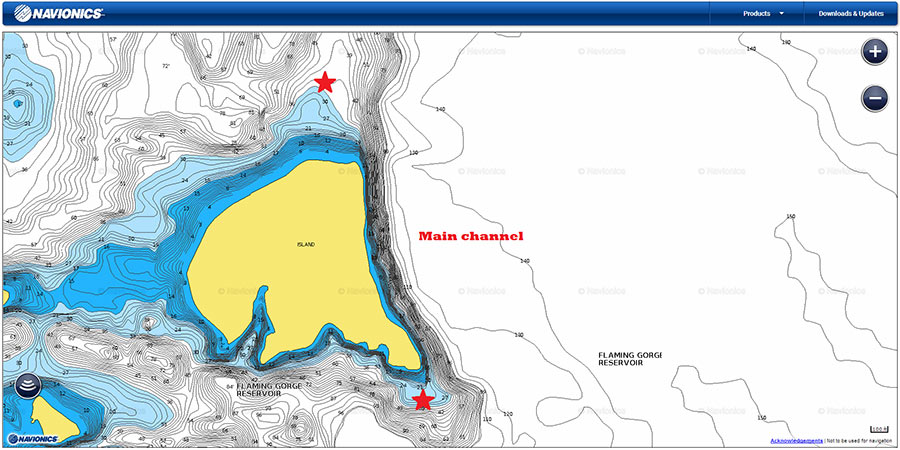 Habitat types and locations for burbot at Flaming Gorge.

Habitat types and locations for burbot at Flaming Gorge.

In the initial stages of any fishing or hunting trip, I look at maps so I know where to go and how to get there. If you’re planning to head out for burbot, consider buying a Flaming Gorge Map by Fish-n-Map Co. It not only shows reservoir contours, but most of the roads that can be used to access the reservoir.

Although you can catch them in a variety of ways, nighttime ice fishing is probably the easiest, safest and most effective time to target them. They are also commonly caught in late fall and early spring while nighttime fishing from boats!

Where to find burbot

Burbot are most frequently caught adjacent to rocky, main lake structure with a gradual, tapering slope. If you've fished for smallmouth bass, it's the same structure you would target them. Burbot feed mostly on crayfish and even small bass in the Gorge, so it makes perfect sense, right? I like to locate this habitat type where the old river or main channel sweeps closest to shore. I believe these areas offer burbot deep water refuge during the day, and shallow water areas immediately above and below where they prowl for prey at night. See the map for a clearer picture of what these starred areas look like.

There are other areas to catch them; in my experience I just find these types of areas to be more productive.

So you're at your preselected spot, you're looking at the ice — now what? Hopefully you're there well before dark so you can start your preparations early. First, I try to avoid fishing areas that have already been hit, characterized by a lot of old holes close to the bank. I also do all my augering before the sun sets, so I'm not spooking fish in shallow water. I drill holes ranging from 10 to 40 feet, with most of the success coming around 20 feet. I've caught burbot as shallow as 5 feet and as deep as 91 feet, so anything is possible. It's not uncommon for me to auger up to 20 holes allowing me to spread out my search pattern either with stationary gear or by ice trolling (hopping from hole to hole, actively jigging for about 5 minutes). 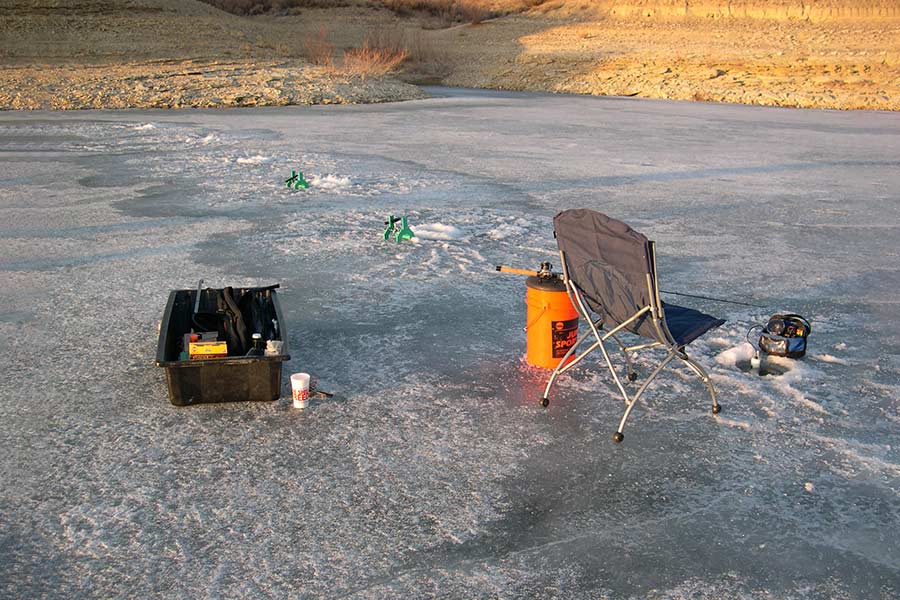 Ready to fish before sunset. Photo by Clay Perschon.

Ready to fish before sunset. Photo by Clay Perschon.

Remember, when you're on the ice on Flaming Gorge in Utah or Wyoming, you can use up to 6 poles or tip-ups. Take advantage of this special provision, which should help you locate and put more burbot on the ice. After augering holes, I set up five poles or tip-ups in varying depths and start jigging with the sixth, awaiting the first bite of the evening. Sometimes active jigging catches the most burbot, and other times stationary or dead-sticked presentations prove more successful.

Here's what you need to know about gear. Medium to medium/heavy power rods with 6+ pound line should provide a quick, rigid hook-set for these hard-mouthed fish. When it comes to bait, if it glows and stinks, burbot will likely hit it. Overall, my most productive lures are Northland Buckshot spoons in Super-glo colors and Gary Yamamoto 4-inch single tailed grubs in Luminous white (glow), each in 3/8 oz. weights. Tip these offerings with sucker or chub meat, but not too much that you fill the gap on the hooks. Filling the gap with bait will reduce hook penetration. As the evening progresses, recharge or re-bait frequently to keep things fresh. Burbot will commonly hit after dropping your refreshments! Place your offering just above the bottom, and I mean within just a few inches. Burbot are prowling the bottom substrate, so you want them to run into it — not swim underneath it.

Some things that can really help you keep a handle on your gear at night are lights that shine on your rod tips, and even bells rigged on your tip-ups. Wear a bright headlamp or carry a flashlight to shine your gear and glow your lures. Finally bring a towel to handle these slimy fish, and a large trash bag or cooler to haul your catch home.

Be safe, and know the rules

When it comes to ice fishing, especially at night, you'll want to make sure to let someone know where you're going and when you'll return. Also pick up the latest guidebook for the state where you're fishing, and don't forget to update your fishing license. Most importantly, have fun with family and friends on the ice, and thanks for doing your part to help us rid the Gorge of a few more burbot. 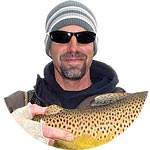