The mulie bounded across the road in front of us. Powerful leg muscles flexed under her summer coat, propelling her through effortless 20-foot arcs. Five heads swiveled to watch the deer, some of them lurching from reclined positions of slumber.

"I doubt she has a fawn," I grumbled. I judged that the doe was moving far too fast to have a wobbly newborn in tow. A collective sigh filled the truck. Two people slumped back to sleep and a third resumed texting. 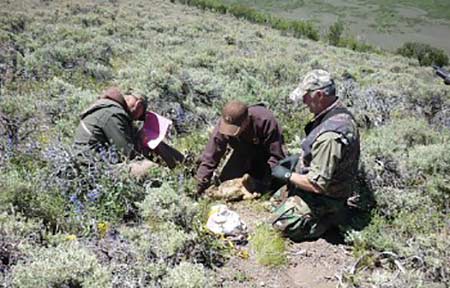 DWR biologists capturing a fawn in another location.

DWR biologists capturing a fawn in another location.

Then again, I thought, she did look a little panicked. Something gnawed at my subconscious, demanding attention. Though I couldn't have quantified the intuition, I sensed there was something more to the situation than a deer crossing the road.

When the doe had appeared, I was busy working the gears of a DWR Ford F-150, easing us down a narrow, rock-strewn dirt road situated on a ridge of Mormon Peak. Given the risks of driving in steep mountainous terrain, I dismissed the doe and returned my attention to the truck. But there remained a persistent buzzing in the back of my skull.

A few seconds passed and the truck rolled another fifteen feet. Suddenly, I gasped and hit the brakes. We slid to a bumpy stop. I blinked my bleary eyes, forcing them to focus. "Fawn! I see a fawn!"

That was the announcement for which everyone had been waiting since roughly 5 a.m. Faces were pressed against every available window.

"Right there," I said, pointing over the dashboard.

"Where?" repeated the three volunteer hunters in the back seat.

"In front of us," I explained.

Nate, an expert deer spotter and fawn wrangler, strained his neck. "Where?"

I turned put the truck in park and turned off the ignition, so I could concentrate on convincing a truck full of people that I was not losing my mind. "It's right in front of us. On the road."

Nate raised himself up in the seat, peered down at the road, and smiled. "Yeah!"

We grabbed the capture bag and stepped out slowly. It became readily apparent, though, that the fawn was too young to run away. It was less than two days old, still weak and completely reliant on motionlessness and natural camouflage for protection.

The five people exiting the truck at that moment — myself, Nate and three volunteer hunters — formed the vanguard of a much larger audience anxiously awaiting data from the local mule deer. The ongoing wildlife study on central Utah's Monroe Mountain, involving not only deer but coyotes and mountain lions as well, involves Utah State University, Brigham Young University, the Utah Division of Wildlife Resources, and a cadre of professors and graduate students.

Yet while we were prowling the central Utah landscape that morning in search of a big game species, we were in fact most interested in the most diminutive representatives, the littlest players on the big game stage: newborn fawns. One of the goals of the Monroe Mountain study is to follow the destinies of neonate fawns in order to determine what's happening to these deer during their first few days and weeks of life.

In order to understand that short, dangerous period of a mule deer's existence, we must catch and mark very young fawns — sometimes less than a day old. Fawns rely on cryptic coloration and immobility to protect them from all predators, including researchers, making finding and capturing them a difficult and time-intensive effort.

So, during fawning time, crews of technicians, students, and volunteers scour the sagebrush and oak brush for mulie fawns. They drive endless dusty miles in trucks and ATVs, hunched over spotting scopes in the sunrise chill and evening haze. Binoculars scrutinize every dark shadow or brushy plant capable of screening a dappled fawn from view. Everything is suspect when it comes to finding fawns: does acting vigilant, does standing in one spot too long, does' gazes lingering in a certain direction, and so on. Normally, a doe on the run was not considered a likely candidate for a new mother, until now.

Nate and I approached the fawn, accompanied by the dedicated hunters. We donned gloves and began to process the little animal, taking its weight and measurements and allowing the hunters to take pictures and help when appropriate. The fawn emitted no distress call, as older fawns often do. The little male did no more than struggle feebly, trying to return his chin to the ground as I held him.

I said that the fawn was trying to hide. That explanation didn't seem to make much sense to the boy. His confusion was understandable. How could this little deer expect to hide from the five people surrounding him? But the fawn wasn't thinking logically. He wasn't formulating a plan of escape. The gangly deer was responding to a supreme evolutionary imperative shared among neonate ungulates across the globe: Stay low. Stay still. Survive.

To avoid stressing him further, we quickly completed our work. Our last task was to slip on a custom telemetry collar specifically designed for the size and growth patterns of mule deer fawns. The collar featured numerous loops closed with fragile tread. As the fawn's neck grows, threads break and loops add to the collar's circumference. Thereby the collar expands, growing with the animal. A weak link in the collar would eventually rot away and drop the device from the adult deer.

I set the fawn down, safely clear of the road, and returned to the truck. I imagined the whole scene: Moments before we'd appeared, the doe had been moving her small, helpless fawn to a new resting site. She expected no disturbance so close to the windy peak of the mountain. She moved slowly, watching the little male struggle along behind her.

Then, suddenly, they heard our truck. The fawn dropped to the ground, blending into the brown background of the dirt road, and froze. The doe moved away so as to avoid altering the big, silver-painted predator to the fawn's location. When we continued to bear down on the little fawn (completely unaware of his presence) the doe finally made a desperate, flashy attempt to distract our attention away from her offspring. She almost succeeded.

I climbed in and started the ignition, sighing with delayed relief. The fawn had been roughly three yards from the truck when we stopped. Another moment and I'd have driven right over him, crushing the fawn without even knowing it.

It may be hard for some to imagine why an animal wouldn't move away from such a deadly situation. I, however, understood. For thousands of years, mule deer fawns have been successfully hiding from predators of all kinds. The success of staying low and staying still has resonated through time, protecting them from contemporary dangers, be it the Cave Lion, the North American cheetah, the stone spear point or the .30-06.

Such responses have served mule deer well for many generations. Today's world, though, is a rapidly changing place. Humanity, for instance, raced from horse-drawn carriages to walking on the moon in fewer than 100 years and sometimes I find myself struggling to keep up. So I can certainly forgive a newborn mule deer buck for being a little confused as to how he should respond to the new-fangled mechanical beasts of Utah's DWR.

In the end, the tiny fawn survived his encounter with the modern world, giving him the chance to employ those ancient, time-tested instincts as he grows and explores Utah's wild landscapes.