Kokanee: to release or to keep?

Fishing for these highly prized fish at Flaming Gorge

During the summer months, kokanee salmon are the "bread and butter" fishery on Flaming Gorge Reservoir. Kokanee preference is as high as 60-percent and many anglers travel from all over the country to fish for these highly prized sportfish.

Flaming Gorge continues to gain popularity for its abundant, trophy-sized kokanee, and in most years, fish in the three- to four-pound range are common. 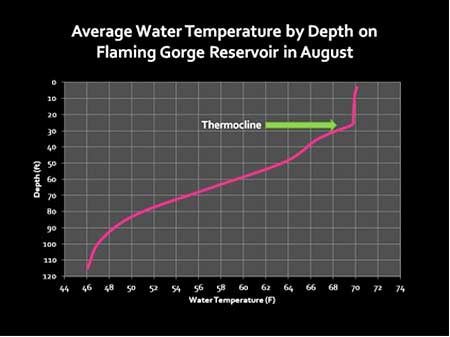 This creates an issue though, being many anglers would prefer to harvest a creel limit (three fish) of the larger size classes, while releasing the smaller, more abundant kokanee in the process.

As summer water temperatures on Flaming Gorge climb into the 70s, catch-and-release mortality for trout and salmon species also increases. Kokanee commonly move deeper in the water column in July and August, seeking out water in the 40- to 50-degree range (see chart).

It's not uncommon to catch kokanee in 60 to 90 feet of water during this time period; therefore, a hooked kokanee may ascend through a 20+ degree temperature change in just a matter of seconds.

As a biologist and angler who spends a lot of time on the reservoir, I have received reports and witnessed kokanee mortalities on the surface of the reservoir during the summer months. Sometimes there are so many dead fish, they look like bread crumbs trailing behind trolling boats. This loss could have population impacts, but taking some simple precautions can minimize it.

To start, all size classes of kokanee provide great table fare, even the small ones. Anglers can simply minimize catch-and-release mortality of kokanee by harvesting a limit of kokanee and then targeting another species like lake trout or rainbow trout. Small lake trout are very abundant in Flaming Gorge, can be caught using similar gear and tactics, and they too provide exceptional table fare. 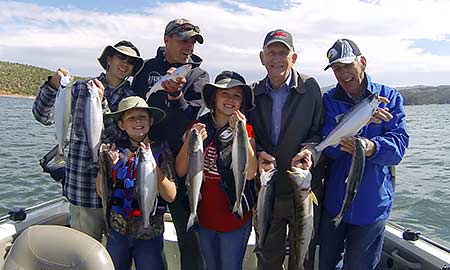 Anglers can minimize catch-and-release mortality of kokanee by harvesting a limit of kokanee and other species.

Anglers can minimize catch-and-release mortality of kokanee by harvesting a limit of kokanee and other species.

If an angler elects to catch and release kokanee salmon, the following suggestions will help decrease subsequent mortality.

Following these simple suggestions will hopefully allow anglers to enjoy their outing on the Gorge and help ensure they still have abundant kokanee to target and catch well into the future!