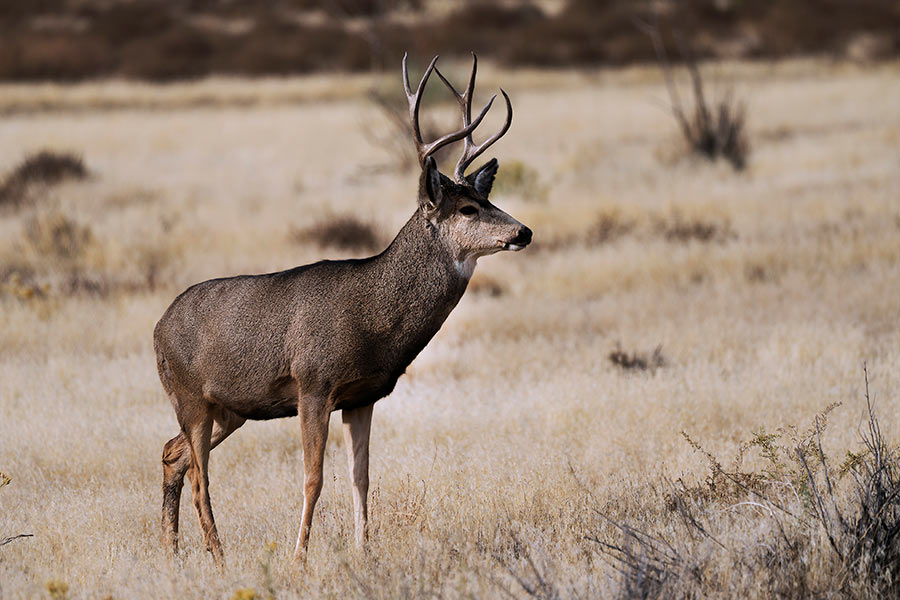 Don't feed deer or other wildlife due to public safety concerns, health of animals

Salt Lake City — Utah Division of Wildlife Resources officials are reminding the public not to feed deer or other wildlife. While it is not illegal to feed wildlife — except for in certain cities that have enacted no feeding ordinances — there are several reasons that it is highly discouraged, including public safety concerns, the spread of chronic wasting disease among deer, elk and moose, and potential harm to wildlife from introducing foods not in their diets, particularly during winter months.

Whenever someone feeds wildlife, those animals will frequently return to that area in search of food. These areas are often near highways and towns — and sometimes even within neighborhoods. Concentrating deer and other wildlife near inhabited areas can sometimes result in increased traffic accidents and other human/wildlife conflicts.

Attracting deer to your property through feeding can also attract predators, like cougars that follow deer herds. And while deer are not predators, they are still wild animals and can be aggressive.

"Help yourself and the wildlife by allowing them to remain wild, and avoid conflicts by not feeding them," DWR Big Game Coordinator Covy Jones said.

Chronic wasting disease is a relatively rare, but fatal transmissible disease that affects the nervous systems of deer, elk and moose. The disease is caused by a protein particle, called a prion, that attaches to the brain and spinal cord. It is caused by the same type of particle as "mad cow disease" in cows. Infected animals develop brain lesions, become emaciated, appear listless and have droopy ears. They may also salivate excessively and eventually die.

Because the prions are shed in saliva, urine and feces, and they can persist in the environment for a long time, chronic wasting disease is easily transmitted in areas where a large number of deer congregate. Feeding deer can cause large groups of them to crowd together in one area, increasing the chance of the disease spreading from one animal to the next.

"Because the disease is so contagious, it is essential that residents do not feed deer or put out food that will attract them," DWR Veterinarian Ginger Stout said. "This includes putting out corn, hay, dog food or birdseed that deer might easily access. Although it may seem like a beneficial thing to do during the winter months, feeding deer actually accelerates the spread of chronic wasting disease because it causes the deer to congregate."

Fortunately, the disease is not widespread throughout Utah, and is primarily found in a few counties in central, northeastern and southeastern Utah. The DWR takes CWD very seriously and conducts extensive monitoring each year to stay on top of the disease and its prevalence in the state. The recently updated and approved Mule Deer Management Plan includes a section on CWD that addresses ways to slow the spread of the disease in Utah.

While the Centers for Disease Control says the risk of transmission from animals to humans is considered extremely low, they recommend not consuming meat from animals infected with chronic wasting disease. Any deer that looks sick (i.e., has trouble walking, drools, has drooping ears or looks emaciated) should be reported to the nearest DWR office. Learn more about CWD in Utah on the DWR website.

Other biological harm to wildlife

Introducing the wrong type of food to wildlife can also harm them, especially during the winter. Deer are ruminants — mammals that acquire nutrients from plant-based food by fermenting it in a specialized stomach before digestion.

Deer have four-part stomachs, and each stomach chamber progressively breaks down woody, leafy and grassy foods into smaller particles. These stomach chambers contain microbes that are essential to digesting food. The type of microbes in a deer's digestive system gradually change throughout the year and are very specific to the food that is available. During the winter, deer primarily feed on sagebrush and other woody plants. Suddenly changing a deer's diet can easily lead to the deer eating food that it cannot readily digest. In these situations, deer often die from starvation with full stomachs.

When deer congregate to feed, it's every deer for itself. The larger deer often push the smaller deer — the fawns — aside, and they often end up receiving less food than they would have received if people had left them alone.

"This is why feeding deer and other wildlife is usually not a good idea," Jones said. "Although it sounds like an act of kindness and may sometimes help some animals get through the cold months, it can often create major problems."

The DWR does occasionally feed deer in specific emergency situations when supplemental feeding is beneficial. For example, deer herds in critical wintering areas that are caught in unusually deep and long-lasting snow might benefit from winter feeding.

When the DWR considers supplemental feeding, biologists carefully analyze whether the benefits will outweigh the disadvantages. If the agency decides to proceed, wildlife managers will allocate the necessary resources, determine special food mixtures and ensure the feeding takes place in an organized, targeted and strategic way that maximizes the benefits to the deer while minimizing the possible adverse consequences.

The DWR sometimes feeds elk during the winter at the Hardware Wildlife Management Area to help prevent local agricultural damage from the large elk herds. However, the elk are routinely monitored and tested for disease, and the feed is specialized so as not to harm the animals.

Find more tips on how to avoid conflicts with wildlife on the Wild Aware Utah website.