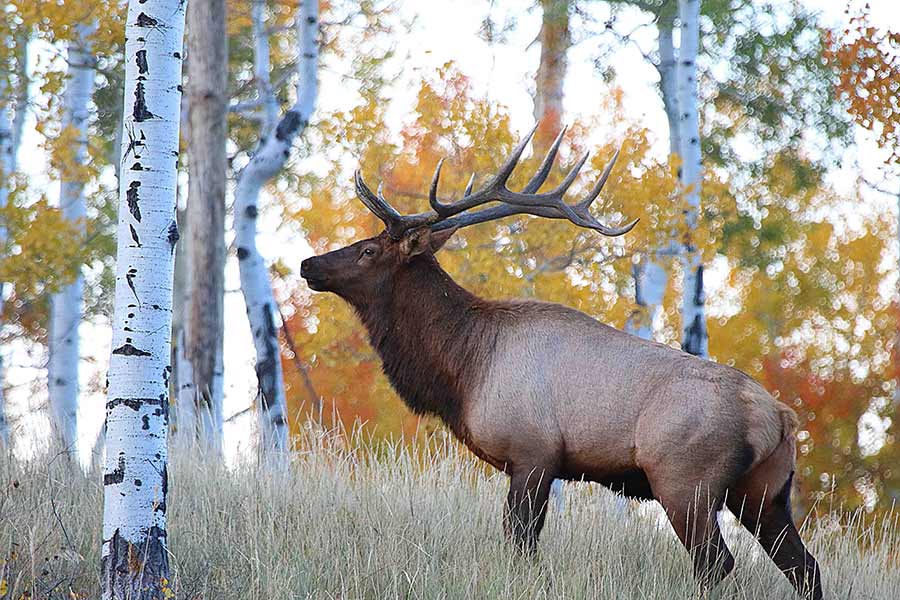 Salt Lake City — The Utah Wildlife Board approved a few changes to the 2021 big game hunts, as well as some other wildlife proposals, during its virtual meeting on Thursday.

In recent years, the general-season any-bull elk permits have been limited to 15,000 statewide. These permits allow hunters to harvest a bull elk on designated any-bull hunting units, using a muzzleloader or any legal weapon. The number of spike bull elk permits were not changed and will still be capped at 15,000 permits statewide.

"We proposed increasing the number of any-bull elk permits after in-depth discussions with the elk committee who wrote the statewide elk management plan. It's a way to expand hunting opportunities for families, strengthen ties to Utah's hunting heritage and provide a challenge for hunters, since this is not an easy hunt," DWR Big Game Coordinator Covy Jones said.

The wildlife board approved some changes to limited-entry elk hunts on seven different hunting units throughout the state, including an archery hunt for all of September. They also approved some boundary changes and several new handgun-archery-muzzleloader-shotgun elk hunting units. The board also approved shortening all any-weapon spike bull elk hunts on the Book Cliffs units to five days from Oct. 9 to 13. They also approved extending the general-season any-bull archery elk hunt by five days for the next two years, and then asked to have the statewide elk committee review this change to determine if it should stay into the future.

Several hunt changes for other big game species were also approved by the board, including the following:

The wildlife board approved the following dates for the 2021 general-season deer hunts:

The DWR typically revises the mule deer unit-management plans from Utah's five regions on a rotating schedule. For 2021, the deer unit plans for the southern region and southeastern region underwent full revisions based on results from the Utah Range Trend Monitoring Project. In addition, the deer unit plans in the other three regions were also revised to meet requirements designated in HB 125, which directs predator management in relation to a unit's deer population objectives and current population estimates.

The DWR's ongoing statewide deer-survival study has provided new insights into the relationships between deer, habitat and predators. As part of that study, DWR biologists and other partners have been able to document the specific causes of deer deaths, as well as measure body condition annually on live deer across multiple units across the state. This information has helped biologists to refine deer population models throughout the state and to better understand the different factors that can limit a deer population's growth in a specific region.

As a result of the study and other feedback, the board approved several changes to the deer population objectives on several units. The new objective provides a more realistic population goal based on current habitat and precipitation conditions statewide, and allows us to manage for healthier deer herds.

The DWR oversees the Cooperative Wildlife Management Unit program, which allocates hunting permits to private landowners who then provide hunting opportunities to public and private hunters for a variety of wildlife species. The CWMU program in Utah has opened more than 2 million acres of private land to the public for hunting. Landowners have an incentive to keep their private range and forest lands as wildlife habitat instead of developing them.

The board approved five new CWMUs for 2021, bringing the total number of CWMUs in Utah to 126. They also approved allocating a total of 2,872 permits for private hunts and 476 permits for public hunters on the CWMUs. The board also voted to request that the DWR and CWMU advisory committee review the CWMUs that currently include public property in their CWMU.

The DWR also oversees the Landowner Association program. This program provides an opportunity for landowners whose properties are located on limited-entry hunting units and provide habitat for deer, elk or pronghorn. Depending on how much private land is enrolled in the program, the landowner can be allocated a restricted number of limited-entry permits for bull elk, buck deer or buck pronghorn on the unit where the landowner's property is located. The wildlife board approved the 2020 LOA permit allocations/proportions for 2021, with the exception of decreased permit numbers due to a decrease in public permits on a unit or acreage, with the exception of those changes being requested by the LOA.

The board also requested that the DWR review how landowner permits are allocated.

Steed announced the appointment of Rory Reynolds as the new DWR interim director. Reynolds, who was appointed DNR deputy director in 2019 and previously served as the DWR assistant director, will serve as interim director beginning Jan. 1, 2021, and will remain in the position until a new director is appointed.

The board also approved some rule changes for waterfowl hunting on two waterfowl management areas in northern Utah:

Changes to the number of conservation and expo permits

Conservation permits are offered to conservation and sportsmen's groups, who then auction them at banquets, fundraisers and other events. The conservation groups provide 90% of the money raised from these permit sales toward conservation and research projects like habitat enhancement, wildlife transplants, aerial surveys and deer survival studies. The expo permits are not auctioned, but rather, are offered once each year though a drawing held at the Western Hunting and Conservation Expo in Salt Lake City. Utahns and non-residents who attend the expo can apply for these permits.

You can watch Thursday's wildlife board meeting on the Utah Department of Natural Resources YouTube channel.