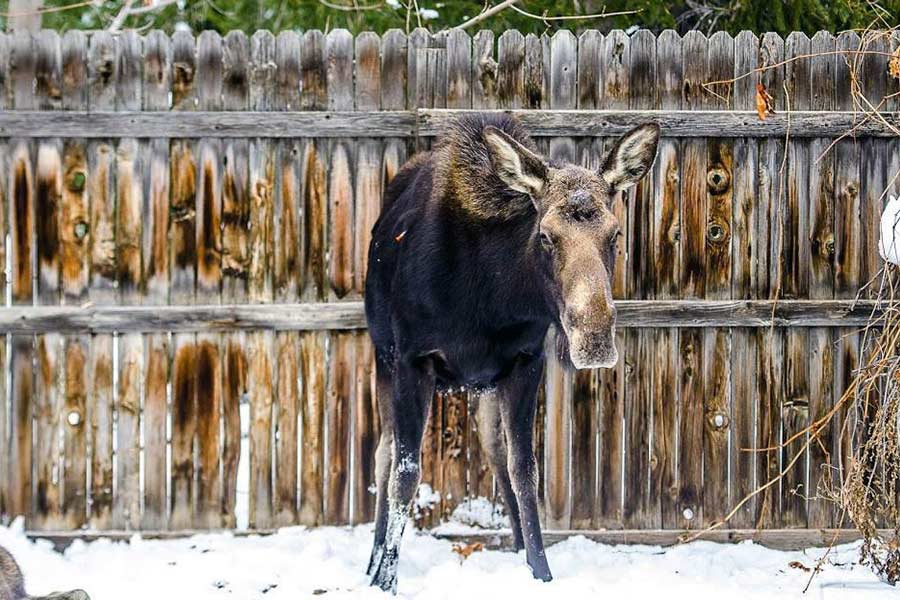 When you should report a wildlife sighting/encounter

Salt Lake City — Utah's growing population and expanding developments have increased the number of wildlife encounters across the state in recent years. However, not every encounter or animal sighting needs to be reported to the Utah Division of Wildlife Resources.

Wildlife encounters during the summer often occur when people are hiking or camping in the mountains or canyons, which are wildlife habitat areas. However, these encounters are also common in cities and other urban areas in the winter. As snow falls in the mountains, deer, moose and other wildlife move to lower elevations looking for food. Cougars, which prey mostly on deer, often follow the deer into the valleys.

While it may seem like these types of sightings are increasing, it is actually a combination of a few things: increased building in the foothill areas and canyons — where wildlife are naturally located — and an increase in the number of doorbell cameras on people's homes, which capture more wildlife sightings that previously went undetected.

If you do see wildlife in your neighborhood or yard, you should always keep your distance for your own safety and for the safety of the animal.

"Getting too close to a wild animal can cause the animal to feel threatened," DWR Law Enforcement Capt. Wyatt Bubak said. "If it feels threatened, it will sometimes act aggressively to protect itself. Plus, because it's harder for some wildlife to find food in the winter, they need to conserve energy in order to survive. Constantly harassing or chasing species such as moose and deer cause them to use up some of the essential fat reserves and energy they need to survive."

Another important way to avoid conflicts and to prevent harming wildlife is to make sure never to feed them. While it is not illegal to feed wildlife, there are several reasons that it is highly discouraged, including public safety concerns; the spread of chronic wasting disease among deer, elk and moose; and potential harm to the wildlife from introducing foods not in their diets, particularly during winter months.

"Whenever someone feeds wildlife, those animals will frequently return to that area in search of food," Bubak said. "These areas are often near highways and towns. Concentrating deer and other wildlife near inhabited areas can sometimes result in increased traffic accidents and other human/wildlife conflicts. Attracting deer to your property through feeding can also attract predators, like cougars that follow deer herds. And while deer and moose are not predators, they are still wild animals and can be aggressive."

So what kind of wildlife sightings or encounters should you report?

Here is a simple breakdown of some commons scenarios that should be reported to the DWR:

Cougars can be found throughout Utah, usually in the foothill and canyon areas, but also sometimes down in the valleys — especially during the winter months when they follow deer searching for food to lower elevations. If you encounter a cougar that has killed something in a neighborhood or yard or it is exhibiting aggressive or threatening behavior, you should report it. If you capture footage of a cougar on security cameras or see one from a distance in foothill areas, you do not need to report it.

Moose are also commonly found in the foothill areas since that is their natural habitat. You should report a moose that has wandered into lower-elevation areas and is within city limits or heavily-populated areas, so the DWR can relocate the animal. If moose aren't relocated, they can stay in an area for a long time and could potentially injure someone or damage property. Urban environments, which include fences and vehicles, can be unsafe for moose. Avoid approaching moose or attempting to "herd" them out of yards or roads. Moose can be very aggressive, especially around dogs.

During the winter, Utahns may often see hawks, eagles and other birds of prey on the sides of the road. While it may seem like these animals have been injured, typically, they have gorged themselves on roadkill and are unable to fly for a period. Unless they are in the roadway and at risk of being hit by a vehicle, they have been in the same spot for over 12 hours or they have an obvious injury, these birds don't need to be reported.

The delisting of gray wolves from the Endangered Species Act is scheduled to go into effect Jan. 4. Under this nationwide delisting, wolves will be managed under a statewide management plan to guide the reestablishment of wolves in Utah. Although there are no known wolf packs in Utah currently, they do occasionally disperse into Utah. You should report any potential wolf sightings as soon as possible so the DWR can document their presence in order to guide management.

If you are ever injured during a wildlife encounter, report it immediately to the nearest DWR office.