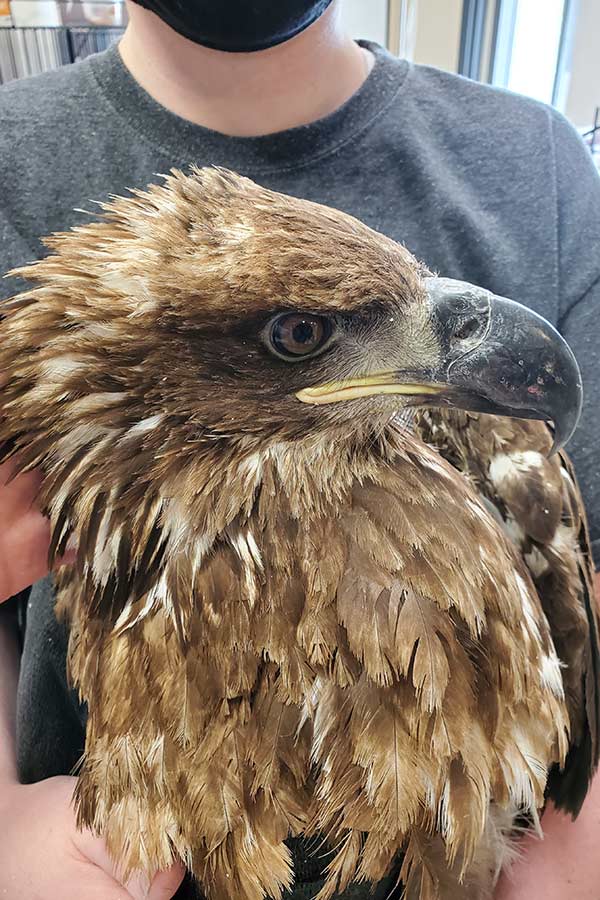 Due to clerical errors, the total monetary value of the animals illegally killed in 2020 was inaccurately stated in the initial version of this news release. This number has been updated to reflect the accurate total.

DWR conservation officers received a report of an injured juvenile bald eagle near the town of Henefer in Summit County on April 2. A Utah State Parks ranger and a Utah Highway Patrol trooper located and captured the injured bird near the Weber River, west of I-84, along the frontage road. It was then transported to the Wildlife Rehabilitation Center of Northern Utah in Ogden.

Upon further investigation, it was determined that the bald eagle had been shot by a small-caliber firearm. The bullet entered the ride side of the bird, breaking one of its wings, and the bullet was lodged in the bird's neck. The bird underwent surgery on April 9 to remove the bullet and is doing well in recovery at the center.

Officers estimate the shooting occurred two weeks before the bird was found and reported.

While bald eagles are no longer an endangered species, they are still protected by multiple federal laws. Bald and golden eagles, along with their feathers and parts, nests, nest trees, and roosts are all federally protected.

Anyone with information regarding the illegal shooting of this eagle, or any other wildlife-related crimes in Utah, is encouraged to report it to DWR conservation officers in one of the following ways:

If you have information about this specific case, you can also contact DWR Officer Jeremy Wilcox at 385-288-2112. Rewards are available, and requests for confidentiality are respected.

Every year, Utah conservation officers conduct numerous investigations into the illegal killing of wildlife. In 2020, officers confirmed over 1,000 illegally killed animals valued over $387,000.