Locating ptarmigans in the Uinta Mountains

White-tailed ptarmigans (Lagopus leucurus) were introduced into the Uinta Mountains of northern Utah in 1976 with the release of birds captured in Colorado. The initial transplant consisted of 22 paired birds released in June 1976. A second release of 35 mixed young and adults was accomplished in September of the same year. Since that time, the Division of Wildlife Resources has been studying the progress of the population to determine the success of the transplant and to gather data useful in formulating future management plans. 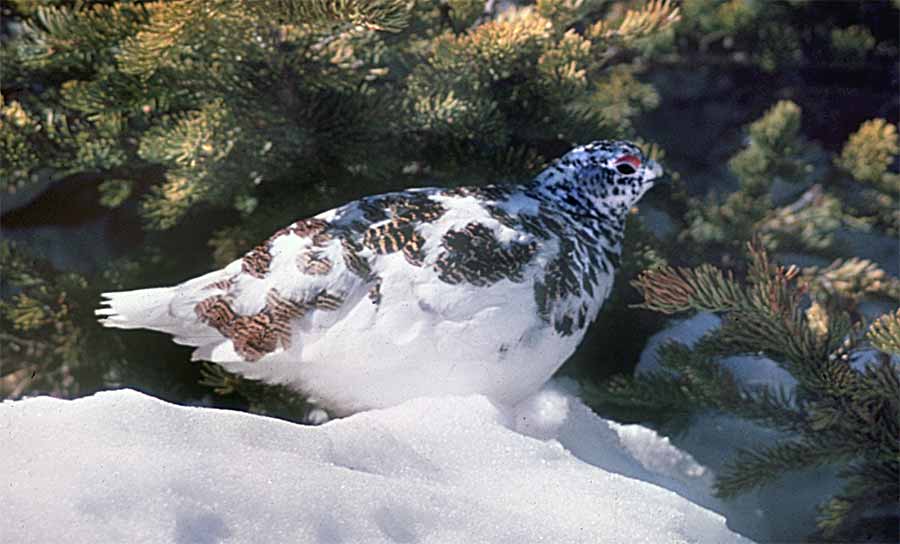 Since the initial transplant period, various agencies, organizations and individuals have expressed interest in the progress of the population and in providing input through field observations of birds. At this time, reliable sightings of ptarmigans would be highly useful in determining the extent and rate of dispersal. However, very few people in Utah have any basic knowledge of the habits of ptarmigans, or even of what they look like. For this reason, we have set down some guidelines to follow in locating these unique birds, along with a brief outline of their life history.

White-tailed ptarmigans are the smallest of the three North American species of ptarmigan, and the only one found south of Canada. It is also the smallest North American member of the Tetraonidae, or grouse family. During spring, summer and fall, the periods when ptarmigan are most likely to be observed, the birds are a mottled brown-gray coloration, with the tail and the outer wing feathers flashing conspicuously white, especially when flushed. During the winter, they are entirely white except for the beak, eyes and claws. In size, ptarmigan most closely resemble a Hungarian partridge or chukar partridge. A mature adult will attain a live weight of about 3/4 pound (average is 11.5 oz.).

Ptarmigans are unique in that they spend their entire lives in an environment so harsh that is seems incredible that they should survive. But they do, in fact, having adapted to conditions of life in the alpine tundra of our highest mountains. During the winter, ptarmigans inhabit areas where willow, their staple food, may be found. In the Uintas, these areas are most often found along stream courses and in high basins above or near timberline. Here the birds feed on tall willow that reaches above the snow, or on lower plants that have been exposed by wind action. For protection, the birds may seek shelter in rock piles, or during harsh weather may burrow under the snow.

With the onset of spring, ptarmigans move (usually upward) to their breeding territories. These are areas that bare off by early May because of exposure to wind and/or sun. Willows are, again, a critical component of these areas. Here males defend their territory from other males and form pairs with females. The territory is occupied by both until mid to late June when the female begins laying her eggs. By the time the eggs have hatched (mid to late July), the males have generally left the area to move up to summering habitat at higher elevation. Females with their broods of 3 to 6 chicks soon follow. Here they will remain, eating late-persisting green vegetation such as geum, carex and polygonum until the onset of winter storms initiates a return to the wintering areas.

The most important characteristic of ptarmigan's winter habitat is the availability of willow. Willow buds and twigs provide almost the sole food source at this time. Suitable areas are generally of two types: tall willow growth along stream courses that extends above snowpack, and shorter willows that are exposed by the action of wind. In either type, evidence of ptarmigan use may be found by searching around the protected bases of willow bushes and around the bases of nearby rocks for piles of droppings left by roosting birds. The interfaces where willow bottoms meet talus slopes are especially good areas to examine. The droppings, when located, will be reddish brown to chocolate brown, about 1.5 inches long, 1/3 inch in diameter and usually in piles of several dozen pellets. 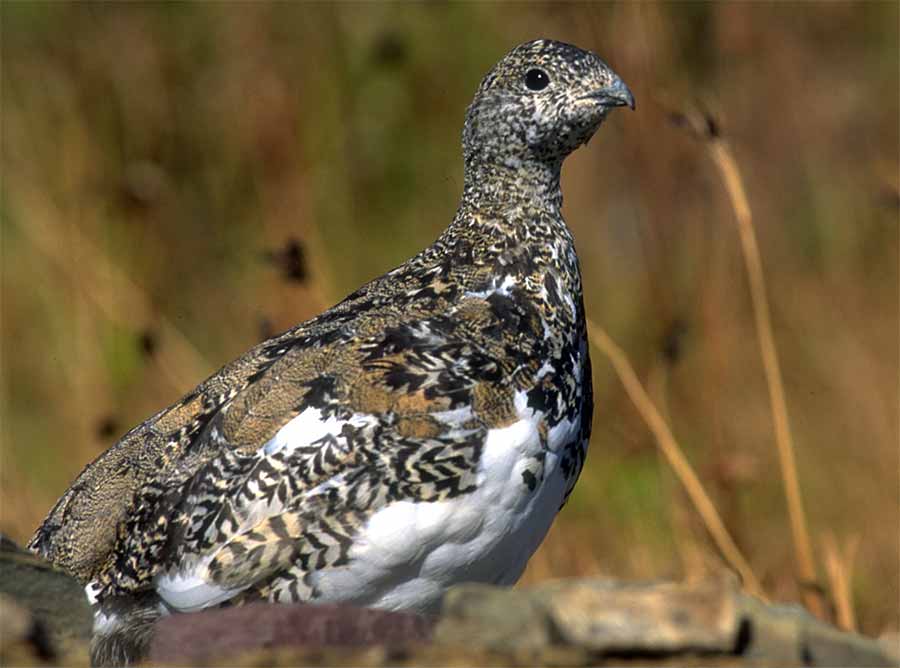 During the period from early May until late June, both males and females will be located on breeding territories. Such areas are variable, but two factors determine which areas are utilized — the specific site must be snow-free by early May, and it must be in association with willow. Such snow-free areas may be created by southerly exposures or areas which are windswept of snow. A typical breeding territory will be a bare area at the base of a talus slope, a windswept saddle or knoll, or a high bench. In all cases, the territory will be in an alpine area above timberline.

At this time, birds may be easily located by using a taped male territorial call, which in a very high percentage of cases will elicit a response from a male defending a territory. Before mid-June, females can often be observed with males. After mid-June, hens will begin laying and incubating and will not be easily located. During the time the birds are on their territories, they will also be finishing the molt of their winter plumage, and fresh white feathers will commonly be found on active territories.

A short while after a ptarmigan hen hatches her clutch of eggs, she begins moving the chicks upward toward summer brood-rearing areas. Normal hatching dates are from mid to late July. By early August, broods will have moved to summering areas. Certain specific types of areas will harbor broods, while large expanses will contain no birds. Probably the key factor in determining these areas is the persistence of green, succulent vegetation into mid-August. Typically, such vegetation is found around the heads of streams and around springs, or below a late-lying snowfield. When succulent vegetation is found along the edge of a talus slope or rock field, the area's suitability for ptarmigans is excellent. In the Uinta Mountains, typical brood-rearing areas may be found around the periphery of the very highest alpine basins, with elevations varying from about 11,200 to 13,000 feet. In all cases, the birds will be far above timberline at this time of year and will remain so until forced down by the onset of winter snows.

Original releases of white-tailed ptarmigans were made at a point about one-half mile southeast of Gunsight Pass and one mile east of Kings Peak in Painter Basin of the Uinta River drainage. The population in Painter Basin has increased to the point that birds may be at carrying capacity. Birds now may be found in Garfield Basin, Yellowstone Basin, Gilbert Basin, Atwood Basin, Beaver Basin, Rainbow Basin, and in Smith's Fork, Rock Creek, Black's Fork, Henry's Fork, and Lake Fork drainages. Ptarmigans are believed to be distributed from Deadhorse Pass on the west to Leidy Peak on the east.

Hunting for ptarmigans will be allowed as specified in the current Upland Game Guidebook. The limit is four birds. A free permit is required. Areas open include all of Daggett, Duchesne, Summit and Uintah counties.

Ptarmigans are found above timberline in moist areas. Ptarmigans should not be confused with blue grouse. They are about one-third the size of blue grouse and, as their name implies, have a white tail. During hunting seasons, ptarmigans will have begun to acquire their white winter plumage but may retain some brown and black molting on the upper surfaces of the head, back and wings. Blue grouse are much darker, especially on the underparts and have a dark, slate-colored tail with a broad, light gray terminal band.

Please do not litter. Leave your camp more clean than when you found it. Please pick up all spent shot shell casings since they persist for years and are quite obvious above timberline.