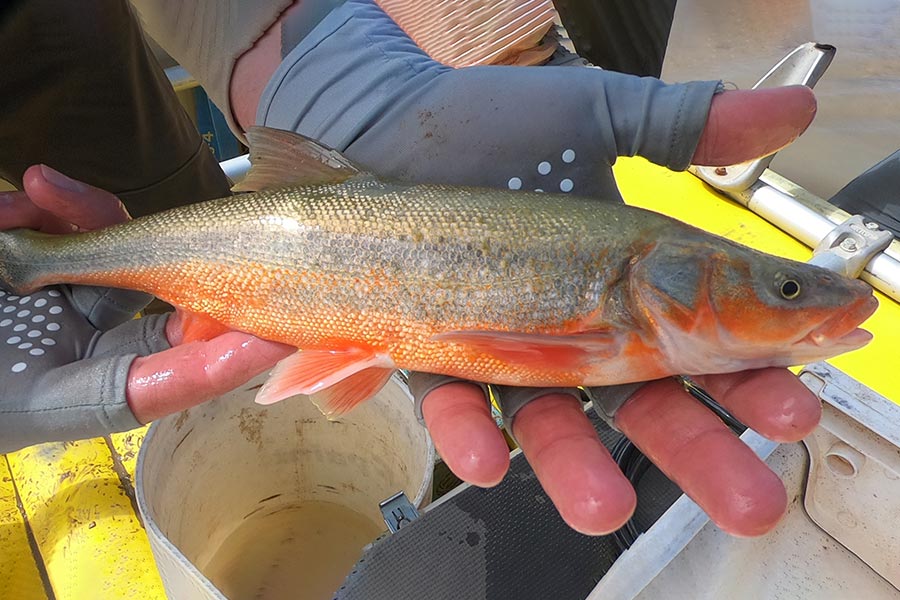 Rooting for the underdogs

It's another day on the water in the middle of nowhere, and it's perfect. The deep blue sky overhead, the swirling river against the boat's hull, and the shouts of excitement when we find another fish — they're all part of a larger quest. We've launched a new project to conserve the roundtail chub and hopefully prevent an endangered species listing.

My past led me here 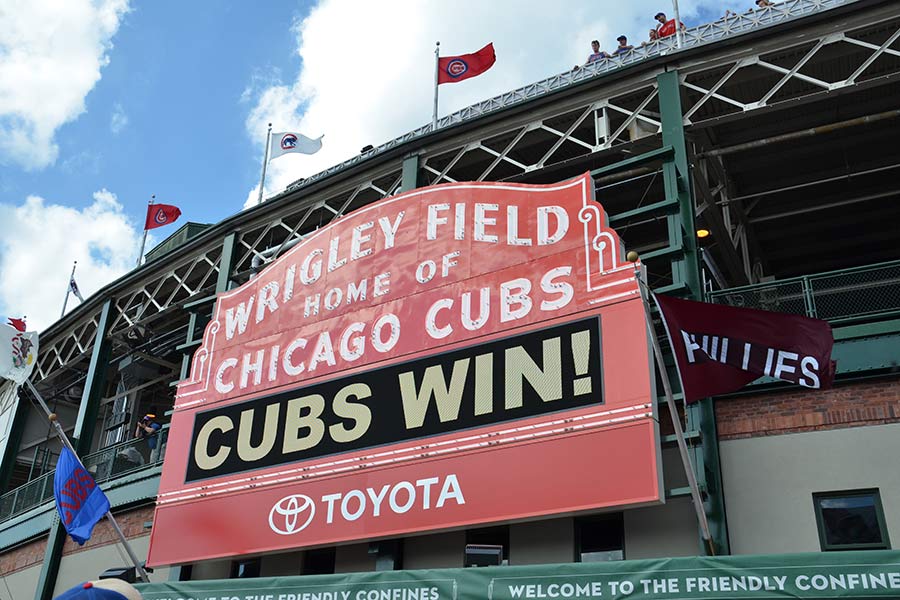 Being a Cubs fan has taught me that patience sometimes pays off for the underdog! Photo credit: smontgom65/iStock Editorial/Getty Images Plus

Being a Cubs fan has taught me that patience sometimes pays off for the underdog! Photo credit: smontgom65/iStock Editorial/Getty Images Plus

To understand why I care so much about the roundtail chub, you need to know where I come from. Growing up in Michigan, I never would have guessed I'd end up as a native fish biologist in Utah.

Many of my early activities and pastimes were naturally competitive, everything from football and baseball to fishing and cook-offs. I'm also an eternal optimist, and I waited my entire life to see the Chicago Cubs (true underdogs at the time) win the World Series — which finally happened in 2016!

I've loved fish and fishing as far back as I can remember. Some of my earliest memories are of catching bluegill with my dad and sister. I have always been very curious about how things work in the natural world, and fishing made me appreciate the outdoors even more.

All of those factors led me to college and my master's research, which focused on the mottled sculpin, a fish native to Michigan. Some people viewed this species as just another small fish in the stream — or they didn't realize it existed at all. I viewed the sculpin as an underdog in a vital ecosystem.

Even though they are one of the most abundant fish across North America, sculpin rarely get the attention that sportfish do. (A system with a healthy sculpin population indicates better water quality, and sculpin are an important food source for fish-eating trout.)

Working to protect "underdog" species became something that I wanted to do for the rest of my career. And that led me to Utah and the roundtail chub. 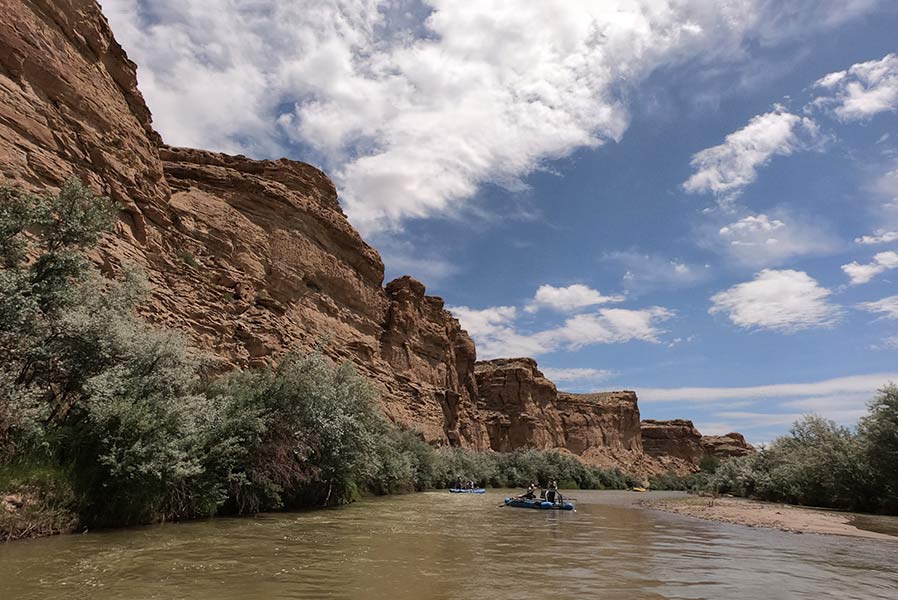 Utah's desert rivers are stunning and quite different from the forested streams of my childhood.

Utah's desert rivers are stunning and quite different from the forested streams of my childhood.

Fast forward to my 12 years here in Vernal, Utah as a native aquatics project leader for the Division of Wildlife Resources. My team works with Utah's native fish in the northeastern part of the state, and most of our projects focus on species in the Duchesne, Green, Strawberry and White rivers.

You'd think after this many years I would get tired of my job, but I still get excited every single day to try to conserve native fish. To me, protecting Utah's fish and wildlife heritage is a critical responsibility.

There are only 12 species of fish native to the entire Green River system, but that ecosystem is being threatened by non-native fish.

Over the years, uninformed and sometimes selfish people (who we call bucket biologists) have dropped more than 50 non-native species into the river system. It's not a good thing.

These illegal introductions are also partly why my job is necessary. Without ongoing efforts to study, monitor and conserve our native fish, certain species could see extreme impacts.

The roundtail chub is not a picky eater. It will feed on insects, frogs, crayfish and other fish species.

The roundtail chub is not a picky eater. It will feed on insects, frogs, crayfish and other fish species.

Of our 12 native fish species, my favorite native fish to work with here is the roundtail chub. They are very beautiful, charismatic fish. (Not enough people realize this!)

Roundtail chub are endemic to the Colorado River Basin — they are found nowhere else in the world. In Utah, they are currently listed as a sensitive species.

Their population has declined for many reasons: habitat loss from large dams, water diversions, predation from non-native species and competition with other introduced fish. These fish haven't caught much of a break since they were used as an important food source by early Utah settlers.

Huge efforts have been in play in Utah since 2006 to keep the roundtail chub from being listed under the Endangered Species Act. Unfortunately, the population is still struggling.

Getting creative to help the roundtail chub

We needed to try a different conservation approach that had a track record of success, so we began to consider our options. Hatcheries were an obvious place to start. Arizona has been incredibly successful at raising roundtail in hatcheries.

Our hatcheries in Utah are some of the finest in the Mountain West, and they are very successful at raising thousands of fish in a controlled setting. The only setback? Limitations on space. Our hatcheries are at capacity every single year, so there was not sufficient room to house these native fish for reproduction.

Luckily, we found a willing landowner — with a quiet, predator-free lake (West Green's Lake) — where we could create our first offsite brood-stock hatchery. 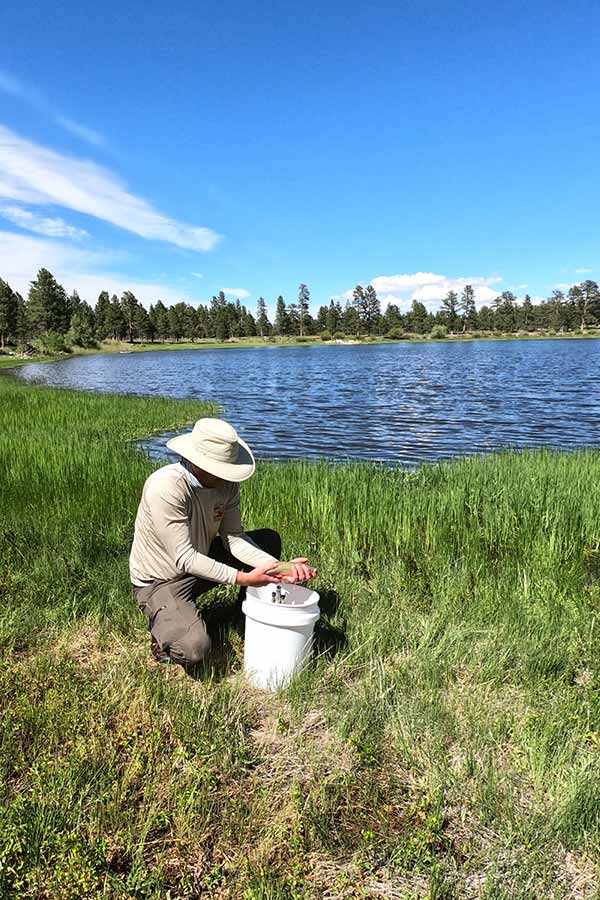 In the fall of 2019, my team and I set out on a four-day trip, spanning 50 miles of the White River. We were on the hunt for roundtail chub we could move over to the lake to begin a breeding population.

Fall is my absolute favorite time of the year to be on the river! The fall colors are breathtaking. You don't see anyone else. The weather is crisp and usually clear.

As we floated along, we used electrofishing rafts to send electrical currents into the water. Those currents would briefly stun any adult roundtail chub so we could remove it safely from the river.

We were pretty excited when our team found the first one. After collecting our data and moving the fish to its new, temporary home in the live well, we named it Ronnie the Roundtail. The first couple of fish received names, and I'm pretty sure "Ronnie" was a boy.

Overall, we ended up with four roundtails on that trip. We'd hoped to collect more than that, but it was unusually chilly last fall, and the water temperature was much colder than normal. When we arrived at the river takeout, the four fish were transported to West Green's Lake and released.

We spent the winter preparing for the 2020 field season, and I couldn't wait for spring to arrive so we could get back out on the river and do our job. Sampling native fish is the most exciting part of the year. Desert rivers are really cool ecosystems — totally different from the forested streams I grew up with in Michigan.

When we visited the river again in June, we had much more success finding fish. In all, we were able to find another 41 roundtails to add the first four fish in West Green's Lake. Our team was pretty excited!

We will be returning to the lake in the next few months to make habitat improvements and do some population sampling. We will also attempt to collect more adult fish from the river this fall and move them over to the lake. 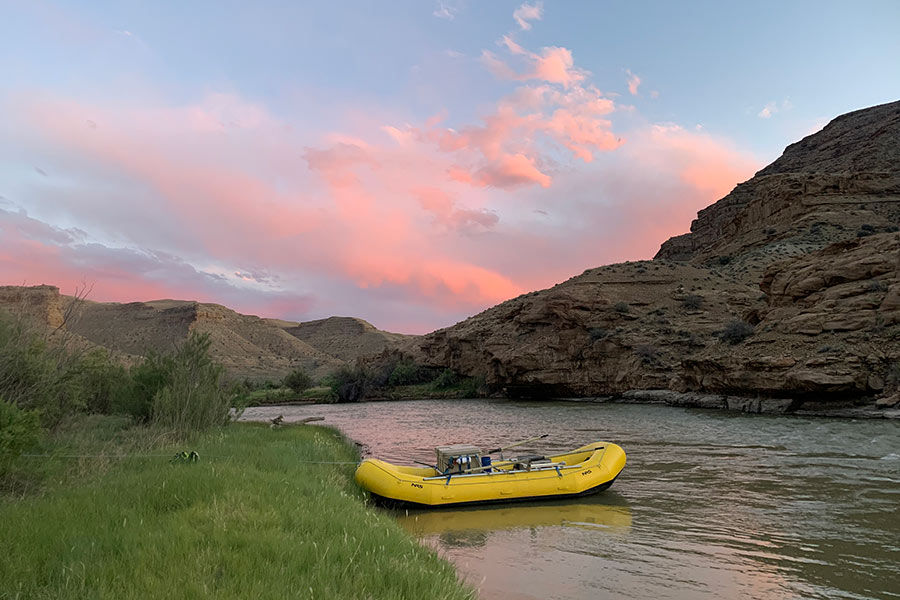 Now you see why I look forward to field season — this is a beautiful part of the state!

Now you see why I look forward to field season — this is a beautiful part of the state!

Next spring is when we may see the first successful spawning attempts, so we are already excited for that sampling trip. Our hopes are that the fish will be more successful at reproducing — and surviving to adulthood — in the lake. The offspring of those fish will eventually allow us to repopulate historic roundtail chub areas throughout northeastern Utah.

It will be a couple of years before we move any of the younger fish from the lake. The larger they grow, the better chance they will have of surviving non-native predators in our rivers.

Fighting for the underdog

For me and my team, fighting for the survival of a unique native fish is worth every minute. Somebody has to do it. Our new brood-stock lake is the first attempt of its kind to try and conserve this species and prevent it from being listed as endangered.

Once a fish is listed, your options narrow considerably, and there are many things you can't do. A future listing for this species could hinder anglers, water users and landowners.

That's where we come in as a state wildlife agency. By taking steps to conserve these fish now, before they get listed federally, we have a lot more freedom and flexibility in preventative measures.

We are committed to helping these fish and will work as hard as we can to keep their populations growing — and hopefully avoid a listing under the Endangered Species Act. 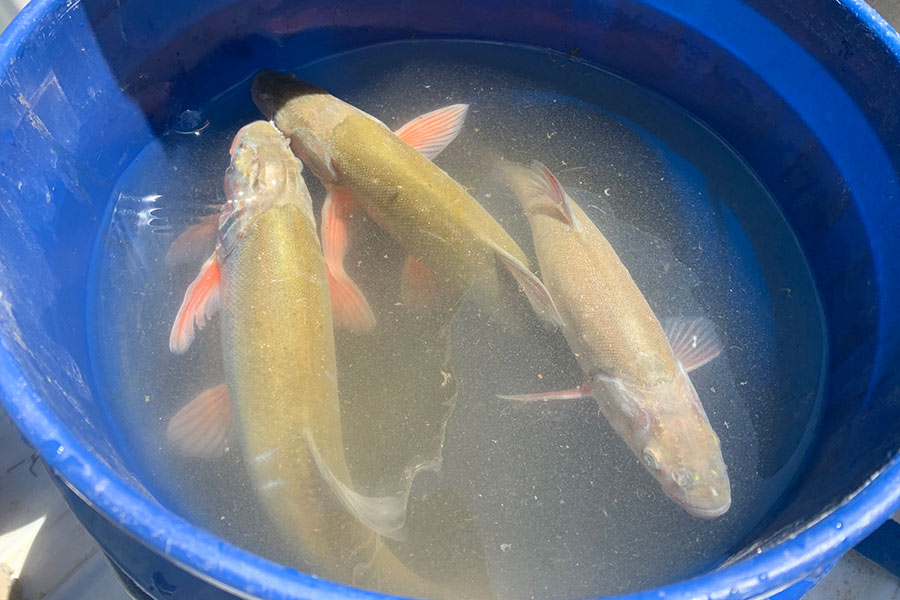 These roundtail chub were transported to West Green's Lake and will hopefully reproduce there next spring. We'll let their offspring grow for a couple of years before moving them into the rivers.

These roundtail chub were transported to West Green's Lake and will hopefully reproduce there next spring. We'll let their offspring grow for a couple of years before moving them into the rivers.

If this effort is successful, we also hope to open up this pond in the future and give anglers a unique opportunity to fish for this native species. These fish are rare, and hard to catch, making them a perfect addition to any fly angler's bucket list.

It takes patience and a lot of planning to be a native species biologist. Success isn't quick or guaranteed. But having the opportunity to make a true difference for an underdog species — to bring it back from the brink — is extraordinarily satisfying.

Stay tuned for another update after we sample the lake next spring! 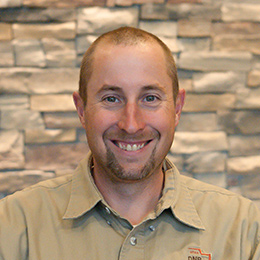 Matthew J. Breen is the Native Aquatics Project Leader for the DWR's Northeastern Region. He joined the division in 2008, after completing his master's degree in Aquatic Sciences, and now focuses on conservation and recovery of Colorado River Basin native fishes. He lives in Vernal, Utah and loves all things outdoors.