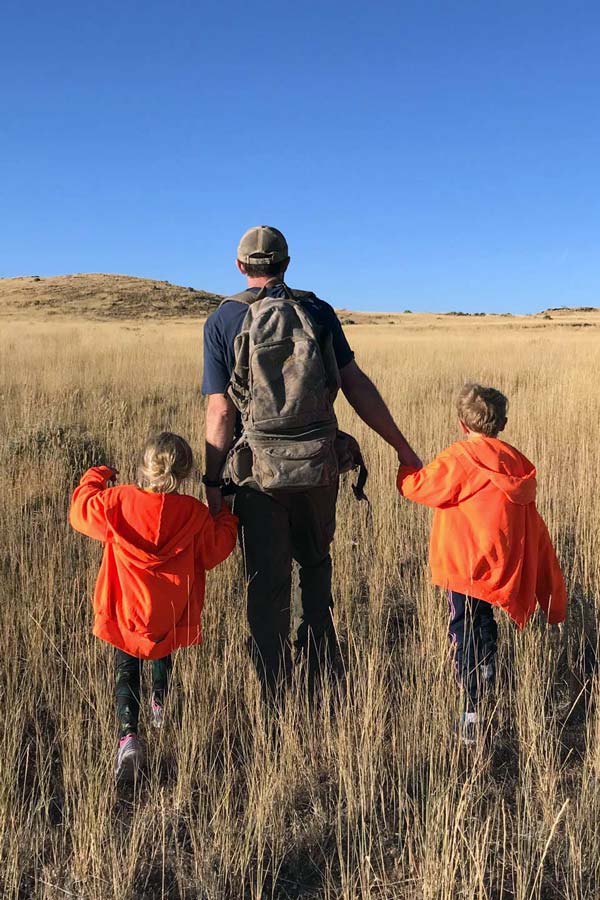 A different kind of dream hunt

When a family hunting trip stays flexible and fun

My hunting trip this fall was one I'd looked forward to for much of my adult life. But it took some unusual turns and involved a lot more water than expected — especially for a pronghorn hunt.

We had a great time scouting the day before the hunt.

We had a great time scouting the day before the hunt.

It all started a dozen years ago with a different species, in a different part of the state.

Back in 2007, I'd just started my master's project, studying greater sage grouse in Rich County. My research took me to areas full of sagebrush, where I had the chance to spot many different species. That's when I became curious about the odd-looking orange and white "deer" I was seeing all over the place.

Back then, I had a couple of elk bonus points, and my original plan was to keep applying for elk until I drew a South Cache elk tag. As time went on, though, I decided that pronghorn were a much more intriguing species than elk, so I switched to applying for pronghorn, at least for a while.

Fast forward to 2019. After years of dreaming about my ideal big game hunt, I decided it was time to finally put my bonus points toward a pronghorn permit. This year, I had four deer points, five elk points and six pronghorn points. (Diversifying my investments, right?)

I looked over the units and drawing odds and finally settled on my old stomping grounds in southern Utah, knowing that I'd easily have enough points to draw. I chose the area for several reasons:

On the road to adventure

Our journey to southern Utah began the day before the hunt opened. After a few potty breaks and purchasing no less than 10 pounds of snacks and food along the way, we finally arrived at our destination. 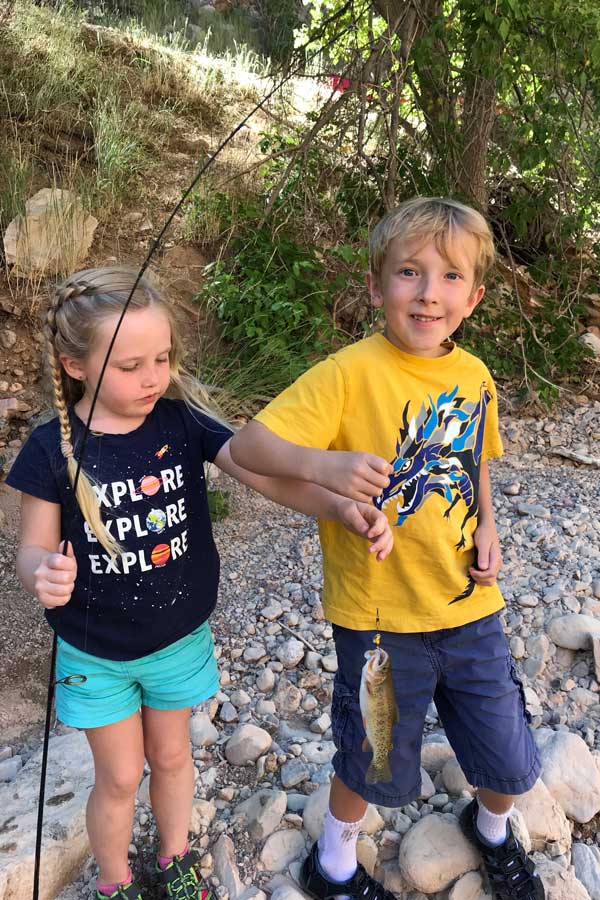 Our trip to the canyon was its own adventure. We caught trout, examined bugs and avoided rattlesnakes.

Our trip to the canyon was its own adventure. We caught trout, examined bugs and avoided rattlesnakes.

We chose to stay in a hotel because it required less packing and had an essential item for the trip — a swimming pool. I convinced my kids (barely) that we didn't need to swim immediately upon checking in, but promised them lots of time in the pool before we headed home.

Our next order of business was finding some pronghorn. We took a short drive to our unit and spotted pronghorn the second we turned off the paved road. My kids were thrilled to see these speedy creatures bounding around the desert. They were particularly amused by the bucks, tirelessly herding groups of does together while chasing off rivals. At one point, we even saw a pair of bucks sparring!

My kids were pleasantly amused by all of this — for about an hour — and then their patience wore thin. All they wanted to do was swim. After I felt satisfied with the number of bucks we'd seen, we beelined it back to the hotel so my kids could bounce between the hot tub and pool for the rest of the evening.

The day of the hunt

The following morning found us on the road to our hunting location as the eastern skyline slowly lightened from black to orange. We arrived just as the sun peeked over the mountain — not too late — but still not as early as I'd hoped. Would we be the first to arrive? Were all the pronghorn scattered by now? Would all the bucks we'd seen yesterday be harvested already?

As we neared our predetermined spot, we saw multiple vehicles and several groups of hunters already out and about. I felt an immediate surge of panic and started contemplating backup plans, wondering if my schedule could accommodate another trip the following weekend. I hid my apprehension as we started looking for bucks.

We started down a side road, heading toward a spot where we'd seen several bucks the afternoon before. It didn't take long to find one — a little guy — about 300 yards off the road. I let my kids take the first look at the buck through the binoculars, and they agreed he was a shooter. But before I could get the glasses back, he took off on a dead run and was soon out of sight. So we kept driving.

By the time we reached the end of the road, we hadn't found another pronghorn. My brain jumped to the worst-case scenario: We would head home empty-handed, and my kids would never want to hunt again.

Working together as a family

We started back the way we'd come, hoping some animals might be moving up the ridge from the hunters below us. Sure enough, just as we topped out on one of the ridges, we spotted a nice buck a couple hundred yards away. This time, I didn't hesitate — just stepped out of the vehicle and took aim. The buck was slowly trotting away from us, so I quickly got the okay to shoot from my young hunting guides. As the buck stopped to see what all the commotion was about, I drew in a breath and squeezed the trigger. 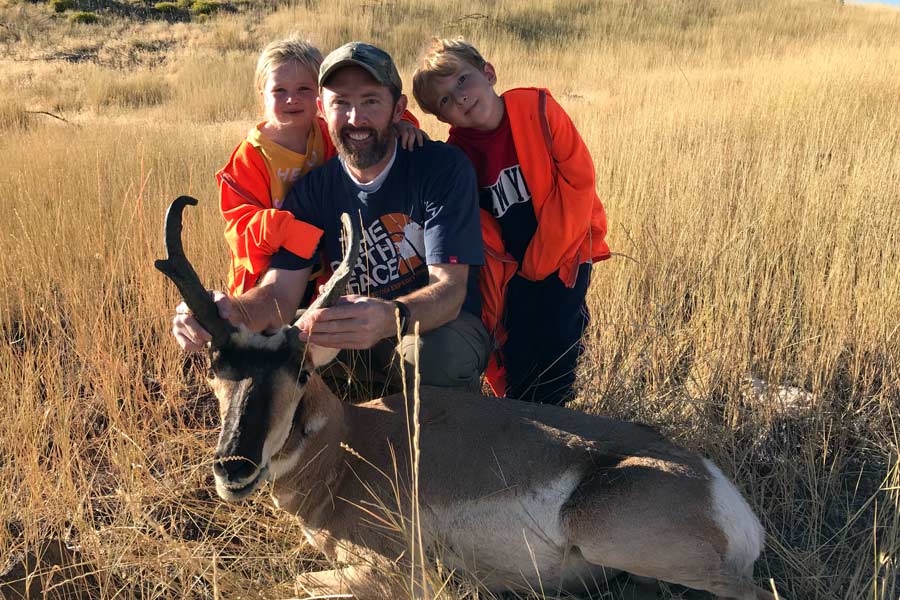 What really made this moment special was seeing my kids' excitement and curiosity.

What really made this moment special was seeing my kids' excitement and curiosity.

The shot felt good, but the buck turned and ran over a small rise. I quickly climbed the hill to where I last saw him. No blood. I took a few more steps, cresting the rise, and there he was. He hadn't gotten gone more than 20 yards.

I quickly called everyone up the hill, and we all basked in the feeling of a successful quest. A lot of planning and anticipation had led up to this moment, and it almost seemed surreal. I was grateful to have harvested such a beautiful animal, but what really made the moment special was seeing my kids' excitement and curiosity. We talked about his hooves, his horns and everything in between. After snapping some pictures, we moved to the next phase of the hunt — getting the pronghorn back to the truck!

We worked together to process the buck, and by 10 a.m., we had him in the cooler and were on our way back to civilization (defined as 5 feet of chlorinated water and an array of floating pool toys).

The perfect trip for us

After an hour or two in the pool, we headed up the canyon to find cooler temperatures and more fun. We spent a couple hours checking out bugs, collecting sticks, searching for trout and seeing how numb our feet could get in the icy water. 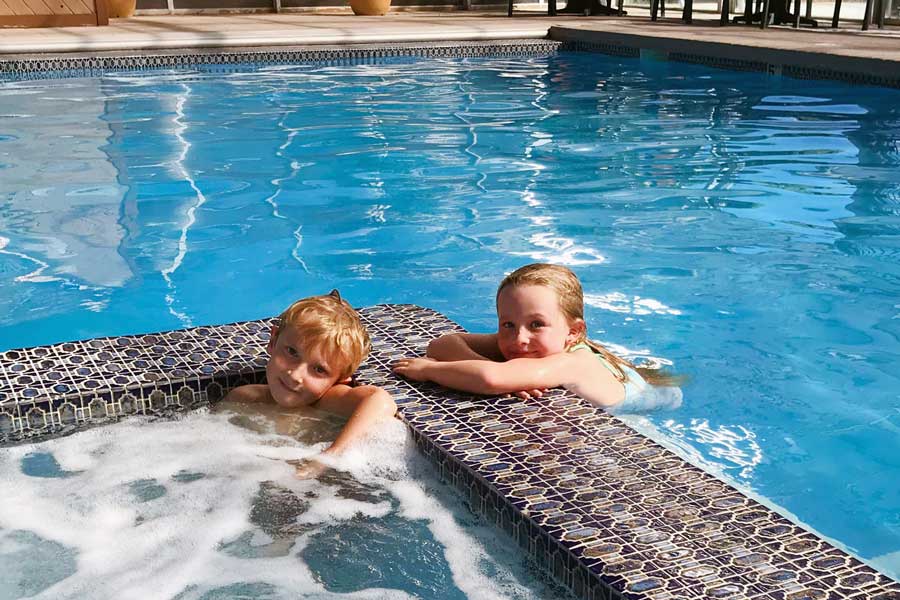 We spent three times longer in the pool than we spent hunting, but everyone had a great trip!

We spent three times longer in the pool than we spent hunting, but everyone had a great trip!

My kids both reeled in several fish from the stream — including a tiger trout and a cutthroat — which were new species for them. We also came across two rattlesnakes and a black widow spider! (Lots of excitement there, too.) With both sunlight and energy dwindling, we headed back to town for one last dip in the pool before bedtime. After that, we all settled in to watch cartoons and drift off to sleep.

This trip was wildly different from the hunt I envisioned when I began applying for pronghorn back in 2007 — but it couldn't have been a bigger success. I harvested a buck pronghorn, my family was there for the adventure and nothing went terribly wrong. We explored new locations, outwitted venomous serpents and lived on junk food for three solid days. It was perfect.

And in case you were wondering, when all was said and done, we ended up swimming three times longer than we spent hunting. But my kids were okay with that — and so was I. 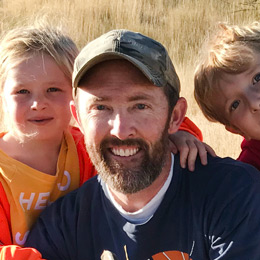 Blair is the DWR’s migratory game bird coordinator. He oversees the management of waterfowl, cranes, band-tailed pigeons and doves in Utah. In his free time, he enjoys hunting waterfowl and spending time with his family.