The best turkey hunt ever

And we haven’t even bagged a turkey...yet

When we moved to Cedar City seven years ago, I found myself working in an office full of avid turkey hunters. Their enthusiasm for the sport was so infectious, it wasn’t difficult to talk me into giving it a try. 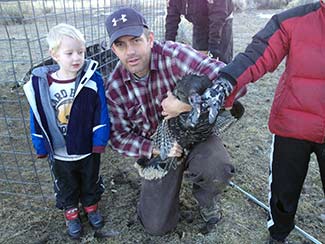 My son Miles and me with a turkey trapped for translocation in Summit, Utah.

I drew a permit on my first attempt and after a few pointers and lessons in turkey calling, I quickly bagged my first turkey. Since then, I have seen a system that required you to be lucky enough to draw a tag morph into a system with general over-the-counter tags available. I’ve been able to hunt turkeys in Utah every year. I really enjoy getting out during the general hunt. The roads are clear, the birds are gobbling and there are plenty of good spots to find them.

In the time that has passed since that first hunt, I’ve shared my love of turkey hunting with many. I have watched my childhood best friend and cousin become a very successful turkey hunter. I have seen my dad get his first turkey. I’ve helped neighbors on their turkey hunts, and even helped a young man in my scout troop bag his first turkey. I have also been able to tag a turkey most years since I began hunting.

So one might ask why this year’s turkey hunt would be considered the best one ever. The answer is simple: this is the first year my two oldest boys have joined me on the hunt. It’s like a whole new sport to me now.

Weston and Isaac’s turkey experience started early this year when I was invited to help trap nuisance urban turkeys near our home. My sons joined me in pulling turkeys from the trap, boxing them up and moving them to remote locations. This hands-on experience gave them a close look at the birds they knew they would soon be hunting. 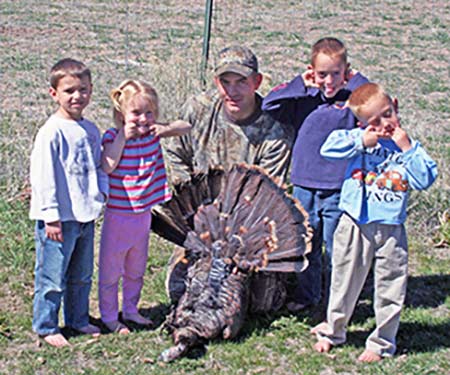 Me and future turkey hunters Weston, Isaac, Hunter (cousin), and Andrea Bezzant with a turkey I harvested on the Pine Valley Mountains.

Fast forward to the day before the general youth hunt began. We scouted an area and found several gobblers vocal on the roost. We quickly backed out, knowing this would be a great spot to be the next morning.

Weston got to go first. We snuck into the area to set up while it was still dark. As it began to get light out, I expected the turkeys to start talking at any minute, but they never did. After about an hour, we decided to check the roost area a little closer. To our chagrin, we found a new set of 4-wheeler tracks running up the bottom of the draw. The turkeys must have been spooked out of the area before they went to roost.

We made a quick change of plans and decided to make our way slowly out of the area, stopping to call every hundred yards or so. As we neared the bottom of the drainage, I let out another yelp-yelp and almost immediately got a gobble-gobble response.

I looked over at Weston and with an ear-to-ear grin he said, “They really do say gobble-gobble!” We set up and worked the turkey for about a half hour and nearly got him in there, but he ultimately decided to walk away, giving us only one quick glance at his big, red head.

After a few more trips and a couple more close calls, Isaac had a really fun experience. We decided to try a new tactic and intercept the turkeys as they went to roost in the evening. We set up in what we believed would be their path to the roost. After about 45 minutes we moved one ridge over and almost immediately spotted some hens coming up the draw. They fed by and we stalked in closer, hoping a tom would follow. 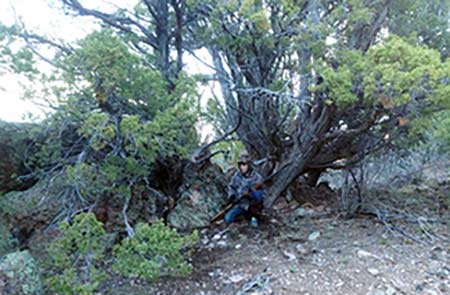 My son, scoping out the gobblers during the general turkey hunt.

All of the sudden we found ourselves surround by turkeys! As a couple of hens ran off, we heard the thunderous GOBBLE-GOBBLE of the tom wondering why the hens were leaving him. We watched as he strutted by just out of range and fed up over the hill. We quietly slipped out and set up in this draw again the next time out. As we topped a hill slipping out of there, we were surprised to find the turkeys had doubled back and now were right in front of us. There was the tom, front and center, within range.

I told Isaac to shoot him. It only took a moment for the BOOM! to follow. A clean miss, but a first opportunity. Isaac said that his body wouldn’t stop shaking. He felt the thrill of turkey fever (a close relative to buck fever)!

We still haven’t bagged a turkey this season, but we’ve truly enjoyed the thrills associated with the chase. With the general season lasting until the end of the month, we have a few more opportunities to git’r’done. We plan to take all the chances we can get. Who knows? Maybe tonight is the night!

Gary is the Habitat Program Manager for DWR's Southern Region. He oversees the Wildlife Management Areas and Habitat Restoration program and works closely with federal agencies to ensure their actions are in the best interest of wildlife. He has a wife and six children.