There's gold in the Uintas!

One of my passions is fly fishing for all western trout species. If you ask my wife Debbi, she would likely call it an obsession. Anyway, I prefer to call it a passion. Along with the native cutthroat trout in the west, I love fishing for golden trout. I have made several trips to the Wind River Mountains in Wyoming and even to the Sierra Nevada Mountains in California to catch golden trout. 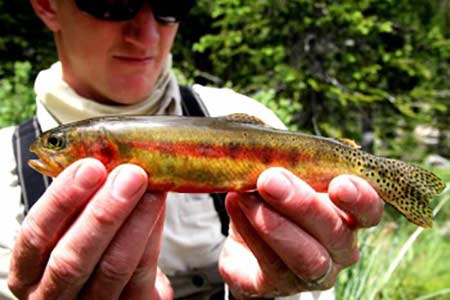 A closeup of a golden trout caught at Echo Lake on July 10.

A closeup of a golden trout caught at Echo Lake on July 10.

Well, I couldn't be more pleased (and I'm sure Debbi is as well) that now I don't even have to leave Utah in order to catch this gorgeous trout.

Golden trout are native to the southern Sierra Nevada Mountains of California and they are California's state fish. Because this trout is so beautiful, golden trout have been stocked into high-mountain lakes throughout most of the western states to provide anglers a variety in their catch.

The Utah Division of Wildlife Resources (Division) has been managing golden trout in Utah since the 1920s and several lakes in the Uinta Mountains boasted good populations into the 1950s. Golden trout did not evolve with other trout species, and consequently, they don't do well with other trout.

During the 1950s in Utah, brook trout either invaded or were stocked on top of golden trout and we lost many of our populations. The Division stocked more lakes with golden trout in the 1960s and 1970s, but these populations met the same fate with the invasion of other trout.

By 2012, there were only a few locations where golden trout were able to hang on, but populations were so low that only the most fortunate anglers encountered them. 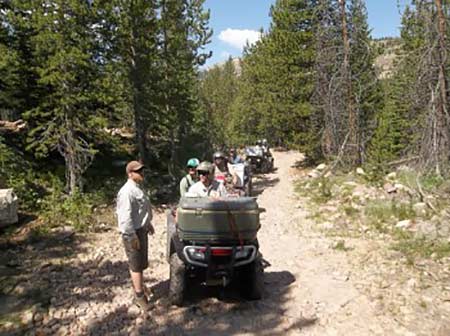 Because the road to Echo Lake is so long and bumpy, we used four-wheelers and coolers to stock the golden trout.

Because the road to Echo Lake is so long and bumpy, we used four-wheelers and coolers to stock the golden trout.

Recently, the DWR has worked with the Wyoming Game and Fish Department to obtain golden trout eggs and beginning in 2012, we have been able to stock golden trout into the two Uinta Mountain locations where small populations have persisted:

Echo Lake can be accessed by a rough 4-wheel-drive road (United Forest Service Road 027 and then take the left Y on road 137) from the Mirror Lake Highway about three or four miles before you get to Trial and Washington Lakes, if you are coming from the Kamas side.

For more information on the golden trout populations in the Atwood Creek Drainage, call our Northeastern Regional Office at 435-781-9453 and ask to speak with a biologist.

Recently, my nephew Ethan was visiting from Illinois and I wanted to take him into the Uinta Mountains to experience the beauty that Utah has to offer, and hopefully catch his first trout. Since I've lived in Utah for close to 20 years and have never caught a golden trout here, Echo Lake seemed like the place to take him. 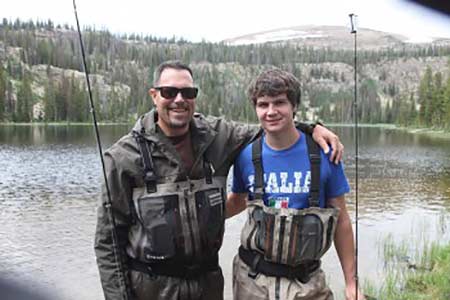 Paul and his nephew Ethan during their latest golden trout fishing trip.

Paul and his nephew Ethan during their latest golden trout fishing trip.

Surprisingly, four of my Division coworkers had interest in trying for their first golden trout. (Alright, maybe that's not too surprising.) Including my nephew, the six of us headed up to Echo Lake on July 10.

I had only been to Echo Lake a couple of times (prior to the recent stocking of golden trout) and the road was everything that I remembered. I would caution that this road at a minimum requires a vehicle with clearance and I would recommend 4-wheel drive (or ATVs).

We arrived at Echo Lake around 11:00 a.m. and I set my nephew up with a fly (#14 caddis) and bubble. Before I had even put my fly rod together, he had lost a brook trout. I fished from a float tube and one guy even brought a kayak. As the day progressed, it didn't seem to matter if you were fishing from a tube/kayak or from the shore, everyone was catching several golden trout and brook trout.

As it turned out, Ethan's first trout was a golden trout! All the fish in Echo Lake were willing and we caught them on dry flies and streamers. There was really no need to use anything but a #14-#12 caddis, but I tried a few different flies and caught fish on everything.

While the fish we caught were not large, they were a good fight on a 3-wt fly rod. Just catching golden trout was enough for all of us. I probably landed around 25 golden trout up to nine inches and 15 brook trout up to about 10.5 inches by the time we left at 3:00 p.m. Ethan landed seven or eight trout (several of them golden trout). 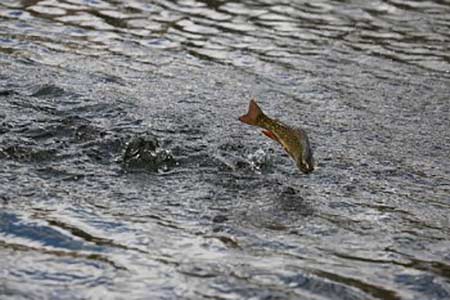 A beautiful brook trout taking a fly at Echo Lake.

A beautiful brook trout taking a fly at Echo Lake.

I did notice, at least that day, that I would catch more brook trout near shore and more golden trout about 20-40 feet off shore, but like I mentioned, even the shore anglers had no problem catching golden trout. The state catch-and-keep record golden trout is 14.5 inches (14 oz) from Atwood Creek in 1977 and the catch-and-release record is from Echo Lake in 2008 at 11 1/8 inches. We didn't break any records, but give these fish a few more years and I feel that there could be some new golden trout state records!

While I can't guarantee that you will catch golden trout if you decide to make a trip to Echo Lake, if you put some time in, your chances of landing some is very good. Don't forget the regulations in the Uinta Mountains, including Echo Lake: statewide trout limit of four fish with the option for a bonus four brook trout.

Paul Thompson is DWR's Northern Region Aquatics Program Manager. He coordinates all aquatics-related programs and projects in Northern Utah. Paul enjoys the diversity his job offers. He works on everything from native species, to sportfish.