Are you catching and releasing properly?

It's been close to 30 years since I took on my first educational campaign as a new Regional Outreach Manager for the DWR. The day after I moved into an apartment in Vernal, I took a walk along the Green River below Flaming Gorge Dam. What was supposed to be an "ooh aah" moment based on the Green's growing reputation, became a "what's going on here?" moment instead. 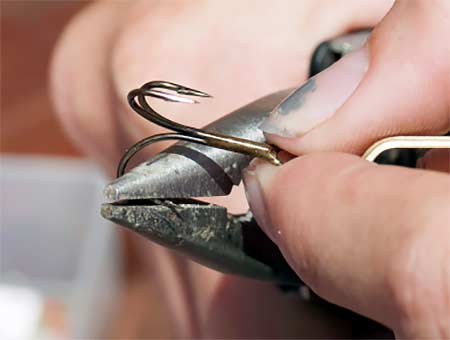 If you don't have barbless hooks, flattening the barbs on the hooks you do have will make it easier for you to remove the hook from a fish's mouth.

If you don't have barbless hooks, flattening the barbs on the hooks you do have will make it easier for you to remove the hook from a fish's mouth.

During my hike, I saw the Red Cliffs' green hillsides covered with flowers, the clear river water and an abundance of trout, all of which I greatly appreciated.

Then I saw dead fish on the bottom in almost every pool.

Early the following week, I met Steve Brayton, project leader for the Green River and Flaming Gorge. Steve gave me a tour of the area and we talked about the dead fish problem and how we could introduce angers to proper catch-and-release fishing.

The concept was new to Utah and most other states, and the research was just starting to come in. After reviewing what was available, I decided to start from the beginning and keep things simple.

The campaign consisted of a series of news articles and invites to the press paired with a brochure and video. "What is 'Catch and Release' fishing?" It started with the question, covered six basic steps and included a special note:

Special note: Most fish will swim away, even if they were mishandled. This may be rewarding to the angler, but a fish that dies a day or a week later is of little value to the resource. Only proper catch-and-release techniques can assure that there will be fish available for future fishermen on Utah's catch-and-release waters.

The campaign explained barbless hooks, dangers of lactic acid and other chemical buildups produced by handling stress, and the value of a fish's disease-protective slimy coating. 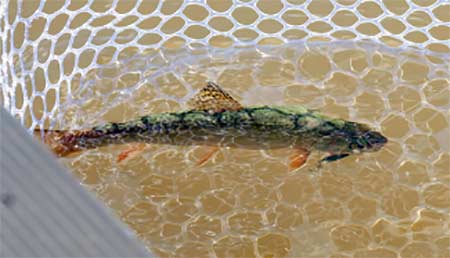 If you plan on catching and releasing fish, nets made of silicone or rubber are the best nets to use.

If you plan on catching and releasing fish, nets made of silicone or rubber are the best nets to use.

We passed out copies of the brochure to everyone who fished the Green. It was also available at visitor centers and offices. The video was set up in the Visitors Center at the dam. Scouts and other civic groups were given presentations and copies of the brochure and video. Within a couple of years, materials from our campaign had spread to other waters, and even other states.

The response was impressive. The dead fish on the bottom of the river all but disappeared. They weren't completely gone, but it was now well within acceptable limits.

Unfortunately, dead fish numbers have crept up again. Biologists have let me know that we're having problems at some of our state's valued Blue Ribbon fisheries, including the Green River, Calder, Brough and Lake Canyon Lake.

Today, most anglers know what catch-and-release fishing is. But even the most knowledgeable anglers could use a reminder — especially on steps two and three: bring the fish in quickly and keep it in the water.

A number of years ago, "tight lines" were replaced with "light lines." Technological advances presented anglers with a collection of lighter weight poles and lines, which made casting easier and fighting the fish more exciting. Part of the fishing challenge shifted to trying to finesse the fish in, so you don't break your line.

Some anglers are fighting their fish to exhaustion because their selection of poles and lines are too light. This is especially true in rivers and from boats, as anglers are not only fighting a fish, they are fighting the strength of the river or the speed of the boat.

Survival rates drop dramatically when fish are played for longer periods of time because of stress, oxygen deprivation, and lactic acid and other chemicals build up in the muscles. 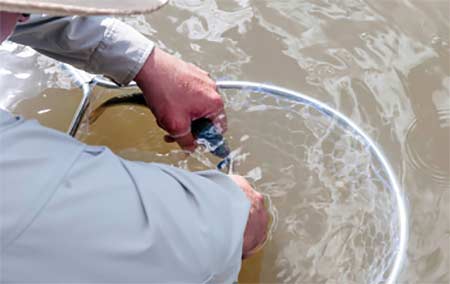 This angler is releasing fish the right way: his hands are wet, he's keeping the fish's gill under the water and he's using a pair of long-nosed pliers to remove the hook. He also landed the fish using a modern net.

This angler is releasing fish the right way: his hands are wet, he's keeping the fish's gill under the water and he's using a pair of long-nosed pliers to remove the hook. He also landed the fish using a modern net.

We've also noticed some anglers taking their time getting the hooks out, keeping the fish's head above water, because the fish isn't fighting. Fish breathe through their gills. Bringing its head up can collapse the capillaries in the gills.

Moving the fish back and forth in the water to pass water through the gills saves a few, but it's still not as effective as you may think. Research shows fish played for longer periods often take up to 10 days before dying of a catch and release.

Newer research has shown an additional factor: water and air temperatures play a big part in fish survival. Fish, especially cold-water fish like trout, are more likely to die when they are caught and brought up into warm summer waters. Also, the warmer air temperatures stress the gills more when their heads are brought above the surface.

The solution is to fish during the cooler hours of the day and to practice proper techniques, especially bringing it in quickly and keeping its gills underwater.

When proper techniques are followed, catch and release works! I'm optimistic that I'll wrap up my career with another success story.

Fish survival is all about equipment and technique.

Ron is the DWR's conservation outreach manager in the Northeastern Region. From wrestling bighorn sheep to banding ospreys, he loves the chance to be part of wildlife projects around the state. In his free time he enjoys traveling and wildlife photography.