Restoring a historic dam for anglers and farmers

Exciting things are on the horizon for Red Creek Reservoir.

Red Creek Reservoir is located seven miles north of Fruitland in Duchesne County, Utah. In the late 1950s, the Duchesne County Water Users Association decided to create a reservoir on Red Creek for irrigation and recreation. The anticipated benefits: farmers in the area needed the water for irrigation, and there was a need for a good fishery for anglers and other recreationists.

In 1960 the local irrigation company and Utah State Fish and Game Department (the old name for Division of Wildlife Resources) pooled finances and built a large earth-filled dam on Red Creek on private land. It was to be a marvel of fishing opportunity and stored water for irrigation in that high desert. 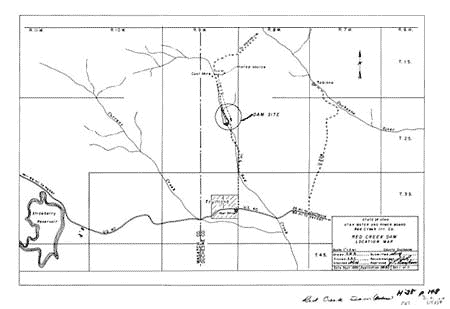 Articles in 1959 in the local paper, the Uintah Basin Standard, hailed the project as the largest state reclamation project thus far in Utah:

"Although dwarfed by federal reclamation projects, the Red Creek dam is the largest to which state credit has been allowed. Total estimated cost is $430,000 ($13.8 million in 2013 dollars) including about $26,000 ($208,000 in 2013 dollars) to be raised by the farmers who will be benefited directly by the supplemental water the dam will furnish. The reservoir will serve another purpose; it will become another public fishing spot. State Fish and Game Commission has pledged $14,000 ($252,000 in 2013 dollars) to the company for construction of the dam in exchange for perpetual right of public entry to the reservoir." (Uintah Basin Standard, July 23, 1959)

In January of the following year, the paper reported that the engineers were pleased with the design of the dam:

"Hydraulic engineers at Utah State University are certain the spillway on the new Red Creek earth fill dam in Duchesne County, will operate precisely as designed measurements of water velocities, pressures, scour and other factors affecting adequacy of the new spillway, were taken on a scale model of the spillway chute and 'stilling" basin now operating in USU engineering laboratories .[I]t is now possible to design completely on the drawing boards, the different types of spillway structure over which flow conditions can be predicted " (Uintah Basin Standard, January 21, 1960). 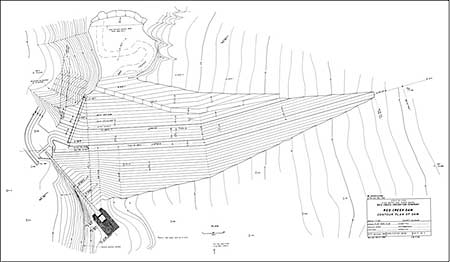 Figure 2. Engineering drawing from the original dam plans showing an overhead view of the dam and the spillway at the left. The reservoir would fill in the upper part of the diagram.

Figure 2. Engineering drawing from the original dam plans showing an overhead view of the dam and the spillway at the left. The reservoir would fill in the upper part of the diagram.

Toward the end of that year, the dam was nearly completed:

"The Red Creek Dam is expected to be completed by Oct. 20, [1960] . this dam which will impound the waters of Red Creek in west Duchesne County, to create a 140-142 acre irrigation-recreation reservoir which will store some 5,800-6,000 acre feet of water. The project, expected to cost nearly $325,000 [$10.4 million in 2013 dollars] , takes about 170 acres of grazing land for the reservoir and dam. No homes had to be moved for the dam, and just a little over a mile of irrigation ditch .needed to be relocated. This reservoir will furnish supplementary water for irrigation of some 3,500 acres of cultivated land and irrigated pastureland Construction of this dam culminates more than eight years of planning and work for these Fruitland people and it is their 'dream come true.' Increased production of crops on this land is expected to boost Duchesne County's economy materially." (Uintah Basin Standard, October 6, 1960).

Much to the dismay of the local residents and the Game department, the completed dam promptly began to leak. By 1962, water was seeping around and under the dam through gravel layers. Later, the earth fill surrounding the spillway began to leak. Since then, many attempts at patching the leaks have been made:

"Excavation work is to be started soon in another attempt to stop the seepage at the base of the new Red Creek Dam .part of the seepage was controlled this past May by installing two lengths of perforated pipe in the fill dirt of the base of the dam, and draining these pipes into the spillway. Red Creek Irrigation Co. released substantial amount of the stored water to reduce the pressure and cut down the seepage This curtailed the planting of grains, other crops and pasture improvement materially, cutting deeply into the economy of this area and the entire Duchesne County. " (Uintah Basin Standard, September 27, 1962). 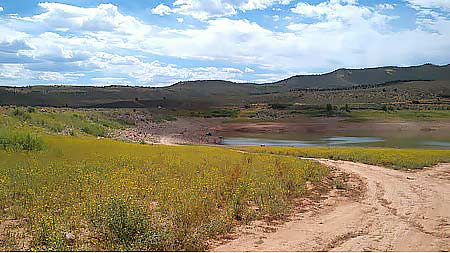 Red Creek Reservoir at the current, very low storage level, viewed from the east looking towards the dam on the left.

Red Creek Reservoir at the current, very low storage level, viewed from the east looking towards the dam on the left.

The Utah State Engineer has been charged with regulating non-federal dams since 1919. In the late 1970s, Utah started a Dam Safety Section within the State Engineer's Office, which inspects and oversees dams. The Dam Safety Board has put a classification of "high hazard" on Red Creek Dam, due to the risk to life and property should the dam suffer a catastrophic failure, such as might occur during an earthquake. Dam Safety has ordered the irrigation company to lower the reservoir level until certain major repairs are made, including replacing the spillway, which has been condemned, and seismic retrofits.

In recent years, the reservoir has been held at a very low level, less than half the capacity, partly due to the dam impairment, and partly due to lower precipitation. According to Nathan Robinson, President of Red Creek Irrigation Company, there are more than 101 share owners in the irrigation company, with irrigation water going to 46 farms, 21 residential yards, and seven livestock pastures in the irrigation district, comprising 2,200 acres.

These shareholders have only been able to irrigate half of their fields, and the fields they do irrigate are given a reduced amount of water and as a result are less productive, producing, for example, one alfalfa cutting rather than two or more. The cumulative effect of this will be loss of some of their alfalfa fields to weeds, and a consequent loss of economic value.

Now, finally, in 2014, the dam is due for a major overhaul. Red Creek Irrigation Company, the Division of Water Resources, the Division of Wildlife Resources, and its federal partner, the U.S. Fish and Wildlife Service, are teaming up to rebuild parts of the earthworks, create a new spillway, move a portion of the road to divert traffic around the new spillway, and bring the dam up to current seismic standards.

Costs of the upgrades are expected to total approximately $3,000,000, provided by loans and grants from the Utah Board of Water Resources Dam Safety and Revolving Construction Fund, and by grants from the U.S. Fish and Wildlife Service, Wildlife and Sport Fish Restoration funds. The loan will be paid back by fees levied on the members of the irrigation company. At the successful completion of this work, the reservoir level will be returned to its historic level, irrigation supply will be restored, and the public fishery and angling opportunities will be restored.

How is the fishing at Red Creek Reservoir? Trina Hedrick, Division of Wildlife Resources (DWR) Northeastern Region Aquatics Manager, says that the basic fishery management program is to stock rainbows and tiger trout as fingerlings and let them grow to a catchable size. DWR stocks 12,000 rainbow trout and 5,000 tiger trout every year into Red Creek Reservoir. The rainbows are stocked in mid-June and the tigers in early July. 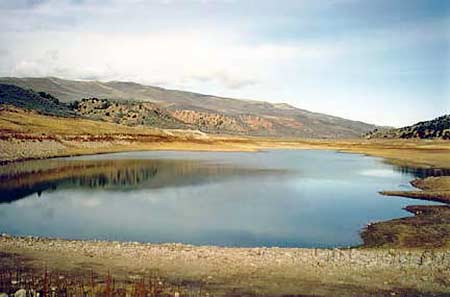 Red Creek Reservoir can actually yield some pretty impressive growth, and the condition of the fish has been good. The average length of net-captured fish in 2012 was a bit over 13", and the maximum length was just over 19". Wildlife Resources staff expect to see big fish in Red Creek Reservoir in the future as a result.

As for native wildlife species in the vicinity, Brian Maxfield, Sensitive Species Biologist at DWR, says there have been sightings of roosting bald eagles in years past, but not recently. Greater sage grouse have been observed west of the reservoir on occasion. Red Creek Reservoir is encompassed on the east by Tabby Mountain Wildlife Management Area, which is an important mule deer and elk winter range.

When the planned repairs and upgrades to the dam and spillway are complete, not only will farmers in the Fruitland community have their full irrigation flows again, but Red Creek Reservoir will once again become a destination for anglers and boaters, and a scenic backdrop for occasional migratory birds hunting along the shores.

Therese Meyer has been with DWR for over ten years. She works in the Habitat Section focusing on land and water asset management. On vacations she enjoys looking at native plants ("botanizing"), sailing, river rafting, and traveling to new places.