White-nose syndrome: a disease of bats 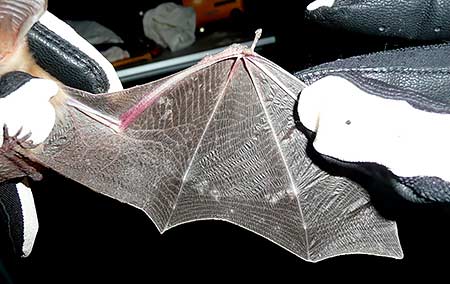 A DWR biologist examines a bat wing for possible damage related to WNS.

A DWR biologist examines a bat wing for possible damage related to WNS.

Strange things began to happen in caves in New York State late in the winter of 2007. Scientists found bats clustered near cave mouths, flying around the snow-covered landscape during daylight, and lying dead within caves and outside on the snow in large numbers.

As of September 2014, 5.7 million bats were estimated to have died in 27 states and 5 Canadian Provinces from a devastating new disease. For a week I had the opportunity to learn more about this disease of bats (people can't get it), how it has impacted other states, and how it might impact Utah when it reaches the western United States.

My attendance at the White-nose Syndrome (WNS) Workshop in St. Louis, Mo. was supported by DWR and the US Fish and Wildlife Service.

Bats are interesting and largely beneficial animals that provide important "ecosystem services." That is a fancy way of saying they eat lots of harmful bugs for free. They can eat half of their weight in forest and crop pests every night. DWR is responsible for managing Utah's bats, and 6 species merit management priority in our Wildlife Action Plan. DWR does have a plan in place for Management and Surveillance of WNS, but as I learned, there has been a steep learning curve for scientists and state agencies as they deal with this problem. 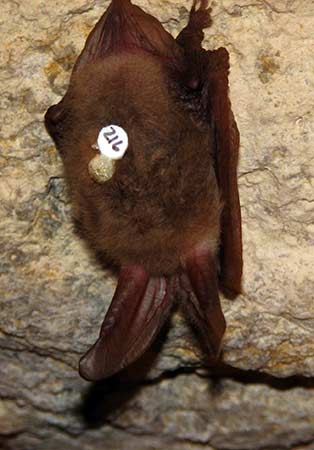 A Townsend's big-eared bat hibernating in a mine in Box Elder County. This species probably will suffer only minor impacts from WNS.

A Townsend's big-eared bat hibernating in a mine in Box Elder County. This species probably will suffer only minor impacts from WNS.

WNS is caused by a fungus that is not native to North America. A white fuzz seen on the nose of hibernating bats when infected gives the disease its name. Humans probably were responsible for transporting the disease from Europe to the US and could play a role in dispersing it more widely throughout the US. That is why visitors to Timpanogos Cave may be asked to decontaminate their shoes before entering the cave.

Other agencies responsible for caves and mines may take similar steps if the disease, which is currently as far west as Kansas City moves into Colorado and Utah. DWR's biologists are actively searching for bat hibernacula in Utah, but to date the number of individual bats found in any one spot is much smaller than the eastern states. We have some hope that because our hibernating bats are widely scattered in cracks, caves, and mines rather than concentrated in huge numbers in caves as in the East, WNS will have a reduced impact here. Proper conditions for the growth and maintenance of the fungus do occur here, so only time will tell how our state is affected.

Not all bat species are as severely affected as the little brown bat (99% mortality in some populations). Townsend's big-eared bat, Utah's most commonly found hibernating bat, probably will be resistant to the disease because its close relatives in the east have not been dying when in contract with the fungus. 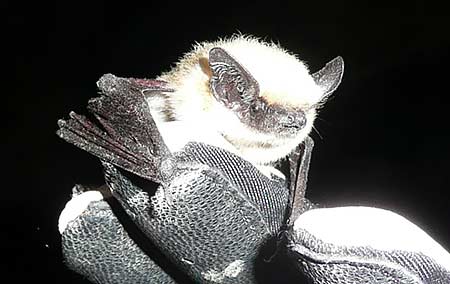 The Canyon Bat is one Utah species that could be susceptible to WNS.

The Canyon Bat is one Utah species that could be susceptible to WNS.

However, all our bat species face challenges including loss of habitat, pesticide exposure, and mortality from wind turbines. Wind energy development poses a serious hazard for bats. Technical fixes and adjustments in turbine operation will hopefully mitigate this threat in time, but this will only happen if the public supports putting time and effort into making that happen.

Many people and organizations worldwide are working to fight WNS, and they are making progress on many fronts. The US Fish and Wildlife Service has just announced grants of $1.3 million going to 30 states, including Utah, to fight WNS. But much irreversible damage has already been done. One good place to learn more about the disease and how you can help bats is the Bat Conservation International website.