Be careful with that freshly harvested deer

Author's note: These methods are probably not news to folks who are fortunate enough to have been taught the techniques of proper game meat preparation, but I thought it would be a nice contribution for folks to consider as they head out on the upcoming deer and elk hunts this fall.

There's an old joke told at game-checking stations every year about how to make deer meat taste like beef. It goes something like this: If you kill a prime grain-fed steer, gut it and drag it back to camp behind a four-wheeler, leave it laying out in the dirt and sun for a couple days for your buddies to admire, and then take it down to the butcher shop for processing, when you get it back, it will taste a lot like deer meat! 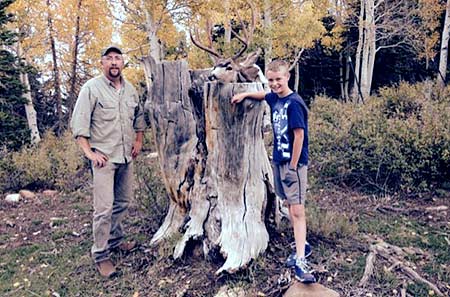 David and Justin Lee with a 2014 muzzleloader buck.

David and Justin Lee with a 2014 muzzleloader buck.

It's hard to imagine that anyone would do that to a beef steer, yet that's the treatment many big game hunters use on the animals they harvest every year.

A few years back a friend of mine from college invited me to hunt deer on the Boulder Mountain in south-central Utah. We enjoyed hunting together in college, and I'd always wanted to hunt the area, so I readily agreed. Our base camp consisted of his family's cabin near Torrey, which provided several amenities not found in the typical deer camp.

On that four-day hunt, I didn't harvest a buck, but I saw a lot of beautiful country and learned some valuable lessons from my friend. The best thing I learned on that trip happened the first night at supper time. We'd had a long day on the mountain, and I wasn't really looking forward to another ham sandwich (my typical meal at deer camp).

My friend, Ron, announced that I could put my sandwich stuff away, because we were having steak and potatoes for supper. Sounded good to me, but I grew skeptical as I remembered how many times other hunting buddies had cleaned out their freezers and brought last year's leftovers to offer as camp meat.

Ron produced a pair of nice-looking, 2-inch-thick steaks that he plopped on the grill. As he cooked them, we discussed our strategy for the next day's hunt and I studied his method with the steaks, because I'm always interested in finding new ways to cook meat, especially if it involves a barbeque grill. 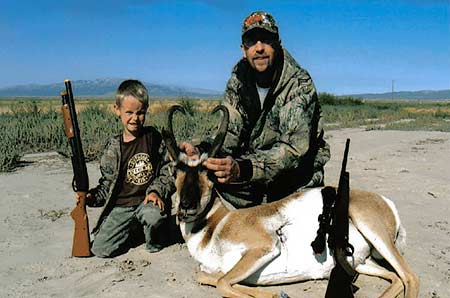 David and Justin Lee with a 2007 pronghorn buck.

David and Justin Lee with a 2007 pronghorn buck.

When he served them up, the steaks looked pretty typical: browned on the outside, with a pink strip in the center, just how I like 'em. I wasn't prepared for how it would taste. I couldn't believe it. I finally had to ask, "What are we eating?"

I'd never tasted deer meat like that. I figured he must have shot a yearling buck for camp meat to have venison like that.

"Nothing special," he replied. "Same thing I do with all my game meat."

Most of my venison recipes involve a cast iron skillet, onions and a can of Campell's soup. I've been eating deer, elk and antelope for over 30 years, and I've grown to expect venison to have a certain taste and texture, but I'd never tasted any venison like this. I had to find out how to do this myself!

"So what type of deer was this? A doe? A young buck?" I kept up with the questioning.

The next night, Ron produced another fine meal with steak as the main course, only this time, the protein came from a five-point bull elk. I'd never eaten so well at deer camp! I knew I had to figure this out before we went home. So I continued with the questions, and Ron supplied the answers.

After the kill, most big game hunters know that the first thing you should do is to get the animal cooled out as quickly as possible, and protect it from flies. This much I already knew. As it turned out, when caring for game meat, we prepare our game quite similarly. The main thing Ron was doing differently than me, when it came to taking care of his game meat, was that he ages the meat for several days before he butchers it. Most butcher shops don't have the luxury of extra space to age meat, so animals are processed as soon as possible. Ron's advice is to get the animal gutted, skinned, quartered, and on ice (or refrigerated) the same day you kill it, especially if you're hunting during the early hunts like archery and muzzleloader. 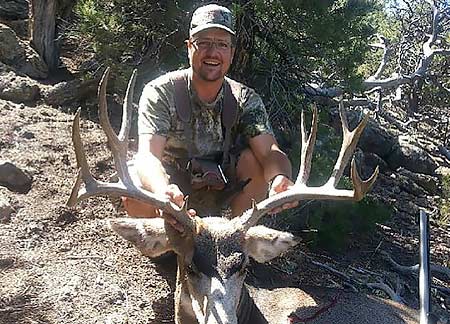 Ron, the venison guru, with a 2014 muzzleloader buck.

Ron, the venison guru, with a 2014 muzzleloader buck.

It's best if you can rinse all the blood, hair, and any foreign material off the meat, and then put the quarters (or boned-out meat) into plastic bags before you put it on ice, so it's not soaking in water as the ice melts. Rinsing the meat with clean, cool water also helps cool it down rapidly. Ice melts, so drain the cooler daily, and replace the ice as needed.

I prefer to use a premium five-day cooler and store the cooler in the shade when aging meat, to help the ice last longer. I like to age the meat a minimum of five to seven days before I butcher or cook it. Once you've aged the meat, cook it as part of your favorite recipe, try something new or freeze it until you're ready to use it.

I've been using Ron's method for 10 years now on everything from yearling buck mule deer to a mature 5 5 we took on the 2014 muzzleloader hunt. I even used it on an old Box Elder county buck pronghorn that was so old he'd worn his teeth down to the gum line. Those steaks were so tender you could cut them with a fork.

I've shared the meat with several friends and relatives, usually in the form of steaks on the grill. Most everyone asks the same question when they try it: "That's deer meat?!"

David Lee works in the Habitat Section as a project leader, implementing habitat improvements on wetland and upland habitats on wetland mitigation lands in central Utah. David enjoys spending time in the outdoors with his wife and kids.