A DWR employee tells one of his favorite pheasant hunt stories.

Running the Walk-In Access Program for the Division has allowed me the opportunity to deliver and release pheasants each week of the hunt. Some days I spend as many as 15 hours in my truck, driving from the grower to the release sites. 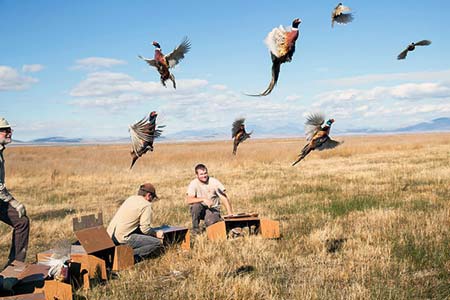 Releasing pheasants just before the hunt in 2013.

Releasing pheasants just before the hunt in 2013.

Last year, toward the end of the general season, I went out to hunt with some friends who were very excited to chase roosters. A group of five of us met on a cold November morning, ready to venture to an area where pen-reared birds were released.

Our hunting group consisted of one guy who had never hunted pheasants, one who hadn't hunted pheasants in more than 20 years, two who were new to hunting, and me (an avid hunter who goes after just about anything, from waterfowl to upland game to cottontails and big game). I just love this time of year.

We got to our location, talked with others already there, then headed in separate directions. It was fast shooting and comical at times as each of us had several opportunities at roosters.

I have hunted pheasants since I was 12 years old and I like to think I know a little about how to chase them. I knew they would run, and I knew they would hold in cover, but it's hard to know which. We created a small line for safety reasons and slowly pushed some very tall cover toward the water.

Wings beat and a rooster flew towards the morning sun. Guns sprayed shot at the wily old rooster, but he just kept flying. I couldn't get a good shot where I was standing, but my location was perfect for watching. I had to laugh and give some ribbing to the guys who had just emptied their guns. 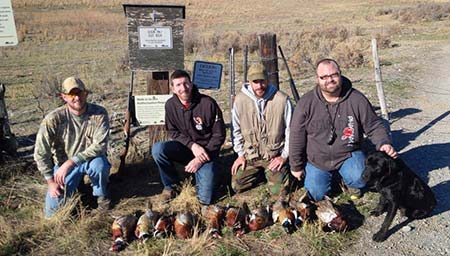 Our group during the 2013 pheasant hunt.

Our group during the 2013 pheasant hunt.

Even the easiest shots are missed when you rush or lose focus.

Later, we flushed a bird across the river and in one shot it sank to the ground. As Max, the black lab, retrieved the bird, we all high-fived.

At the end of the day, as we walked back to the truck, a rooster flushed. Having played guide that day, I was the only one in our group who hadn't gotten the limit of birds. This one was mine. The rooster came down the draw towards and past me. I fired once, twice, then I fired my last shell. On the third shot the rooster folded.

We took out some new dogs and new hunters and each of us left with sore arms, tired legs, better friendships and big smiles. It was a great adventure that we plan to repeat this year.

The pheasant hunt opens this weekend. If you're interested in chasing some birds, you can find all the information you need (including release sites) online. Happy hunting!

Clint started the Walk-In Access pilot program in the Northern Region in 2005, and has helped run it ever since. He enjoys the opportunity to open new areas for the public to hunt, trap and fish on.