Studying the movements burrowing owls helps us ensure their future 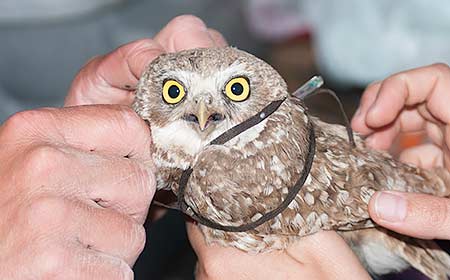 Biologists fit a burrowing owl with a PTT backpack unit.

Biologists fit a burrowing owl with a PTT backpack unit.

Burrowing owls are a unique as far as Utah owls are concerned. Prairie dog burrows are their favorite nesting sites in southeastern Utah. Scorpions, beetles and pocket mice are typical fare, but after the young are raised and cold weather makes food scarce, they head south. But where?

Knowing that can make a difference. For some reason this species is declining in parts of its range north and east of Utah, although for now, it is holding its own in our state. Could this be explained by differences in where these diminutive hunters spend their winter and the differences in the threats they face in those wintering grounds?

Led by Dr. Courtney Conway at the Idaho Co-operative Wildlife Research Unit, wildlife biologists all over the West are working together to find out what is going on with the burrowing owl. In the summer of 2014, Brian Maxfield (in the northeastern part of Utah) and I (in the southeastern part of the state) were able to contribute to this effort with DWR's support. The mission was to attach two different kinds of backpack gadgets to the little owls that would enable us to track their movements. 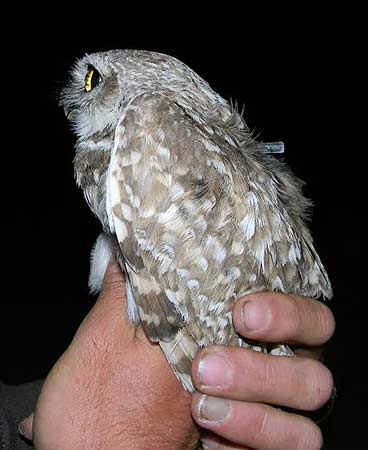 Take a close look and you'll see the geolocator on the owl's back.

Take a close look and you'll see the geolocator on the owl's back.

Geolocators record light levels that enable the researcher to determine approximately where the bird is. Think of it kind of like an almanac in reverse. Instead of looking up sunrise and sunset time, say for Salt Lake City on Feb. 5, you would know what the times were on that date and then go back to the table to try to figure out what city you are in. These units are fairly inexpensive, but they have a big drawback in that the information is stored on board, and you have to catch the critter again to download it.

PTT backpack units for owls are very expensive miniaturized Doppler GPS technology powered with a tiny solar panel. Using the ARGOS satellite system, they can report back to the researcher about once every two weeks where the bird has been with good accuracy. There is no need to ever capture the bird again. So this technology has a bigger initial investment, but the chance of a payoff is much greater.

During the summer of 2014, DWR banded 84 burrowing owls, put geolocators on 28 and PTTs on two. Catching the owls was fun, but more significant will be learning about the movements of these little guys. We will begin trying to retrieve geolocators in May after the owls return and have well established nests. 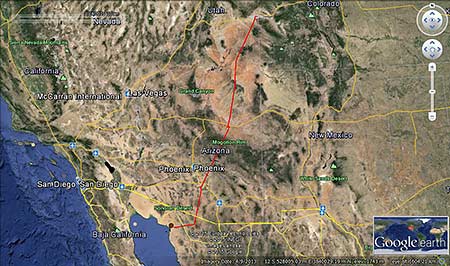 The red line shows the migration route of one of the burrowing owls we fitted with a transmitter backpack.

The red line shows the migration route of one of the burrowing owls we fitted with a transmitter backpack.

One of our PTT-equipped owls managed to evade prairie falcons, badgers and weasels and began her fall journey southward from Cisco, Utah on October 3. On October 8, she was on the edge of Grand Gulch in San Juan County, and by October 14, she'd found her way to an abandoned cotton field south of Phoenix, Arizona. On Oct. 19 she crossed the La Frontera "sin papeles." She has since spent her time east of the resort of Puerto Pe asco near a big open-pit gold mine called La Mina Herradura, the horseshoe mine.

It's just one piece in a big puzzle, but in a few years with researchers studying owls all over the West, we should have a much better idea about how to ensure the future of this species. We want generations of Utahns to enjoy the sight of these feisty little birds perched on old fence posts way out in the desert.