Bear cubs head back to the wild 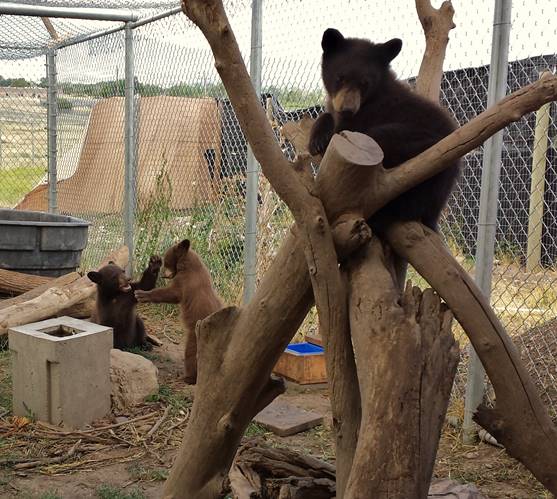 One of the facility's natural climbing structures, and some of the conspecific interactions that took place in the pens.

Many bear cubs are orphaned each year in Utah. Some lose their mothers to forest fires, while others are orphaned by vehicle-bear collisions or other human-related conflicts.

If the orphaned cubs are too young to survive on their own — and the Utah Division of Wildlife Resources (DWR) finds them before they perish — they have a good chance of surviving.

One of the facility's natural climbing structures, and some of the conspecific interactions that took place in the pens.

In the summer of 2014, six orphaned cubs were brought to a bear cub rehabilitation site in the U.S. Department of Agriculture APHIS Predator Research Station in Millville, Utah, where the DWR research occurred.

The cubs were nourished and provided with space to romp and play for the year. Throughout the rehabilitation there was very little human contact to ensure the bears retained their fear of humans. Loading two immobilized and recently collared cubs into their enclosures for transport to their release locations.

The research was unique. Before the young bears were released, they went through numerous tests to determine if they were bold, shy or somewhere in between when introduced to novel stimulus such as new items, and startle objects.

Loading two immobilized and recently collared cubs into their enclosures for transport to their release locations.

Consistent test results were the key to determine if the cubs had shy or bold animal personalities.

Some cubs shied away from new stimuli while others approached with curiosity. One test included placing the cubs in a new enclosure with the same layout as their previous one. The shy cubs responded by hugging the walls and cautiously moving around. The bold cubs began exploring immediately with little signs of fear.

Once their animal personalities were classified and they were mature enough, the young bears were released to remote locations throughout Utah. "They were then monitored throughout 2015 until they emerged from their dens in the spring of 2016," said Myers. 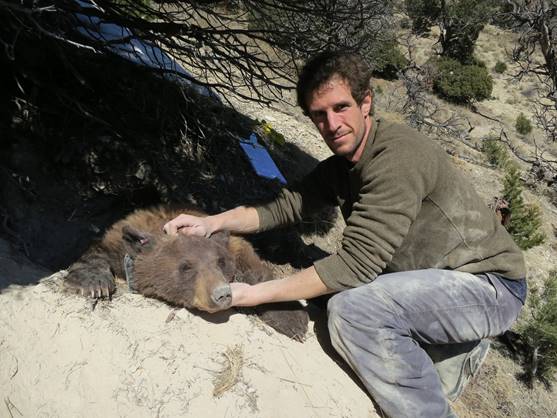 Patrick Myers has immobilized and extracted one of the bears from her den to assess her health and the fit of her collar.

The researchers were pleased to see that even though the cubs had been in close proximity to the smell of humans for many months, neither the bold or the shy bears sought humans once they were released. They all had healthy responses to their natural habitat. They searched for dens almost immediately, and remained in the remote locations.

Patrick Myers has immobilized and extracted one of the bears from her den to assess her health and the fit of her collar.

Although this is a small study, the initial results show that orphaned cubs, whether shy or bold, will likely avoid humans and retain their natural instincts if property rehabilitated.

This may be a useful management practice for restoring bears where populations are dwindling and habitat is ideal.

Shauna Leavitt is a guest contributor to the DWR blog. She writes for the Quinney College of Natural Resources at Utah State University and has written for many regional and national wildlife magazines including, The Mule Deer Foundation, The Wildlife Professional and People, Land & Water.