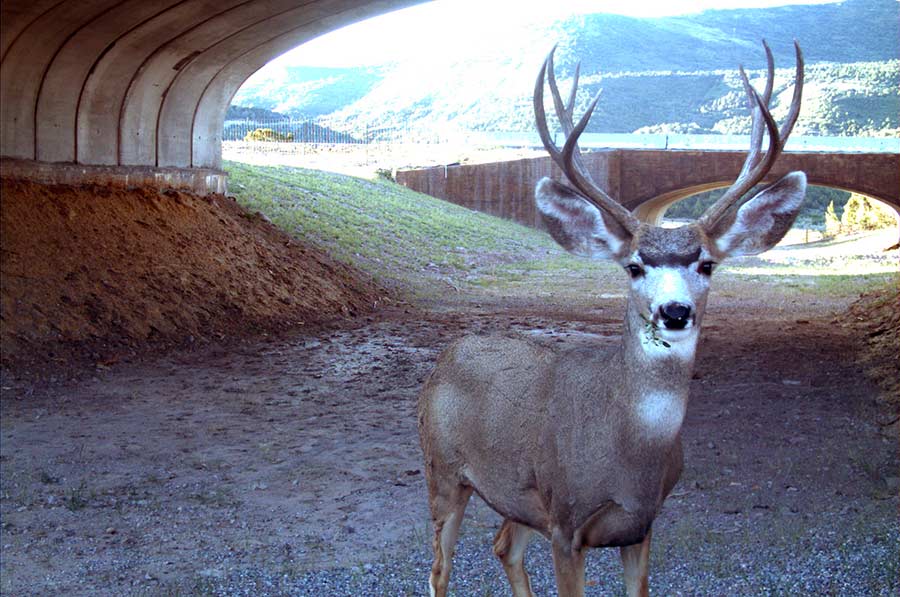 Connections between habitats are important for wildlife.

The State of Utah has done some remarkable work in addressing wildlife needs along Utah's roadways, especially during the past decade. The Utah Division of Wildlife Resources (DWR) is working alongside the Utah Department of Transportation (UDOT) to identify critical hotspots throughout the state where wildlife mitigation features are needed.

These crossings are important in reducing wildlife-vehicle collisions and in allowing wildlife safe movement over and under Utah's expanding transportation network. Wildlife crossing structures (underpasses and overpasses), exclusionary fencing and a variety of wildlife signs are some of the ways that UDOT and DWR are working to decrease the number of wildlife that are killed from vehicle strikes.

Utah currently has nearly 50 structures that have been constructed specifically for wildlife passage, and there are dozens more (culverts, bridges, etc.) that are used by wildlife to find safe passage across roads.

We put together a web map that shows where some of these wildlife crossing structures are located within Utah. 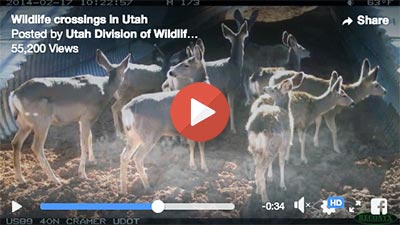 It takes a lot of planning, coordination and funding to get wildlife needs built into the transportation network. As a result, wildlife crossings can't be placed everywhere. UDOT and DWR work together to determine potential locations for wildlife crossings. Crossing locations are selected based on several factors, most importantly, the number of wildlife vehicle collisions that are occurring in an area.

These locations are then prioritized based on numerous criteria including: Is an upcoming highway project already being planned for the area? Is there enough funding to include a wildlife crossing in the project? If placed, will the crossing facilitate wildlife movement via established migration routes? Will the anticipated benefits of a crossing outweigh the cost of constructing it?

From initial concept to actual construction, most wildlife crossing projects take several years or more to become a reality due to the planning and funding processes that UDOT is required to complete. 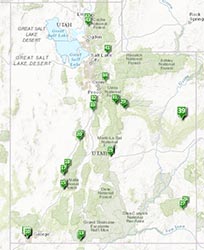 UDOT and DWR have had a lot of help from other partners in Utah's wildlife crossings effort. Some of these partners include: sportsmen organizations like the Mule Deer Foundation, Sportsmen for Fish and Wildlife, the Rocky Mountain Elk Foundation, the Utah Foundation for North American Wild Sheep and Safari Club International; counties; the Bureau of Land Management; US Forest Service; US Fish and Wildlife Service; the Federal Highway Administration; and Utah State University.

UDOT, DWR and partners contributed funding to complete a six-year statewide research project (2007-2013) to determine how well wildlife crossing structures around the state are working. Dr. Patricia Cramer was the Principle Investigator on this project which resulted in millions of photographs being taken on dozens of structures over the study period.

Dr. Cramer documented more than 43,000 successful mule deer passages through wildlife crossings over the six-year period. She also documented use of crossings by elk, moose and a variety of other Utah mammals.

Ashley Green is the Habitat Section Chief for the Utah Division of Wildlife Resources. He loves to do just about anything in the outdoors as well as traveling with his family.