I prefer hunting over store-bought meat

It's mostly about knowing where your food comes from.

Where does food come from? A very simple question with a simple answer; most would consider this a silly question. I often think of the joke that meat comes pre-wrapped from a grocery store or in a sack in the form of a burger or nugget. 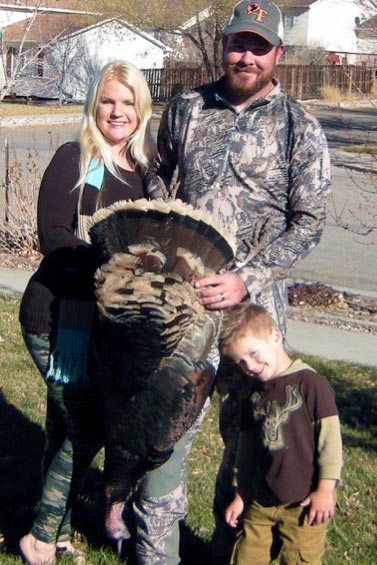 Jason, the author, with the turkey he harvested for Thanksgiving.

It seems we, society, are getting further and further removed from our food sources. It is very clear that life and death are interconnected — there is no life without death. All food comes from a living creature in one form or another, whether plant or animal.

Sit back for a second and see if you can answer this question: where does your food come from? Can you really answer that question? A cornfield in Iowa? A feedlot in Kansas? A dairy in Wisconsin? A farm in a foreign country? How was that food raised, handled and shipped? Again, more questions that aren't easy to answer.

I can answer these questions, at least when it comes to the protein I consume. The greatest advantage of hunting, in my opinion, is knowing exactly where my meat comes from. I know it's organic, natural, healthy, local and wild, without hormones. I accept that a living creature died to feed me, and I was the one that took its life. I did not hire someone to do it for me. This gives me a feeling of self-sufficiency; I can provide food for myself and for my family.

Since Thanksgiving is this week, I want to share a hunt from a past November to help illustrate my point, and maybe inspire you to go try harvesting your own food.

In 2014, Utah offered a fall wild turkey hunt for the first time since 1984. The fall turkey hunt overlaps the Thanksgiving holiday. I decided to obtain one of the fall permits and try my luck at harvesting a fall turkey. Generally, the fall hunting season is harder because the turkeys aren't as vocal. Calling turkeys in the spring is the best way to get a bird within range. I did some pre-season work, looked at maps, landownership and turkey distribution, and talked with people who knew where the turkeys were. I was determined to harvest a wild turkey to eat on Thanksgiving.

Beeep, beeep, beeep — the 4:30 a.m. alarm isn't my favorite sound. I slowly pulled myself out of bed, still mostly asleep. Then I realized it was the day before Thanksgiving and I was going to try and harvest a wild turkey. That was enough motivation to get up the rest of the way up. I had laid out all my hunting gear the night before.

I loaded everything into the truck, including my dogs, Trigger and Gauge. If the turkey hunt was a bust, I could hunt pheasants somewhere. The area I chose to hunt, based on my research, was a two-hour drive, and I wanted to catch the birds as they were coming out of their roosts and starting to fill their crops. The drive was quiet and peaceful. I had a few butterflies in my stomach, as I usually do prior to a hunt. It's the anticipation of now knowing what's about to happen. I really like that feeling. 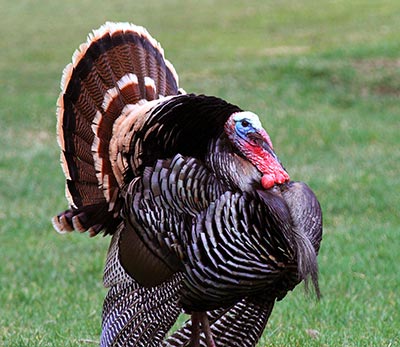 I pulled into the hunting area right as it was getting light enough to see. I had never been to this area before, but I had good maps and a GPS with me. I drove into an area that was mostly private, with some public land. I drove around for a bit and decided I should move to another area, about five miles away.

I looked into a plowed wheat field and saw some turkeys. My friend's suggestion was spot on. I stopped, pulled out my binoculars and counted 39 turkeys of mixed sex and age. Perfect! One problem though, the turkeys were on private property and I did not have permission to hunt this property. The field was next to some public lands, and I suspected the birds would fill their crops and head to the public lands, where there was adequate cover to loaf for the day, but on the other hand they might not.

I knew the adjacent landowner and gave him a call. He was able to give me the contact information for the landowner of the plowed wheat field. I gave the landowner a call. I've had these conversations go both ways: a nice "sure, you can hunt my property," and some very stern "NO!" responses. So I was a bit nervous. The one advantage I had was that this flock of turkeys was bigger than the landowners really wanted to tolerate. I got a hold of the landowner and he was extremely nice and helpful, and gave me permission to hunt his field.

I put on my face mask and gloves, grabbed my calls and loaded my shotgun. I slowly started to approach the large flock of turkeys, using the ditch vegetation to cover my approach. I got within 35 yards of the birds, and I could see them feeding in the field on the other side of the thick ditch cover. The cover was too thick to shoot through. I had to get to an opening.

With 39 sets of eyes and ears, this is not easy. I crept around the edge and was ready to come around the corner and get a perfect opportunity for my fall turkey. I poked my head around and nothing. To my disappointment, they were all gone! I didn't see or hear them leave. They must have headed to the southeast towards the thick junipers.

I started back towards where I thought they might have gone. I walked through the trees until I popped out onto the public lands. I pulled out my slate call and did some hen yelps to see if I could get a response. Nothing. So I did a 300-yard loop to see if I could find some tracks or hear them — something, anything. How could 39 turkeys just disappear?

I made it all the way back to where the truck was parked on the boundary of the public and private land, where I made the original hen yelps. I decided to walk past the truck and keep trying. Twenty yards past the truck, I caught a glimpse of a turkey in the junipers.

They must have come to the hen yelps I made 20 minutes earlier. I slowly worked towards them, gun ready. All at once, a turkey came out of the trees, crossed the fence and was now on public ground. I was prepared to shoot any turkey — my permit was valid for a male or female. I just wanted a turkey for Thanksgiving. This turkey was 30 yards away and I had a clear shot. 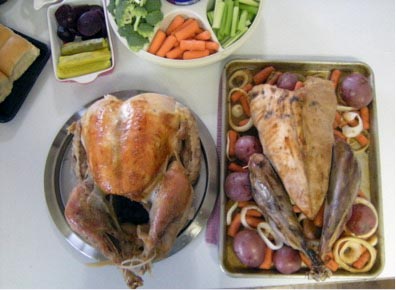 he domestic, Butterball turkey is on the left. Wild turkey on the right.

I instinctively pulled up my shotgun and fired a very quick shot, almost like I would on a flying grouse. The recoil on turkey guns it quite powerful and it took me off the turkey for just a split second. Then more than 30 turkeys erupted from the junipers. Chaos and beauty at the same time. I thought to myself I missed. How could I miss? I was totally down in the dumps; I just blew a perfect opportunity.

I decided to walk up to where the turkey was when I shot. I got about 10 yards away and saw the turkey lying there.

I had actually made a perfect shot and killed the bird instantly, but between the recoil and flushing turkeys I hadn't realized I had harvested the bird. I was ecstatic about my accomplishment. I called my wife right away and told her we would be having wild turkey for Thanksgiving! She was very excited too. I could hear our three-year-old boy in the background saying "yaaaaa, daddy shoot turkey!"

The turkey was a large tom, probably four years old, weighing in at 22 pounds. I called the landowner and let him know how I did and thanked him for allowing me access, even though I didn't end up harvesting a bird on his property, it was still one of the turkeys in his field.

I got home at about 1 p.m. and my little boy came running out to see daddy's turkey. We took some photos of our Thanksgiving turkey. I spent the afternoon taking care of the bird, and we put it in the oven very early the next day. I told my mom I would bring the turkey, but she wanted to have a traditional Butterball turkey, just in case. We would be feasting on both kinds of turkey. Luckily we have a big family. Our little boy really liked it when I told him the turkey he was eating was "daddy's turkey" from the day before.

We were able to have a very direct comparison of a wild and domestic turkey. It was fulfilling to know exactly where the wild turkey was harvested and how it was handled and cleaned. I know it was as natural as possible. There were very clearly anatomical differences between the Butterball turkey and the wild turkey. The wild turkey had a much longer and taller breastbone, longer and stronger legs with darker meat. Domestic turkeys have clearly been bred to maximize the growth potential and white breast meat.

So, you're probably wondering how they each tasted. They tasted different from one another. Neither was better or worse — just different. The wild turkey was a finer texture and had darker meat overall. I will say I liked them equally, but I'd take the wild turkey over the domestic turkey any day of the week!

I hope my story got you thinking about harvesting your own food. Upland game hunting is a great way to start, and we have plenty of resources online to help you out.

Jason Robinson is the Upland Game Program Coordinator for UDWR. He has a Master's in wildlife studying greater sage-grouse in Utah's west desert. When Jason isn't at work, you'll find him hunting upland game and big game, and spending time with his wife April and dogs, Trigger and Gauge.