It may be a long way from Africa, but Utah has its own little Serengeti where herds of deer and elk roam. As a wildlife biologist for the Utah Division of Wildlife Resources (UDWR) I've flown over a hundred wildlife surveys during the last quarter century. It was on one of those long days of flying in a helicopter counting elk that I began to realize how amazing this area really was. 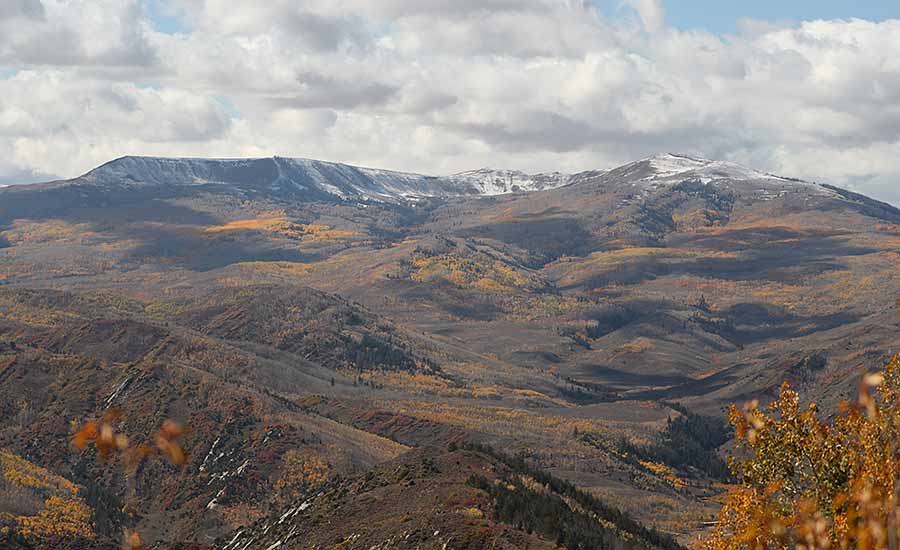 The Tabby Block ranges in elevation from 7,400 feet in Red Creek to 10,000 feet on top of Tabby Mountain.

The Tabby Block ranges in elevation from 7,400 feet in Red Creek to 10,000 feet on top of Tabby Mountain.

We'd been flying for several hours that day when we'd counted our way onto the Tabby Mountain Wildlife Management Area (WMA) in western Duchesne County. As we started into the large flats south of Tabby Mountain we spotted a huge group of elk. The pilot skillfully brought us in just close enough to spread the herd out into long lines so we could count and classify them by age and sex, but not too close to scatter them in different directions.

There were almost 300 elk in that herd.

As my mind swirled trying to write down how many of each we'd seen in the herd, a fellow biologist in the back seat came over the intercom saying there was another group of elk nearly as big just off to the east. With that announcement I heard a laugh come from the other back seat as the local conservation officer declared there was another huge herd to the west too, he just hadn't wanted to interrupt our counting of the original group we were following.

There were elk everywhere! As we hit the edge of the flats where a line of trees had been left to provide cover around a recently anchor-chained area, dozens of mule deer started popping out in every direction like popcorn in hot oil. We didn't even try to count all the deer as they quickly scattered and hid in the trees.

We spent the next half hour flying those groups of elk to sort out what was there, and even took pictures of the large groups so we could blow them up later to make sure we got the counts right (see pic. of winter elk herd). There were almost 1,000 elk on those flats that day and that's when I began to understand how important this area really is to Utah's wintering wildlife. That was the day we started to call it "The Serengeti."

A month or so later, as the grasses were just greening up in the spring, I sat on a little knoll in the same area early one morning looking for sage-grouse that strut in the area. As the sun came up there were elk everywhere. From that one spot I personally counted over 700 elk through my spotting scope. 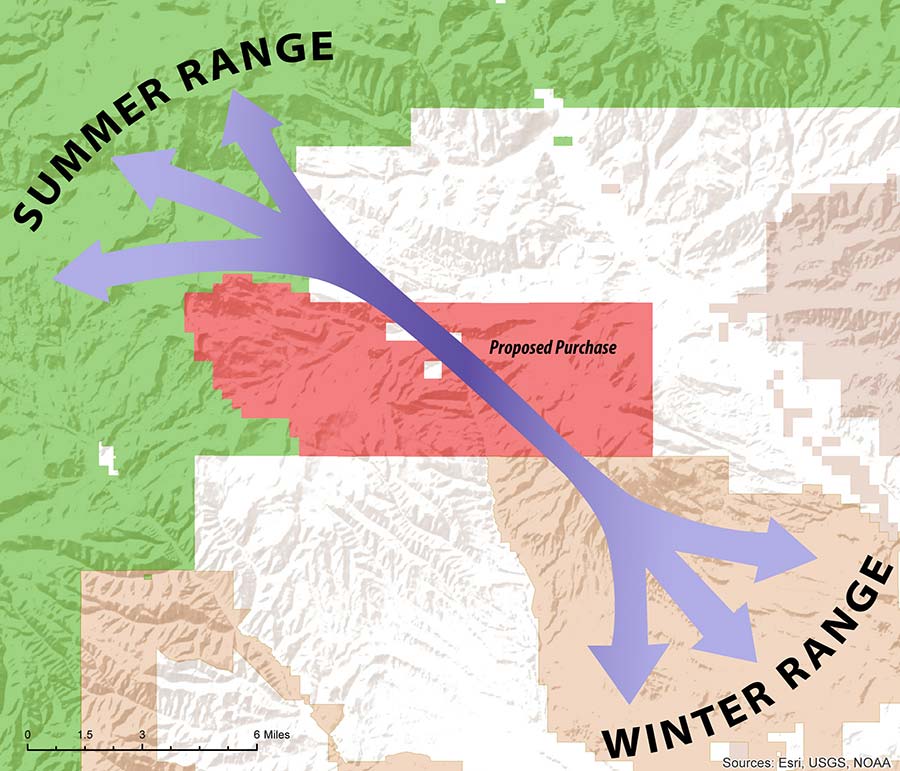 There were elk in every direction I looked. It was an impressive sight. I'd just counted more than half the subunit's objective at the time from a single spot. As I drove out that morning there were deer everywhere, especially in the newly treated and reseeded areas on the WMA. For wildlife, Tabby Mountain WMA is an amazing place.

On a recent elk survey we counted just under 3,000 elk on the entire Wasatch Mountains, Currant Creek subunit. Of those 3,000 elk, we counted 2,000 elk on the Tabby Mountain WMA. That's the highest winter elk densities in Utah, and if you don't count places where humans feed elk, it's one of the highest densities in the United States. Depending on the winter conditions, the Tabby Mountain WMA winters at least 1,500-2,000 elk and 7,000-9,000 deer annually. It also winters moose, cougar, bear, coyotes, bobcats, sage-grouse, eagles, numerous bird species and a host of other wildlife. Because there are no BLM lands in western Duchesne County, the Tabby Mountain WMA is the only public land that is a protected wintering area for wildlife within the unit.

The reason there's so much wildlife on the WMA is because it's managed specifically to benefit wildlife. It's primarily a wintering area, so motor vehicle access on the property is limited during the winter months to reduce disturbance while the animals struggle with the snow and cold.

Numerous projects have been completed across the WMA to improve the habitat and forage for wildlife. Since 2004, the UDWR and its partners including the Mule Deer Foundation, Sportsmen for Fish and Wildlife, and the Rocky Mountain Elk Foundation have invested around $750,000 in habitat improvements on the WMA, and it shows in the number of animals it supports. The southeastern portion of the property where a lot of the elk winter was originally private property owned by conservation-minded livestock operators that improved the land with vegetation treatments and water developments.

They then further protected the land with a Conservation Easement through NRCS and created a Cooperative Wildlife Management Unit (CWMU). Later, when they decided to get out of the livestock business, they decided to sell the property to the UDWR. UDWR — with help from conservation groups — purchased the land and combined it with the existing WMA lands to protect what is the largest WMA in Utah. The Tabby Mountain WMA currently encompasses nearly 50,000 acres of crucial mule deer, moose and elk winter range.

The majority of the deer and elk that summer in the Currant Creek, West Fork of the Duchesne and northern Strawberry Valley areas move east in the fall to winter on the Tabby Mountain WMA (see map with arrows showing migration). To get there, they either cross private property or the Tabby Mountain Block owned by Utah's School Institutional Trust Lands Administration (SITLA).

A recent elk survey counted almost 3,000 elk on the Wasatch Mountains, Currant Creek subunit. Of those 3,000 elk, we counted 2,000 on Tabby Mountain.

A recent elk survey counted almost 3,000 elk on the Wasatch Mountains, Currant Creek subunit. Of those 3,000 elk, we counted 2,000 on Tabby Mountain.

The SITLA Tabby Block is a 28,400-acre parcel of high quality habitat that connects Uinta Wasatch Cache National Forest lands on the west to the winter ranges on the Tabby Mountain WMA to the east. The Tabby Block was originally national forest land that was traded to SITLA back in 1966 in exchange for scattered Trust Land parcels within the national forest across the Uinta Mountains.

SITLA trust lands, including the Tabby Block, are not the same as other state or public lands. SITLA's mandate is to manage these lands for the financial benefit of Utah schools. They are under no obligation to maintain public access for hunting, fishing, grazing and other uses. Trust lands can be sold to private parties if SITLA believes it provides the best benefit for their trustees. SITLA lands are currently being leased by the UDWR to provide public hunting and fishing access on a yearly basis. This lease and access could go away at any time if a better offer comes along. There is no assurance these lands will be available for hunting and fishing or any other public use in the future.

SITLA is currently seeking bids to sell the Tabby Block, which is a critical chunk of habitat. UDWR wants to keep this amazing piece of wildlife habitat and essential migration corridor protected and in public hands for the people of the State of Utah while allowing SITLA to make the money they need to invest for the benefit of Utah schools.

Governor Herbert has put a large chunk of money in his proposed budget this year to help UDWR buy the parcel from SITLA and help keep it in public ownership and protected in perpetuity. The rest of the funding will have to come from conservation partners, including hunt and angling groups.

It's a win-win proposal. This is a once-in-lifetime opportunity to preserve a unique public land treasure that maintains valuable ecological, recreational, wildlife and aesthetic values. If the state is not successful in acquiring it, the block will likely go into private ownership where all public access will likely be lost and UDWR's ability to manage it for fish and wildlife would be greatly reduced. If it's sold into private ownership, the block will likely be subdivided into numerous small ranchette parcels which come with increased roads, habitat loss, traffic, dogs and other disturbances. If subdivided, the wildlife will be greatly reduced and we will lose the public land pathway to "The Serengeti." The UDWR will have to reduce elk and deer herd sizes to keep them from impacting private ranches and it will be an overall loss for wildlife and public hunters and anglers. 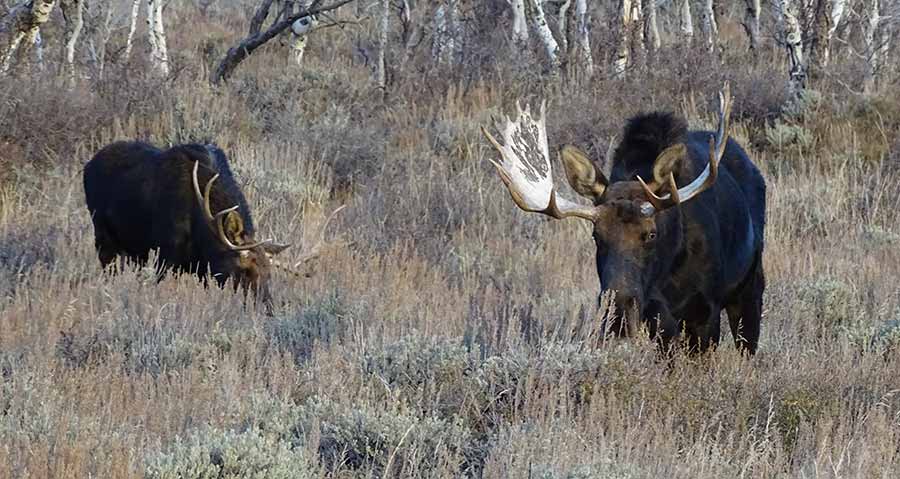 However, if the state can purchase the Tabby Block, we will be able to better manage it in conjunction with the Tabby Mountain WMA for wildlife habitat and wildlife-related recreation. Both parcels can be managed as a contiguous block of habitat with projects to improve the vegetation, manage the timber for healthy forests, increase water availability and quality, reduce erosion and protect the stream through road and crossing improvements, and reducing the number of illegal roads and trails that aren't needed to leave refuge areas for wildlife.

The result is hunter and angler access and critical wildlife habitats would be permanently protected into the future.

The Tabby Mountain area is truly an amazing piece of Utah. I've personally spent many days hunting deer and elk on the Tabby Block as well as enjoying it for hiking, fishing and wildlife watching. As a biologist, I've talked to hundreds of hunters hunting on the property and checked hundreds of deer and elk that hunters bring through game check stations that have been harvested on the Tabby Block.

As a biologist and as an avid hunter and angler, I consider this a natural treasure that we just can't give up. It's essential that we keep the Tabby Block protected in public hands and manage it for wildlife so the herds on "Utah's Serengeti" will be around for future generations to enjoy!

A version of this article is scheduled to appear in MDF Magazine.

Randall has been a Wildlife Biologist in the Division's Northeastern Region since 1995. He has a Master's Degree in Wildlife and Range Management from Brigham Young University. He loves Utah's wild animals and wild places.