There are few moments in life that seem to last as long as the minutes you spend waiting to go after an animal you've just shot with an arrow.

In that small eternity, you think about everything leading to that moment — the weeks of backyard archery training; time spent memorizing roads, terrain and boundaries; miles hiked in silence; and a continuous replay of your arrow flying away from you. A year's worth of emotion packed into a few quiet minutes. 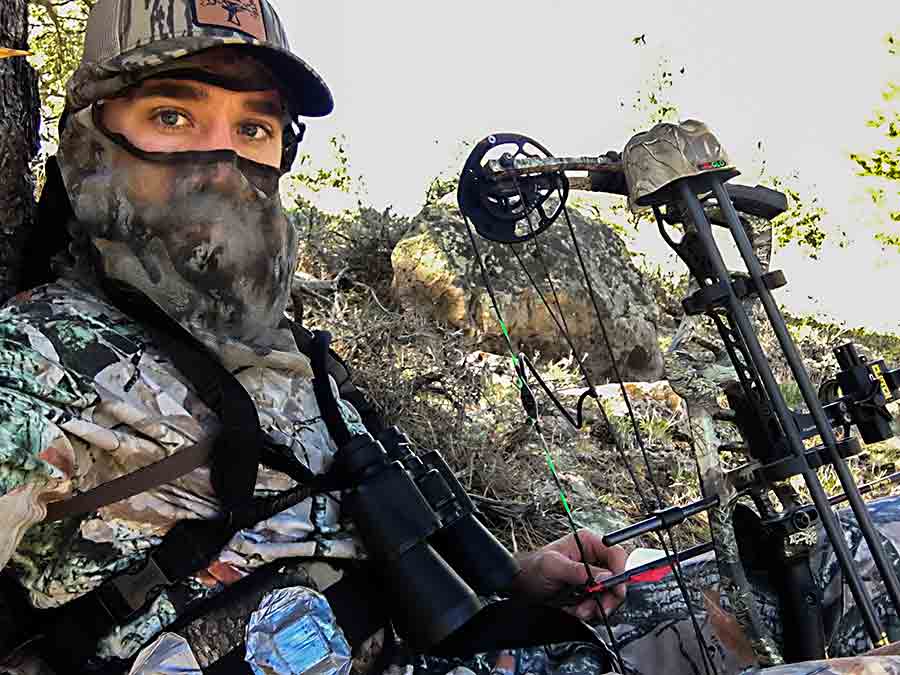 This year wasn't my first season hunting deer with a bow, but previous attempts were unsuccessful, and this was my first time archery hunting in Utah. It's a totally different game than the rifle season: The days during the archery hunt are longer and hotter, the trees are greener and more concealing, and being 100 yards away from an animal is no longer close enough. Being somewhat new to all of this, I fully expected this season to be a "practice run" for archery hunting.

Luck, however, came early on in my hunt when I happened upon a large pond, no doubt one of a handful still surviving the drought. I planted myself in the shade on a hillside overlooking the pond and waited for several hours. More than a dozen does wandered in and out of my view of the pond throughout the afternoon, sometimes drinking alongside black angus cows splashing in the mud.

Patience is a word that is thrown around a lot in the sport of hunting, but curiosity is often the stronger word in my vocabulary. Sometimes being curious pays off; other times it blows my cover. From where I sat, vegetation and terrain made it impossible to see whence the deer came or where they were going. A limited viewshed also meant limited opportunities for a clear shot. Before long, my imagination began to conjure ideas of what lay just out of view, and my patience ran out.

I made my way to the top of the hillside, which flattened about 100 yards above the pond. Here the ponderosas thinned out, and staying unnoticeable became more difficult. My steps got slower and more deliberate as my eyes reached as far through the trees as they could. By now, my eyes were a little sore from the intense, repeated examination of every bush and shade pocket, looking for the flinch of an ear or the tip of an antler.

Some distance ahead, I stopped and scanned a thick pocket of scrub oaks with binoculars. Everything appeared just as it had all day until something tiny seemed to jump out at me through the brush — a black, shiny eyeball. It was a deer, and I was sure it could see me. I immediately expected the deer to go bounding off, but when nothing happened, I could see that it was looking just beyond where I stood. So I waited. 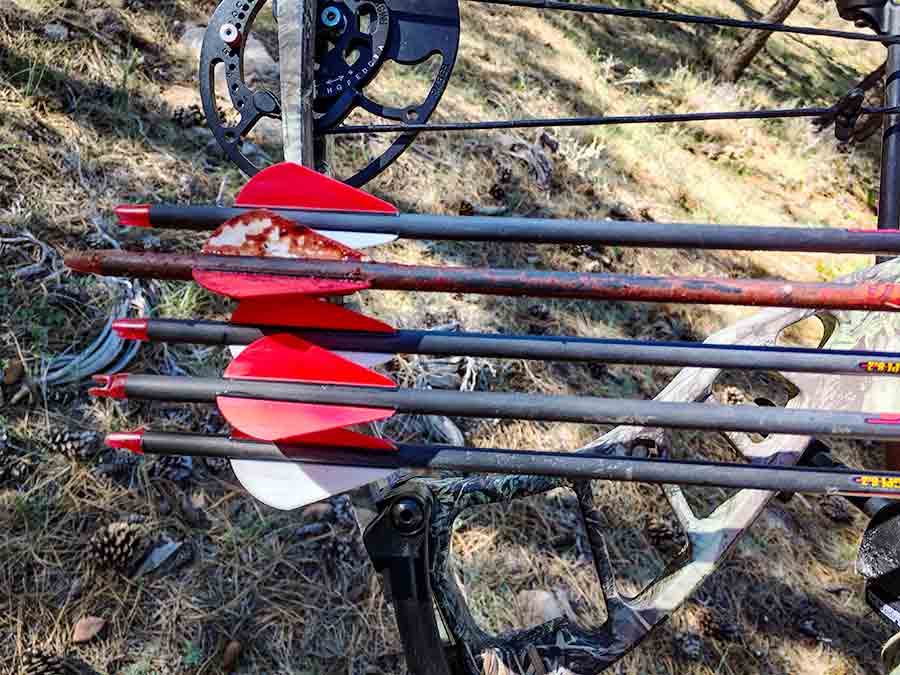 I got up and soon found both my arrows — one of them covered in dirt, the other covered in blood.

I got up and soon found both my arrows — one of them covered in dirt, the other covered in blood.

The deer and I stood motionless for about 30 minutes. Then it turned its head, and through the dense brush, I could see antlers. Eventually, two does walked out into view, but the buck stayed behind in the trees. I wanted to reposition myself behind some better cover (and get more comfortable), but it seemed at least one of the three deer was always looking in my direction at every moment. Finally, the buck took a few steps forward and out of my sight, so I slipped behind a boulder and slowly raised my head over the top.

When the buck reappeared, I could see he was young — a small velveted three-point. Was this the one? He wasn't a big buck, and I knew I'd come across more deer in the next couple of days. But several advantages started to stack up: This buck would likely give me a clear shot very soon, an opportunity I might not see again in this trip. My day's hike had taken me in a large circle, and I estimated I was less than a mile from my truck, so packing this deer out and getting home early would be easy. And this would be my first chance at shooting a deer with a bow. Yes, this was the one.

I couldn't get any closer without losing cover, so I ranged the distance to several trees and rocks where the buck might end up. I nocked an arrow and set the sight pin on my bow to 60 yards. As the buck walked out and faced me, I realized I couldn't feel any wind. This wasn't a bad thing, but it wasn't a good thing either; I just hoped the buck would give me a clear shot before he inevitably picked up my scent.

He came forward then turned broadside near one of the rocks I'd scanned with a range finder. I took a quick step out from my boulder, pulled back my bowstring and leveled the pin behind his shoulder. Before another thought, the arrow sailed toward the buck and whizzed over his back, crashing in the dirt beyond him. The two does bolted, and I knew it was all over.

To my surprise, the buck took only one step and stopped to look around, apparently confused at why the does had panicked. My shaking hands quickly worked another arrow out of my quiver and adjusted my sight pin. I waited for things (mostly myself) to calm down until the buck turned broadside again, about five yards in front of where he stood before. I drew back the string, forcing myself to breathe and focus. My finger slowly squeezed the release aid until it clicked and the arrow flew. This time, I heard a loud thwack, and the buck ran around the hillside, out of sight.

They say you're supposed to wait 30 minutes before going after an archery kill, but sitting still that long seemed impossible. My hands shook and my breath trembled as I tried to look through binoculars at where the buck had stood. As the minutes sluggishly ticked on, my mind began to replay the shot again and again. But what was glaringly missing from each replay was knowing exactly how good the shot was or where the buck went after leaving my sight. It was excruciating. 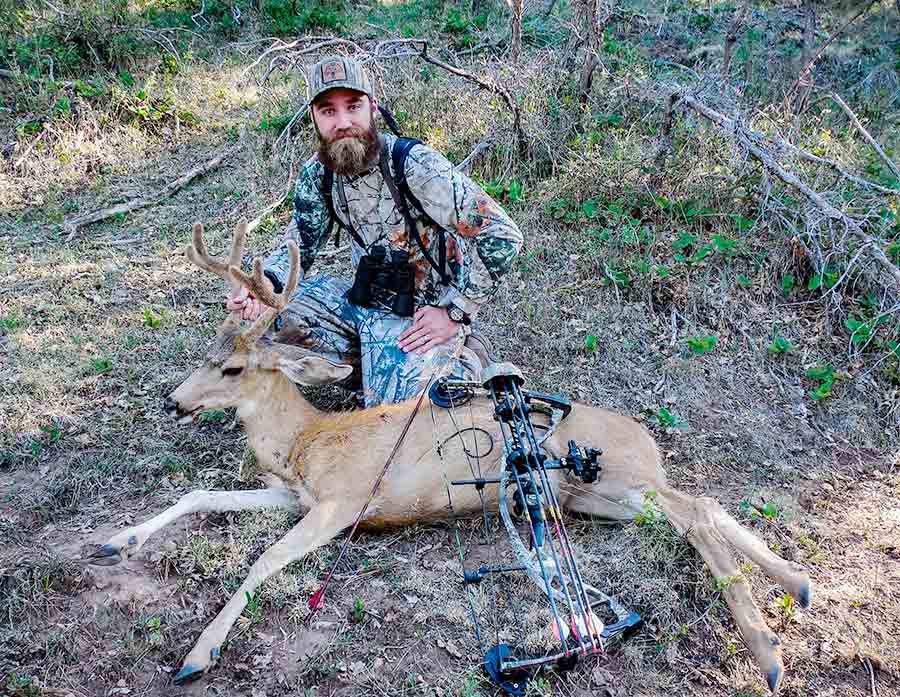 I'm still relishing the wonder that comes from a successful hunt and a fruitful harvest. And when I'm lucky enough to harvest again, I hope I don't lose a beginner's appreciation for it.

I'm still relishing the wonder that comes from a successful hunt and a fruitful harvest. And when I'm lucky enough to harvest again, I hope I don't lose a beginner's appreciation for it.

At 15 minutes, I could stand it no longer. I got up and soon found both my arrows — one of them covered in dirt, the other covered in blood. Excitement came over me, followed by an overwhelming sense of urgency. It was a familiar feeling from previous hunts: happy you'd hit something but morally responsible to ensure the completion an ethical harvest.

I walked in a zigzag pattern in the direction the buck ran, scanning the brush and the ground for blood. I rounded a corner of the hillside, and before finding the first bloody leaf, I saw the buck dead only a few yards from where he left my sight. He was a beautiful animal, and I felt grateful for such a close, personal encounter with him.

You'd be right if you attributed my success as an archery hunter to beginner's luck. But as a beginner, I'm still relishing the wonder that comes from a successful hunt and a fruitful harvest. And when I'm lucky enough to harvest again, I hope I don't lose a beginner's appreciation for it.

Morgan is the conservation outreach manager for the Southeastern Region of the UDWR. He is a former journalist, and enjoys writing and helping people discover Utah's extraordinary wildlife.