The one that got away

We had all the advantages, but the mountain lion won the game.

IT WAS MAY. I looked to the east, idly wondering whether or not I could see Koosharem from our position on Monroe Mountain. My vantage point was elevated that day, as I was not only on a mountain, but atop a mule on a mountain. It had been a long hard day and the animal's mood was characterized by a desire to return to the trailer. 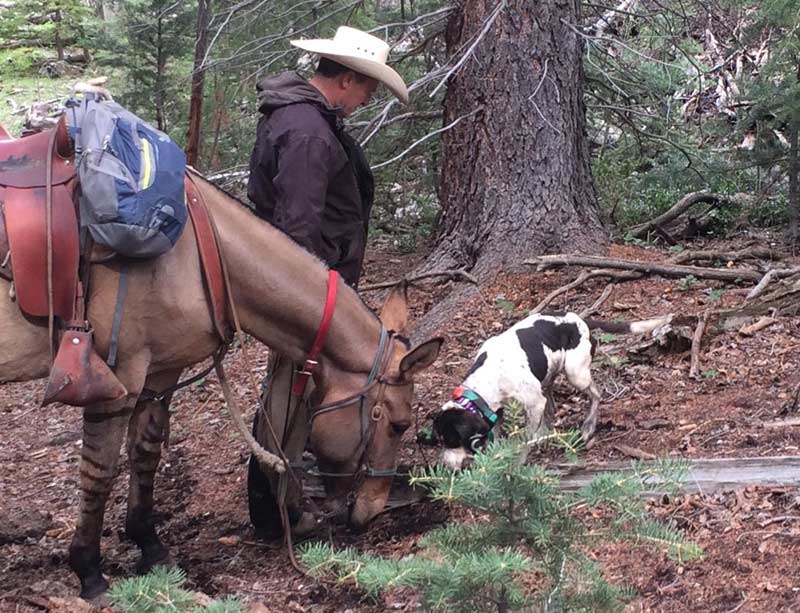 I was tired as well but I had enjoyed the day. We had left the truck and trailer that morning in search of a female mountain lion who needed her collar changed. This happens when animals grow, as is often the case when bear cubs are collared, or when a collar's batteries are nearing the end of their expected lifetime. The goal was to catch her, remove the old collar and put on a new one.

Dogs are key to this process. Given the age-old animosity between cats and dogs, lions generally flee and eventually climb a tree when pursued by canines. Properly trained hounds have the discipline and gravitas to keep the cat treed until the panting humans arrive. A sedative-filled dart is shot into the large muscle mass of the cat's hindquarter. After it succumbs to the drug, one lucky crewmember gets to climb the tree and either carry the lion down or attach a rope in order to lower the cat down to the ground. Sufficient time is given for the cat to relax and slip into unconsciousness, for it would be jarring indeed to climb a tree and meet a half-asleep (and therefore half-awake) mountain lion.

The group that set out to accomplish this goal contained myself, PhD student Peter Mahoney, the DWR's wildlife veterinarian Dr. Annette Roug and one of the DWR's predator specialists, Clint Mecham. The group was rounded out by several hounds and four mules whose names I've since forgotten. 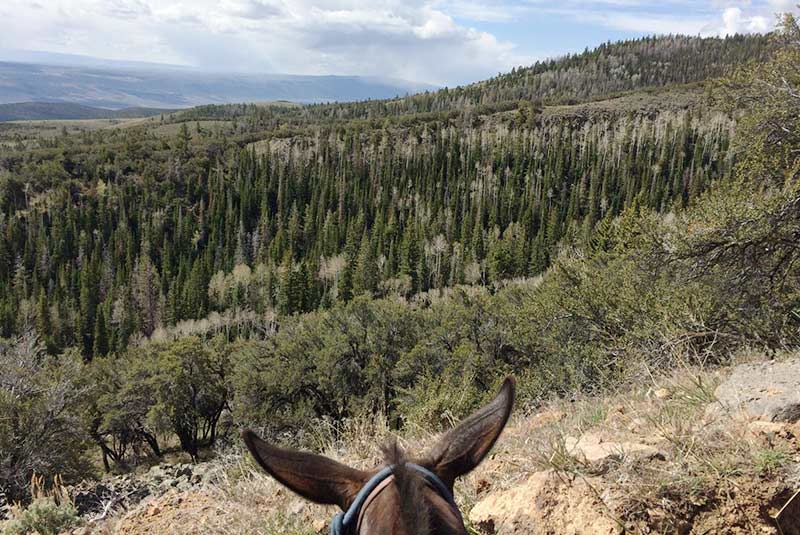 She's out there somewhere.

She's out there somewhere.

We set off with high hopes. The female lion's signal — the beeping on a specific frequency emitted by her collar — indicated that she was above us on the mountain. I spent the next two hours trying to conform myself to the shape of the saddle as we labored upwards.

We reached a ridgetop and again broke out the telemetry gear. Clint watched his hounds critically for their input as where this cat might be. We determined that she was on the next ridge over. It seemed tantalizingly close but was in reality separated from us by a deep, heavily wooded drainage.

We headed towards the other ridge (and into the drainage) trying to find the least steep route. It was a good idea in theory but we soon encountered the first wave of what turned out to be an expansive sea of downfall. The steepness of the terrain, combined with the crisscrossed, piled-up tree trunks dictated that we dismount the mules and lead them through the maze.

I learned the value of mules that day. As we climbed over fallen trees, weaved between the creaking, leaning trunks known poetically as widowmakers, and ducked under logs, the mules followed without complaint. Their attitudes about the situation may not have joyous but I was impressed. I suspect that a horse dropped into that mess of fallen timber would have rolled up its eyes and died on the spot. 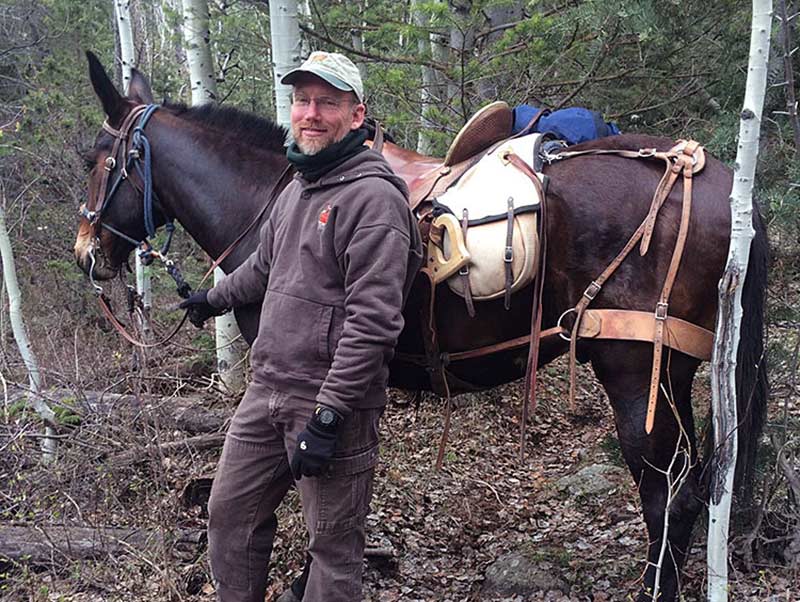 Troy — the author — with his mule, in search of the cougar.

Troy — the author — with his mule, in search of the cougar.

I felt a twinge of hopelessness when looking at the downfall surrounding us on all sides. But I knew from prior experience that following lions is rarely easy in mountainous terrain. And I had the utmost confidence in Clint. He was comfortable in the backcountry after decades of experience and led the way as his hounds snaked back and forth amid the legs of our mules.

Our position in the drainage meant that our telemetry signals were bouncy at best and even the dogs weren't having much luck. There was nothing to do but get to that next ridgetop. Once there, we could formulate a plan as to how best approach her position.

It took time, and more climbing through the ever-present downfall, but we eventually approached the top of the ridge. We were all ready to be done with fallen trees, as evidenced by the fact that my mule was using his head to push me out of the downfall zone.

We topped the ridge with a palpable sense of relief. Peter slowly rotated around, using the telemetry antenna to seek the strongest signal. I noted with some consternation that when he found the signal, it was coming from the wrong direction. Clint consulted his hounds. The dogs' noses agreed with the beeping telemetry receiver: the cat was behind us, likely on the very ridge we had left a few hours ago. While we were toiling to reach her location, she was silently gliding past us, determined to keep at least one drainage between herself and this bothersome group of humans, mules and dogs. It was afternoon already and we knew it would take us too long to return to that ridge. Basically, she skunked us. 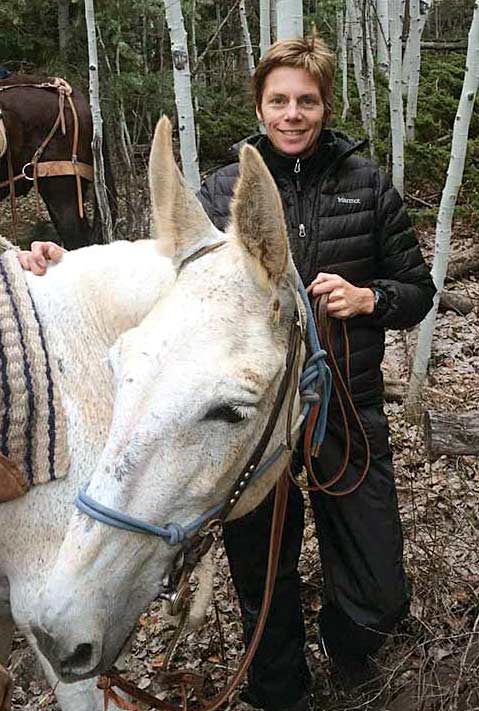 "Atta girl," I said quietly into the cool mountain air. My mule's ears swiveled around. The animal was likely confused by the strange mix of disappointment and respect emanating from his rider. After all, we'd come all this way, ridden and hiked for hours to catch this cat and we'd missed her.

To me, however, that is the essence of working with lions: it's humbling at times. It's not supposed to be easy when dealing with one of the most secretive large carnivores on the continent. Mountain lions are distributed from Canada to South America and one reason for that success is the ability to be invisible. When conditions are right, cats can cease to be flesh-and-blood animals and become an ethereal, ghosting presence on the land.

That was no small feat in this case: This female lion successfully bested a group with combined 75 years of wildlife experience in addition to dogs, mules and a telemetry receiver. She showed us that no matter how powerful the dogs' sense of smell, no matter how experienced the tracker, no matter the technology, this was her home ground. With her quiet defiance, she demonstrated unequivocally that we were but temporary interlopers in her realm. We had all the advantages but she won the game that day, fair and square.

And I wouldn't have it any other way.

This was the last time I got to work with Clint. He was a woodsman through and through, an unpretentious expert in the ways of Utah's wildlife. Clint was one of the best houndsmen and cat handlers in the western US, guiding hunters and academic researchers for decades. The southern Utah landscape, the people of the state and the DWR lost a loyal and steadfast friend when Clint passed after a battle with cancer. He will be missed.