It's probably been done somewhere, but not in northern Utah. Until now.

FIRST, A WORD OR TWO about fish stocking. Fish are most often hauled on a truck fitted with one or more large holding tanks. The driver of a stocking truck typically pulls up to a lake or stream, attaches a pipe to the tank outlet, opens a chute, and the fish slide directly into the water.

But what about waters that aren't right next to a road?

That gets a little trickier.

Back in the early days of “off-road” fish stocking, horses were loaded with metal milk cans filled with water and fish, and then packed to remote areas. 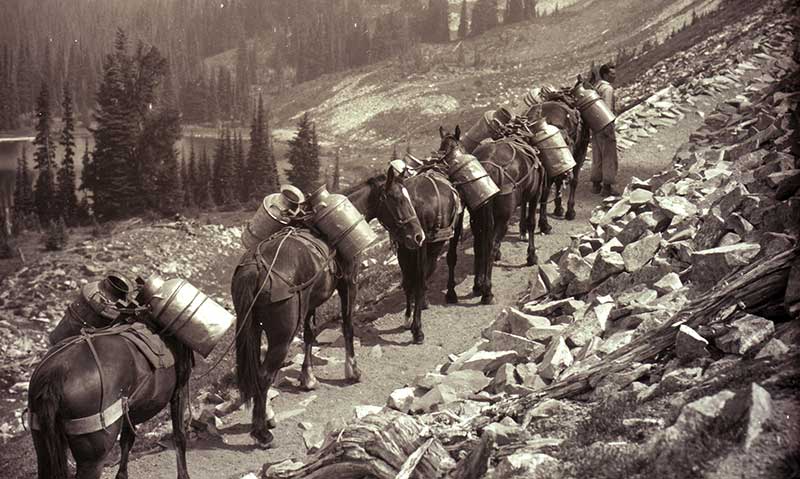 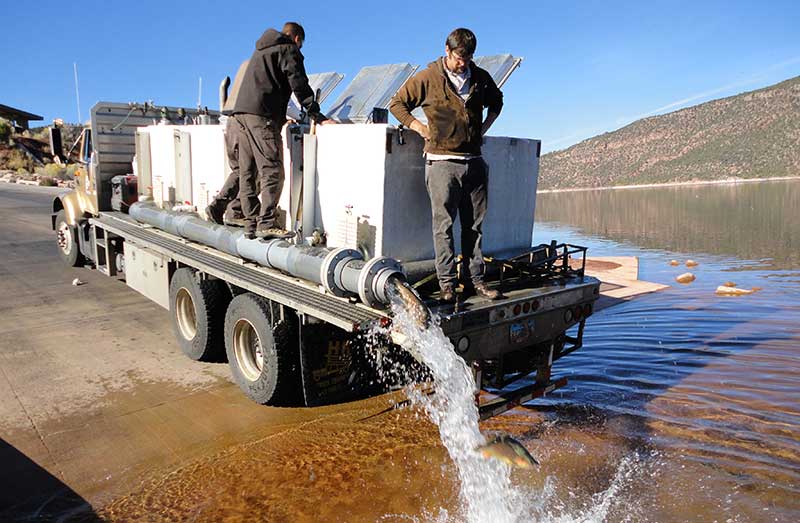 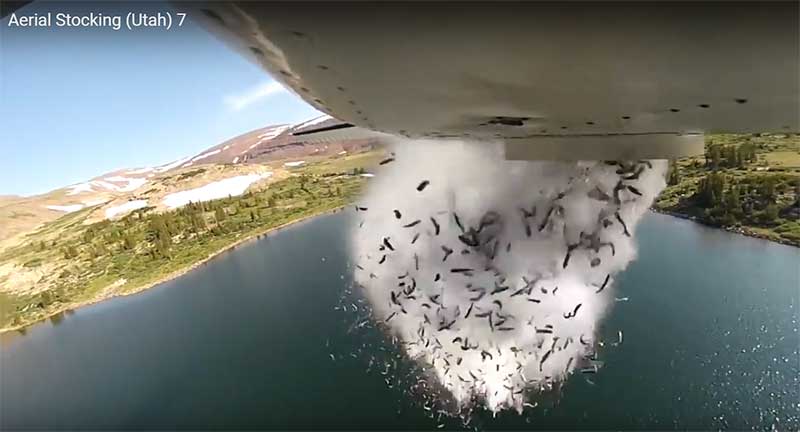 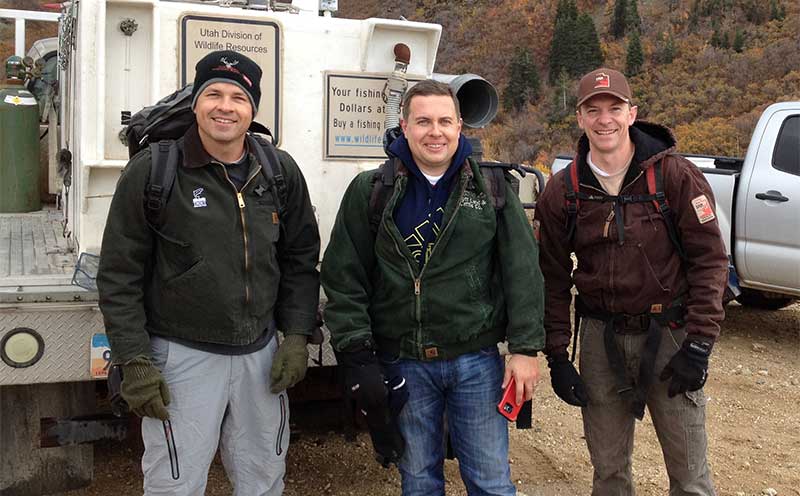 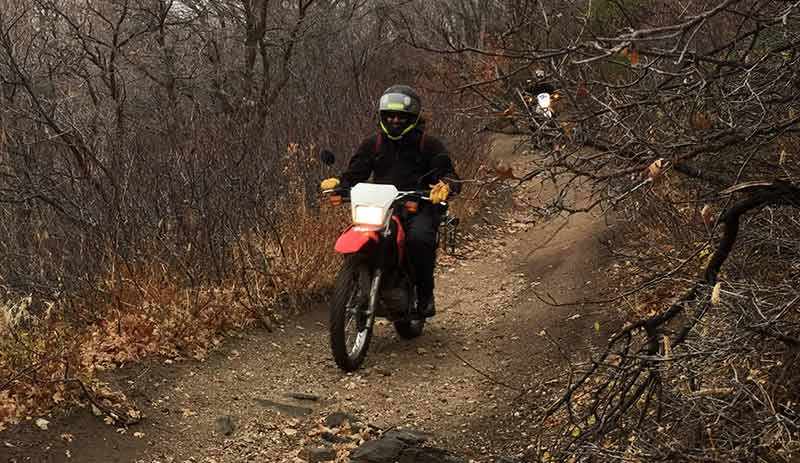 By the 1950s, small airplanes became the preferred method for stocking fish into backcountry lakes, which is actually still the case today. Depending on the area and the condition of roads or trails, fish are also transported to remote areas on foot with buckets or a backpack, or by four-wheeler. Horses are still used at times to get fish into hard-to-reach places. Recently, in northern Utah a particular situation required a little creativity to take fish to a remote section of a small stream on the Wasatch Front.

I stocked this particular stream in 2015 by putting water and fish into a backpack lined with a heavy duty trash bag, and then I hiked as far up the canyon as I could go from the bottom before releasing the fish into the stream.

Actually, there were three of those makeshift "stocking tanks" — one for me and one for each of my two volunteer helpers. The canyon was steep and difficult to hike, and we weren't able to get as far upstream as I had hoped, and therefore weren't able to spread the fish as far as I wanted. Back at the office, as I transferred the stocking waypoints from my GPS to Google Earth, I could see there were a few more miles of stream between our uppermost stocking point and the spring source.

With the difficulty of the hike fresh on my mind, I began looking for a way into the upper end of the drainage. On the satellite image I could see a faint road or trail leaving the main road fairly high up the mountain that appeared to wind its way down into the canyon bottom. I then checked a national forest map and found that what I could see was a trail open to hiking, mountain biking, and motorized vehicles less than 50 inches wide. Perfect! I could take an ATV down there!

The next question was whether the habitat in that part of the stream was adequate for trout, mostly the amount of water. So the following summer I picked a day and hauled an ATV to the nearby parking area and started down the trail.

The first couple of miles weren't too bad, a few rocky areas here and there, but nothing too difficult. Then I came to a part of the trail that had a fairly large rut right down the middle, but the trail was wide enough to stay to one side, so no problem. A little farther down I encountered three guys hiking in the opposite direction as me, we all just waved courteously and kept going. Before long I came to more rutted portions, but there were problems: the trail had narrowed, the ruts were wider and there was no longer room to ride next to the ruts, so I had to ride over them, the wheels straddling the ruts.

The ruts were also deeper, and sliding down into one might have meant getting the ATV stuck. So I took it slow through those sections.

Finally, I made it to the canyon bottom, scouted the stream (which, by the way, seemed fine for stocking trout), and then started the ride out. I actually tried to go out another way (the trail makes a loop back to the main road but comes out higher up the mountain). It quickly became apparent, when I encountered a large bedrock shelf a short distance up the trail, that the route I came down was actually better than the one I was trying to go up, so I turned the machine around and went out the way I came, the whole time thinking there was NO WAY I would take an ATV down there again!

Near the top of the trail I caught up with the three hikers. This time I stopped to talk and learned that they worked for the agencies responsible for maintaining the trail, and they were evaluating its condition so they could make a plan for future improvements. When I asked why they hadn't warned me about the poor condition of the trail, they responded that it looked like I was really enjoying my ride, but they also indicated they were surprised that somebody was taking an ATV down that trail!

Then one of them commented that the only people riding the trail anymore were part of a group of serious motocross enthusiasts. I think "extreme motocross" were his exact words. I'd been feeling somewhat cowardly, but that last comment validated my decision to never again ride that trail on ATV, at least not until they fixed the trail!

So, then I had to figure out exactly how to get the fish down to the stream. I asked a few co-workers with horses whether they would be able to help, but none of them had time during that part of the year (fall is hunting season here in Utah, and they're wildlife officers, biologists, and/or hunters themselves). The comment about motocross kept replaying in my mind, and just when I was about to start looking for the people who actually ride that trail, I realized that two fellow fish biologists, right here in my office, have dirt bikes.

The rest, as they say, is history.

So, I recruited them to try a new stocking method, and on a cold, rainy, fall day, we loaded a couple backpacks with fish and water and sent them down the trail.

They got the fish down to the stream and had fun doing it, despite the treachery of a slick trail and its deep ruts (which actually caused a couple minor incidents), in a way we'd never tried before — dirt bikes! And on that particular trail, I think you can call that "extreme fish stocking!"

Matt McKell is the Northern Region cutthroat biologist for the Division of Wildlife Resources. He enjoys the outdoors, spending time with his family and combining the two as often as possible.