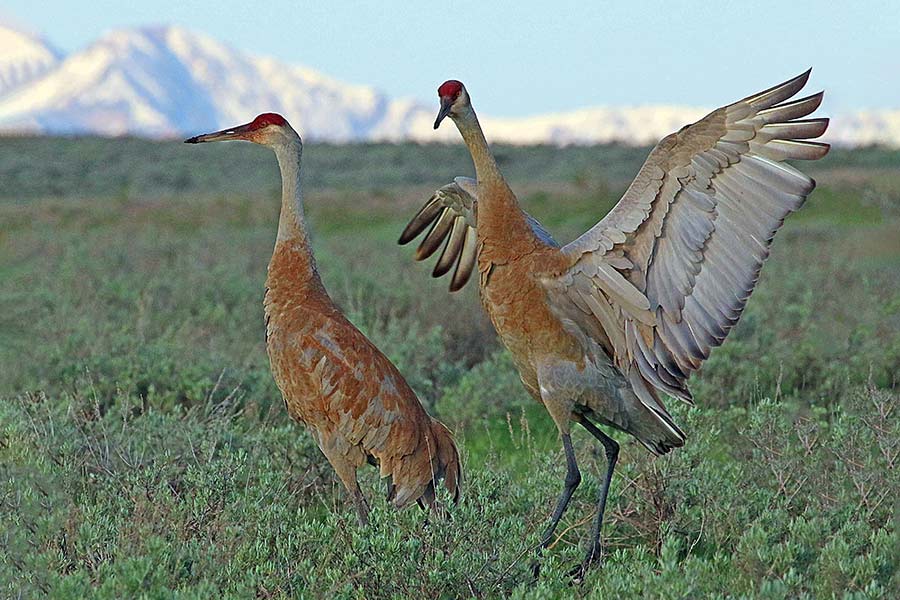 I have lived in Box Elder County for most of my life, and many mornings I wake to the distinctive sound of a sandhill crane. It is hard to put into words how to accurately describe their call: Many people describe it as a bugle, and others call it a drawn-out croak. However, their vocalization is just one of the many features that make sandhill cranes one of the coolest birds on the planet.

If you have ever thought sandhill cranes resemble a cross between a bird and a dinosaur, then you are kind of right!

These large, prehistoric-looking birds are one of the oldest bird species on Earth. Fossil records of cranes have been found across North America dating back millions of years. Cranes have evolved very little from their original ancestors, which is why some of their traits are so uncharacteristic of other bird species. They have an extremely long neck and legs, large wings, and a very long and pointy beak.

Despite these striking physical features, what makes cranes even more unique are their behaviors. Cranes have elaborate courtship displays which involve spreading their wings, bobbing their heads, bowing, hopping and loudly calling. Viewing their dance is a remarkable sight!

Sandhill cranes are elegant, long-lived, form life-long pair bonds and can sustain flight at 20,000 feet. We are truly fortunate to have them in our state.

Sandhill cranes on the move 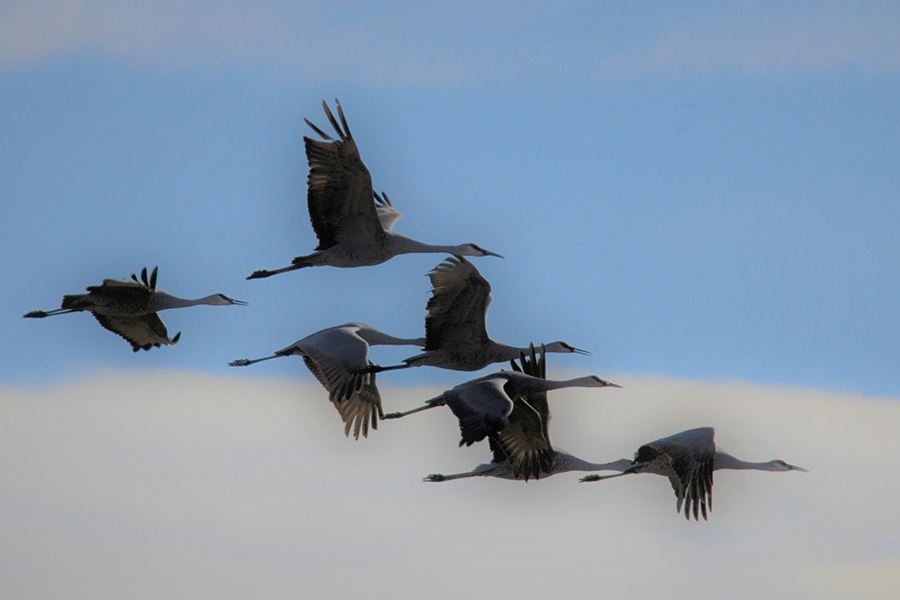 Most sandhill cranes breed in Montana, Wyoming, Idaho and Utah. Each fall, cranes begin a migration that takes them to New Mexico and Arizona where they spend the winter.

Utah is an important state for sandhill cranes' breeding and migration. Over a thousand sandhill cranes nest in Utah each year, and tens of thousands migrate through Utah each fall and spring on their way to their winter and breeding grounds. Box Elder, Cache and Rich counties have established habitat areas for breeding cranes. The Uintah Basin, as well as Sanpete and Sevier counties, are crucial stopover points during migration.

In the early 1980s, biologists sought to determine where cranes in Utah migrated. Both the RM and LCRV cranes looked very similar, so the determination in population was based on where cranes spend the winter.

Biologists tagged cranes with colorful markings on their legs and were able to conclude that most cranes in the western half of Utah were the LCRV population, which spend the winter along the Colorado River in western Arizona and California. Cranes in the eastern half of Utah were part of the RM population, which winter in the Middle Rio Grande Valley in New Mexico and southeastern Arizona.

This initial process of sorting RM and LCRV populations stood until recently, when more cranes started breeding in the center of Utah. Biologists were unsure about what population of cranes this central breeding group belonged to, so we began a study to determine where these birds were migrating. 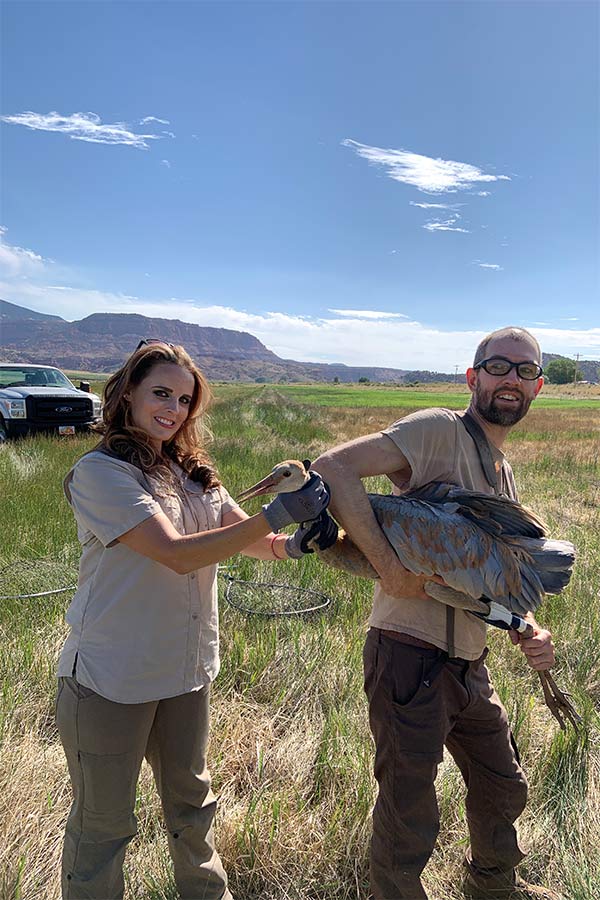 How we track cranes in real time

Rather than having to rely on colorful markers as they did in the 80s, biologists can now utilize GPS technology, which provides exact locations of movements, and a better picture of overall crane migrations. Working with public and private partners all over the west, the Utah Wildlife Migration Initiative consolidates tracking data for a number of wildlife and fish species so we can understand more about animal movement and behaviors, and identify barriers to safe wildlife migration.

So, how do we capture the cranes to fit them with the GPS devices? Sandhill cranes roost each night in areas with shallow wetlands and wet meadows. Cranes fly from their roost locations to feeding sites each morning and evening. Once a roost location is identified, biologists come back at night and capture the birds using spotlights and fishing nets. Biologists fit the crane with a metal leg band and small GPS device to track their movements.

In 2019 and 2020, we were able to capture and track nine different cranes from central Utah. These nine cranes have taught us a lot more about crane movements than we originally knew. Some of the cranes move thousands of miles between their breeding and wintering locations, while others spend most of their time in the same county year round.

One of the coolest things is seeing how far and fast cranes move. One crane left Henrieville, Utah around 5:30 p.m. on Dec. 31, 2021. It arrived in Socorro, New Mexico about 24 hours later, which is a direct route of about 380 miles. On its way back north, it left Aranaipa Valley, Arizona on Feb. 19 at 6:30 p.m., and arrived in Green River, Utah about 48 hours later, only stopping twice to rest. That was a total distance of 460 miles. During periods of its journey, this crane achieved sustained flight speeds around 35–38 miles per hour!

Biologists are using this data to better manage cranes both in Utah and across the western United States. This information is leading to broader conversations about existing crane populations, and could potentially lead to combining the RM and LCRV populations into one larger migratory population for the purposes of studying crane movement in the region. This information is also allowing us to identify important habitats for preservation or rehabilitation, and to protect roosting and stopover locations that are critical to cranes throughout the year. 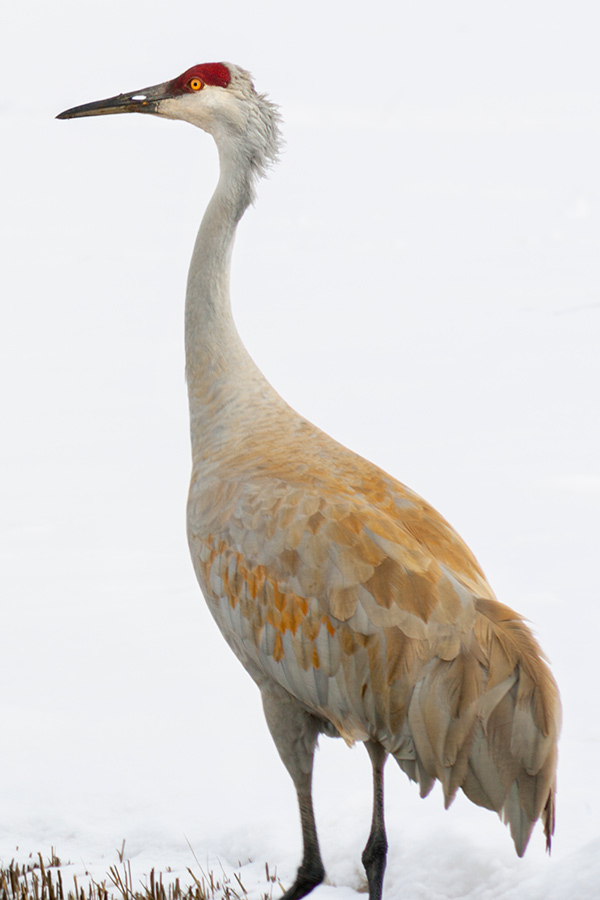 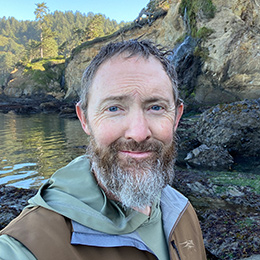 Blair is the DWR's Wildlife Migration Initiative program coordinator. He oversees the movement data of many wildlife species in Utah, and uses the data to improve wildlife migration. In his free time, Blair enjoys hunting, camping and spending time with his family.