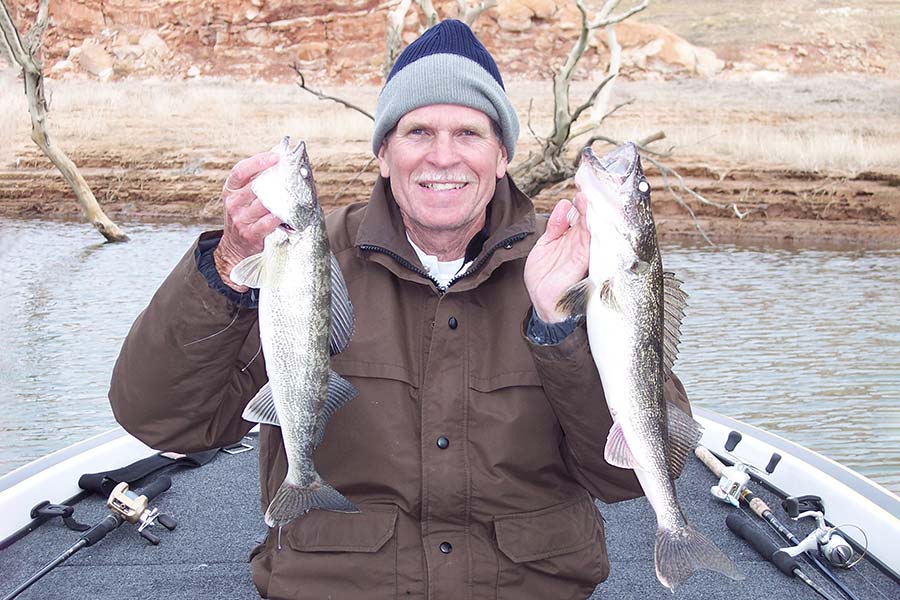 Lake Powell is a popular spot for boating and fishing located in the Glen Canyon National Recreation Area. It is the second largest reservoir in the United States and welcomes more than 2.5 million visitors each year! Anglers at Lake Powell can catch a wide variety of warmwater fish species, including striped bass, largemouth bass, smallmouth bass, catfish, walleye and bluegill. Here's a glimpse into what's new at Lake Powell this winter. 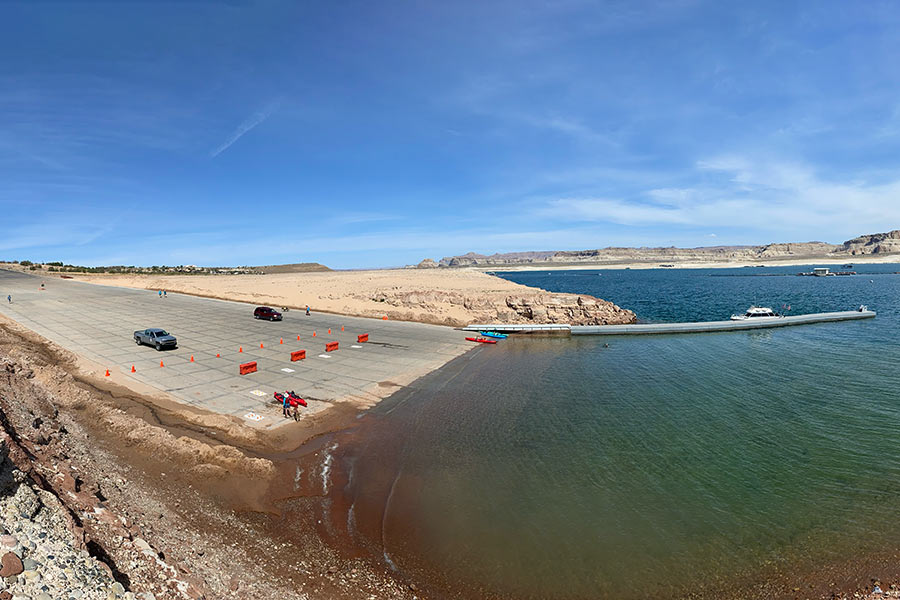 Drought impacts to the fishery

Due to historic drought, Lake Powell dropped to unprecedented low water levels, and Bureau of Reclamation projections indicate it will continue to drop. Declining water levels can impact boater accessibility and the overall health of the fishery.

The lack of a monsoon season in 2020 — and only 29% of normal spring runoff in 2021 — eventually necessitated the closure of many boat ramps. Additionally, low water narrowed popular channels, leading to increased boating congestion.

Due to continued low water levels this winter, several boat ramps will remain closed until further notice, and some ramps may be open for use at your own risk or for launching paddlecraft only. Check on up-to-date National Park Service closures and accessibility by visiting the NPS Glen Canyon alerts website.

DWR biologists conducted an annual survey of the fishery beginning in late October. Sample results of the gillnet survey indicated that Lake Powell's fish populations have remained relatively healthy despite the drought. For more information about current fishing conditions at Lake Powell and other Utah waterbodies, visit our interactive Fish Utah map.

For 45 years, Wayne Gustaveson dedicated his life to Lake Powell. As many readers may know, there are few people who know the lake more intimately than Wayne. Many visitors benefited from Wayne's knowledge through his website, the foremost information platform for all things Lake Powell. 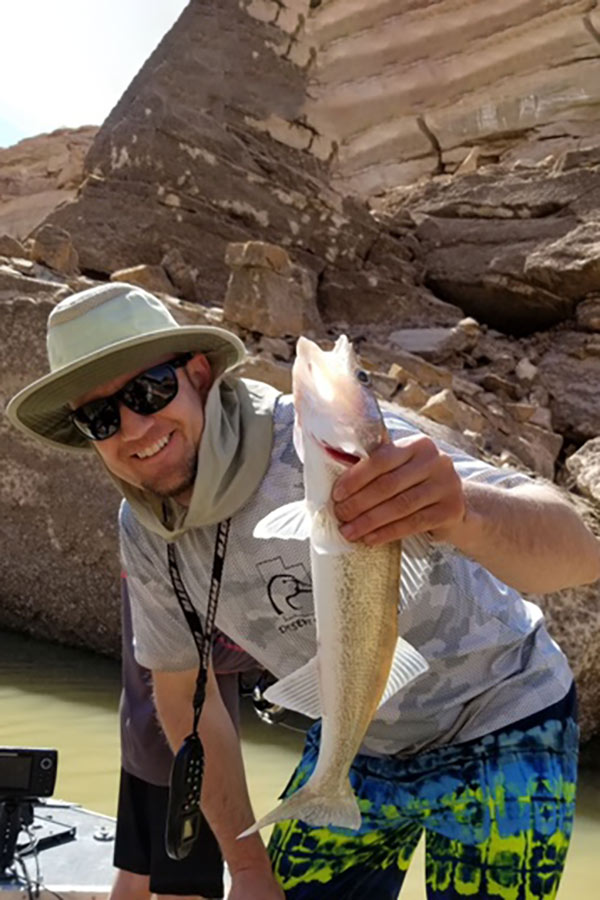 This year, Wayne decided to trade in his work hat for his fishing hat. He has some big shoes to fill, but we're excited to introduce his replacement, DWR Aquatics Biologist Dan Keller.

Dan received a master's degree from Utah State University and has worked for the Division in southeastern Utah for 14 years. In his time with the DWR, Dan has led a variety of fisheries projects, including fish habitat restoration, water management projects to improve river flows, and fish movement and population monitoring in the Colorado River Basin.

He has been exploring Lake Powell since he was a teenager and enjoys the solitude, scenery and the fantastic fishing Lake Powell provides. Dan says, "I have always been impressed with the loyal anglers at Lake Powell who educate themselves about the dynamics of the fishery, and they are always willing to do their part to improve it."

Over the years, Dan has introduced many friends, family, scout troops and others to fishing at Lake Powell. "I'm very humbled and excited to continue efforts to protect and improve the fishery at Lake Powell," he says, and he looks forward to building upon the knowledge accumulated by passionate anglers and renowned biologists.

The mitigation of invasive species — especially the tenacious and destructive quagga mussel — continues to be a concern at Lake Powell. 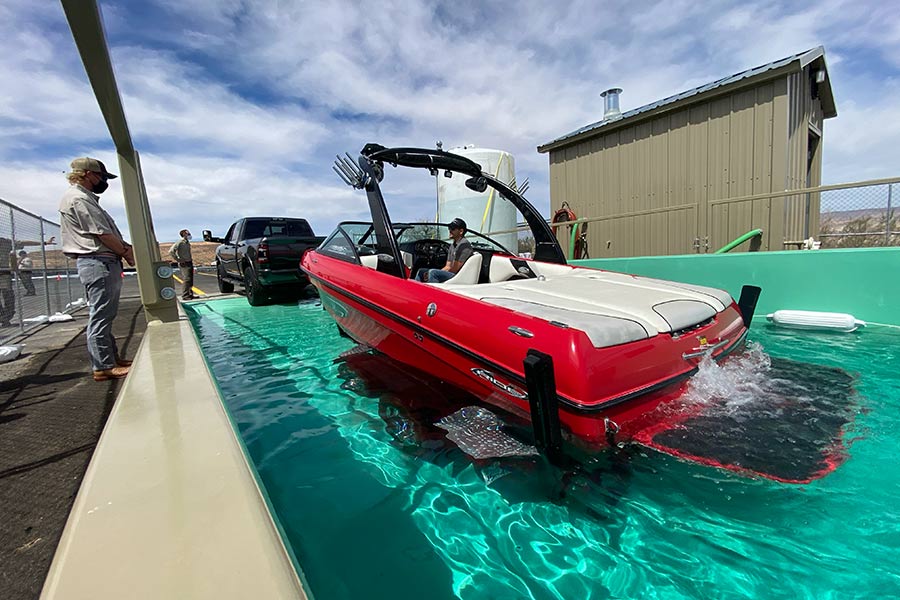 With declining water levels due to continued drought, it becomes even more important for boaters to make sure they are also not dragging mussels or mussel shells into their boats when they are climbing in and out from the shore.

The Division will continue working with the National Park Service and Arizona Game and Fish Department on watercraft inspection operations. All of Lake Powell's partner agencies plan to modify and adapt as launch access may change due to fluctuating water levels.

Fishing forecast for this winter and into spring 2022

DWR Southern Region Aquatic Program Manager Richard Hepworth shared some insights on the fishing forecast for the next few months.

"We anticipate that striper fishing should remain fairly consistent throughout the winter," Hepworth said. "Having a good sonar and knowing how to use it will be key; look for stripers in deeper water 25–80 feet. Spoons and/or heavy jigs will work best. Vertically jig once fish have been located on your sonar."

Younger fish are in the best condition and are abundant lakewide. With low water levels, expect to see larger, older fish in somewhat poor condition. Once water temperatures increase in late February and early March, stripers will start moving to shallow water looking for shad, so casting crankbaits can yield good success.

Walleye and bass fishing slows down during the winter but can pick up and get hot with warm temperatures in the spring. Some of the best walleye fishing can take place during February, as they are preparing to spawn and schooling up. Look for coble points and drop-offs in 15–25 feet of water. Vertical jigging or bottom bouncing a worm harness can be very successful this time of year.

We hope everyone has a fun and safe time recreating at Lake Powell this winter! 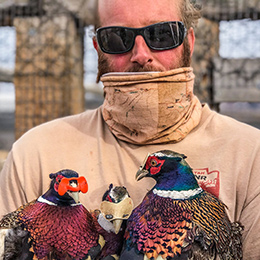 Adam Kavalunas has worked for the Division for 16 years, primarily as the Utah prairie dog recovery biologist. He recently transitioned into a new role as a conservation outreach manager for the DWR Southern Region.