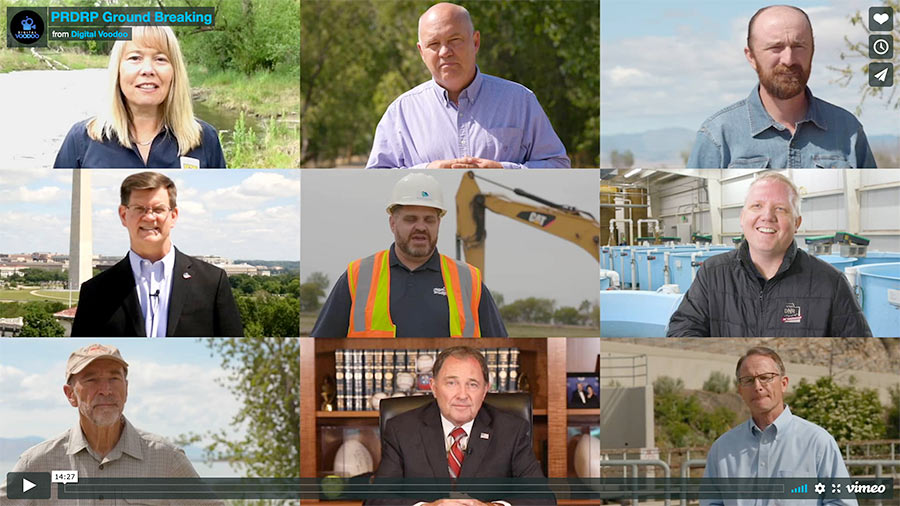 Provo — After more than a decade of planning and coordination, Chris Keleher, Director of Species Recovery at the Utah Department of Natural Resources, climbed aboard an excavator to perform a literal groundbreaking, while other project partners joined him to usher in the construction of the nearly 260-acre Provo River Delta project. The project will restore the interface between the Lower Provo River and Utah Lake as another step in the effort to recover the endangered June sucker.

The project, which is located a half mile north of Utah Lake State Park, will take about five years to complete. Crews will start by excavating a system of braided waterways and wetlands into which the last mile and a half of the Lower Provo River will be diverted. This constructed system will provide the environs for Utah Lake and Provo River flows to meet and mingle. In 2022, the northern half of Skipper Bay dike, which was initially constructed in the 1940s to disconnect land east of it from Utah Lake, will be lowered and most of the Lower Provo River's flow will be diverted north of its current location into a new channel. The Provo River and Utah Lake will once again be interconnected through a delta, providing essential habitat for the survival of the June sucker.

"The purpose for recreating the Provo River Delta is to help create habitat for adult June sucker to spawn and for young June sucker to find safety and avoid predators," said Mike Mills, June Sucker Recovery Implementation Program Local Coordinator. "The Provo River Delta project is the largest and most ambitious habitat restoration project of the June Sucker Recovery Implementation Program, and it moves us even closer toward recovering the June sucker." 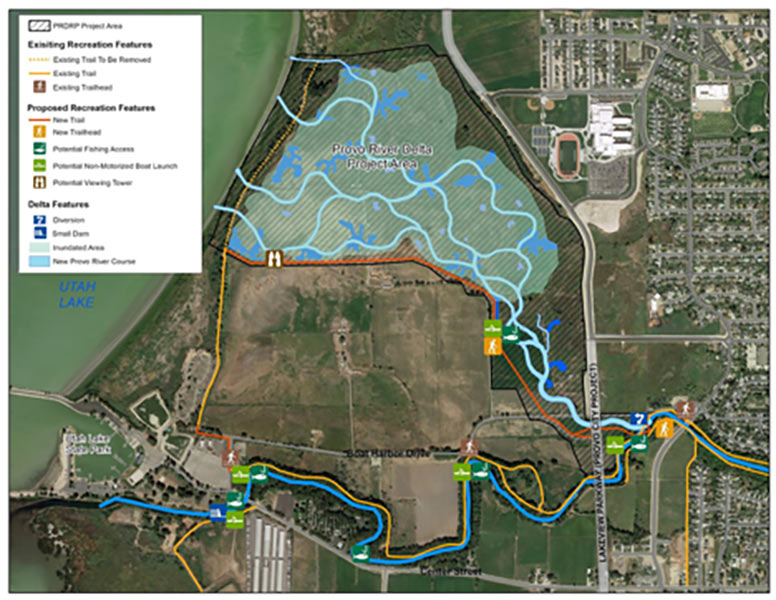 The June sucker is a fish species native to Utah Lake and is not found naturally anywhere else in the world. The Provo River is the main spawning site for the June sucker. When completed, the restored delta will provide the habitat conditions essential to the survival of young June sucker. Due to the incredible partnerships and collaborative efforts of the June Sucker Recovery Implementation Program, the U.S. Fish and Wildlife Service proposed to downlist the June sucker from endangered to threatened in November 2019. The proposed change in status is currently being reviewed by the agency.

"The June sucker is an indicator species, which means that when the June sucker is not doing well, the ecosystem that it depends upon is also not doing well," said Noreen Walsh, U.S. Fish and Wildlife Service Regional Director. "It also means when fish are doing well, the ecosystem supporting them is performing and functioning as it should. That's good for fish and for people! The Provo River Delta project is a major step in the right direction, and this continued work will help us achieve our ultimate goal to recover this amazing species."

Moreover, the current river channel will continue to receive a portion of Provo River flow and a small dam will be constructed downstream of the Provo Center Street bridge. The dam will maintain a relatively constant water elevation year-round. An aeration system will be installed to improve water quality and aesthetics. Streamside access to this channel will be made easier and safer. These features are currently scheduled to be constructed in 2023–2024. Bird monitoring and mosquito and weed control are ongoing project elements. All project features are expected to be complete in 2024.

"I am excited for project completion because it puts us well on the road to June sucker recovery, as well as to embracing and enjoying an impressive wildlife and recreational resource that all partners and the community will be proud of for decades to come," said Brad Barber, Chair of the Utah Reclamation Mitigation & Conservation Commission. "Eventually we will be transitioning ownership and management of the delta to state and local entities so it can be managed for the community's long-term benefit."

The local community will benefit from enhanced outdoor recreation opportunities and protected open space, and all Utahns will benefit because the project helps ensure important water delivery projects linked to June sucker recovery stay on track.

"This project will help restore what was once here and the value it has while at the same time ensuring important water projects continue to provide much needed water to our growing population," said Dr. Tim Petty, Assistant Secretary of the Interior for Water and Science. "It provides wildlife habitat, helps deliver water, provides countless recreational opportunities and creates jobs and economic vitality."

"For those of us who grew up in Utah County, Utah Lake has a special place in our hearts," said Gov. Gary R. Herbert. "With wise stewardship, Utah Lake can be a great resource for many generations. The Provo River Delta will not only improve the area's ecosystem and create important habitat for the June Sucker, but it will also provide more recreational opportunities for the public."

"Once a species gets to the point that it's endangered, it takes a huge effort, a lot of time, public support and a lot of funding to get them back in shape," Keleher said. "We've been fortunate to have partners who have supported this effort, and we are excited that the June sucker has been proposed for downlisting from endangered to threatened. Partnerships are the key to conservation effectiveness, and we are thrilled about how this project will continue to help this species on its road to recovery."

While it's hard to pinpoint an exact cause for the decline of the June sucker, water flow alterations and drought, habitat changes, and competition with and being preyed on by exotic fish species were all contributing factors. At one point, the June sucker population dropped to fewer than 1,000 fish with fewer than 300 spawning individuals, and they were placed on the endangered species list in 1986. 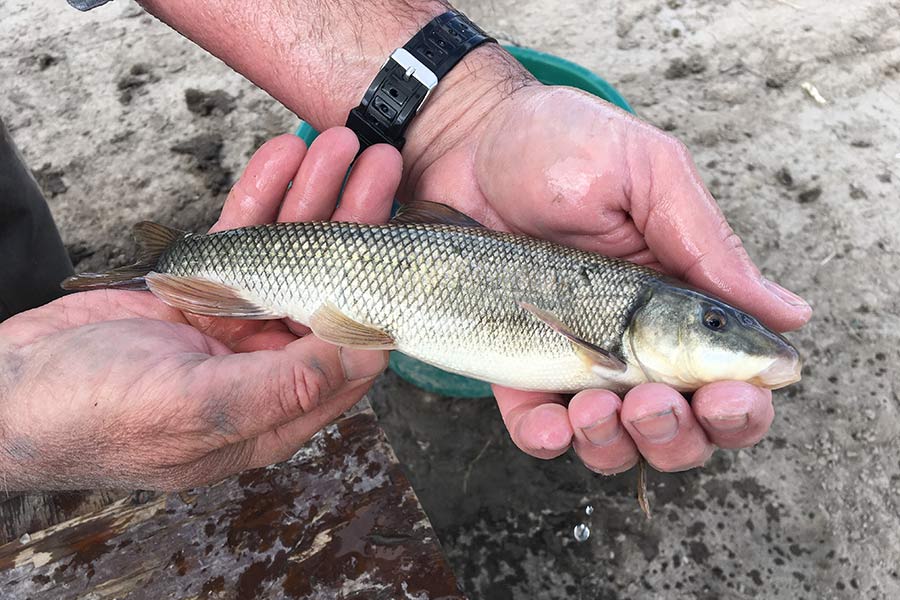 However, in 2002, several local and federal agencies partnered to work to restore June sucker populations, and now the spawning population is estimated at as many as 3,500 fish. Along with addressing streamflows in two tributaries to the lake, the partnership also worked to establish a June sucker hatchery and culture program at the Utah Division of Wildlife Resources Fish Hatchery in Logan. A special water-recirculation facility is used there to quickly grow the fish in warmer water. Then once they are big enough, the fish are restocked into Utah Lake to help the population grow.

"The challenge we found is that the existing Provo River is channeled and diked, which makes the water stagnant, cold and unproductive for larval fish trying to drift to the lake from where June sucker spawn in the river. This leaves the majority of them to starve or be eaten by predators," said Utah Department of Natural Resources Executive Director Brian Steed. "The Provo River Delta project will unblock this bottleneck. It will provide the needed habitat for June sucker to spawn and get young fish back to Utah Lake, and serve as the backbone of future efforts to remove the June sucker from the Endangered Species List."