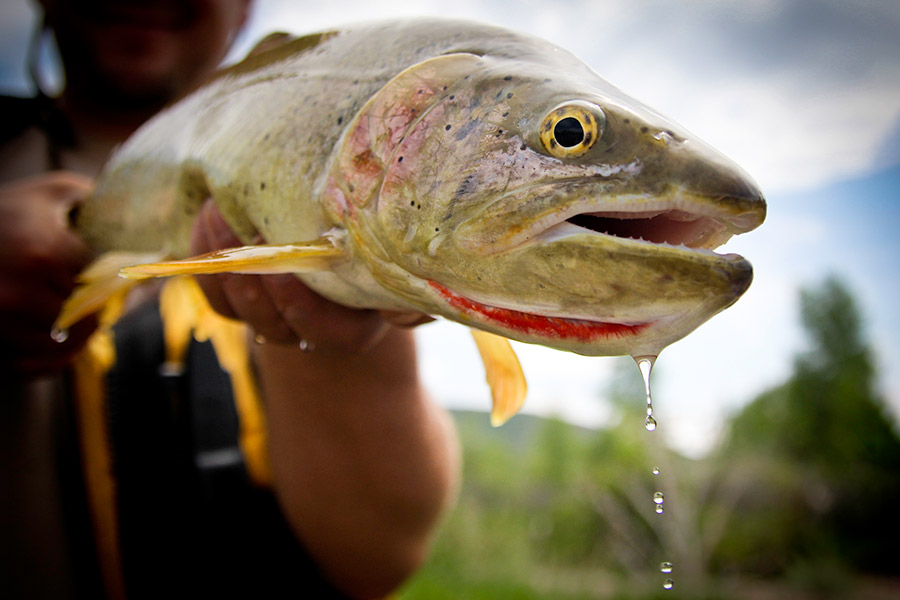 Salt Lake City — While many events are still canceled due to COVID-19, fly fishing is a great recreational opportunity that offers a fun way to enjoy Utah's outdoors, and June is an ideal time of year for it.

Utah fly fishing is great in June because the spring runoff typically subsides this month, making it safer and easier to wade the streams. Cutthroat trout also typically spawn during the peak of the runoff and are especially hungry after spawning.

"That works out well for anglers because it means the fish are looking for food and are more likely to take a fly, which makes for hot fishing," Utah Division of Wildlife Resources Sportfish Coordinator Randy Oplinger said. "Streams also often hit optimum temperatures during June, which increases the fish's metabolism rates, making it so they need to eat a lot."

Utah is home to some incredible fly fishing destinations. Here are some of the best spots to target cutthroat trout:

"Cutthroat are a lot of fun to fish for because they fight hard and are difficult to catch, giving anglers that added challenge," Oplinger said. "They are Utah's only native trout species, and at one point, there were virtually no cutthroat trout in Utah and they were on the verge of being listed under the Endangered Species Act. We've worked hard to restore cutthroat trout in their native ranges throughout the state because they are an important part of the natural ecosystem in Utah."

As its name suggests, the Logan River can be found near the city of Logan, along Highway 89 in Logan Canyon. This area has one of the highest cutthroat trout densities documented in Utah, and offers Bear River cutthroat, as well as brown trout and mountain whitefish.

While spring runoff typically subsides in mid-June, if you go fly fishing early in the month, you should be cautious — don't wade into a river unless you are sure it's safe to do so. Rivers are often running swifter than they appear.

"It is always a good idea to fish with someone else and to have the right equipment to help keep you safe," Oplinger said. "Good wading boots can give you better grip and prevent you from slipping. Make sure to use good judgment before entering any flowing water."

Streams in the Uinta Mountains

There are several rivers and streams in the Uinta Mountains that offer great Colorado River cutthroat trout fishing. Some options on the North Slope of the Uintas include:

You can also find brook trout in some of these rivers and streams.

The Utah Cutthroat Slam launched in 2016 and provides a fun challenge and a great way to get outdoors. The goal of the Slam is for anglers to catch each of the four native Utah cutthroat trout — Bonneville, Colorado River, Bear River and Yellowstone — in their historic ranges. Registration costs $20 for adults and $10 for youth, and you can register on the DWR website. All but $1 of the registration cost is dedicated to conservation projects that help Utah's native cutthroat trout, and to date, participating anglers have raised more than $42,000. Those conservation projects have helped improve cutthroat trout habitat throughout Utah, and the funding has also been used to educate the public about the fish species.

Fly fishing is fun for anglers because it can add an extra challenge and more nuanced techniques. A big key to being successful when fly fishing is to be aware of the insects around you and the feeding patterns of the fish.

"Fish typically feed on the insect that is most abundant and are reluctant to take a fly that doesn't match what they are seeing in the water," Oplinger said. "If you see a lot of insects flying around, and the fish are feeding on the surface, then you should fish a dry fly (which floats on the surface and mimics winged aquatic insects) that matches what is flying around."

When fish are feeding beneath the surface, you will want to match the hatch in the water. That can be more difficult to identify though, so a good tip is to flip over rocks in the stream and examine the insects on the rocks. Then, try to match your wet fly (which is used under the surface to mimic aquatic insects that haven't emerged from the stream yet) to whatever seems most abundant on the rocks.

"Another key tip is that it is important to present your fly to the fish in a manner that looks natural," Oplinger said. "Fish notice things like flies that are moving faster or slower than the rest of the current and they won't take your fly if it isn't naturally presented. You can pick the right fly, but still have no luck simply because your presentation isn't natural looking."

While several COVID-19-related restrictions have recently been lifted, Utahns are still encouraged to practice social distancing while outdoors and should remain at least 6 feet away from others who may be fishing at the same waterbody. If a waterbody looks crowded and social distancing will be difficult to maintain, you should try visiting a different waterbody. You should also stay home if you are feeling sick.

"Fly fishing is probably one of the better ways to fish while social distancing," Oplinger said. "Fly anglers tend to seek out fairly large patches of water to fish, so inherently there is good separation between anglers. Fly fishing is a great way to experience solitude while enjoying the outdoors."

While fishing, you should also remember to pack out what you pack in and keep the area free of trash. Also note that some facilities, like restrooms or campgrounds, may be closed due to COVID-19 — please respect those closures. Visit the Utah State Parks website for more tips on recreating responsibly.