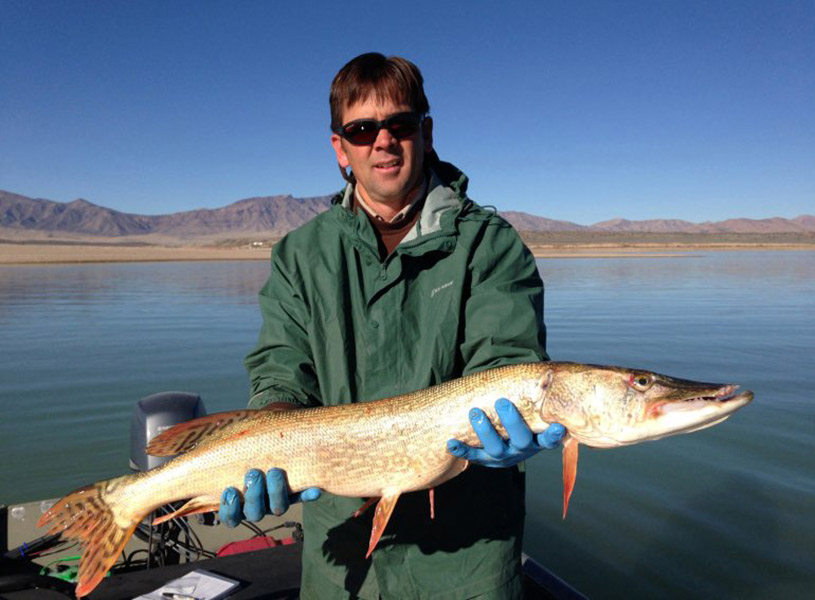 Salt Lake City — After northern pike were placed in Utah Lake illegally, the Utah Division of Wildlife Resources has been asking anglers to catch and kill the invasive predators. But now there is one exception: Anglers who catch a northern pike with a red tag should report it to the DWR and then let the fish go.

DWR biologists will begin tagging some of the northern pike in Utah Lake and its tributaries on Feb. 11, as part of a study to learn more about the seasonal locations and movements of juvenile and adult pike in Utah Lake, the Provo River and Hobble Creek. The study will last for at least five years.

Biologists will continue tagging fish for about six weeks, and hope to tag at least 50 fish that are 12 inches or longer. The tags are thin, red pieces of plastic attached to the fish, and indicate that transmitters have also been implanted in the fish so biologists can track them with GPS technology.

"We are asking anglers to release pike with these tags because the transmitters will enable us to track their movements, which will help us develop a control program in the future," Keith Lawrence, DWR central region native aquatics biologist, said. "As in the past, if anglers catch a pike without one of these tags, they are still required to remove the fish from the water and kill it. In that case, we request that they either bring the fish to the DWR office in Springville, if possible, or that they freeze it and call the DWR so that arrangements can be made to pick up the fish. If a tagged pike inadvertently dies, we would still like to recover the fish so that the transmitter can be reused."

If you catch a tagged northern pike in Utah Lake or one of its tributaries, please do the following:

Northern pike were illegally introduced to Utah Lake around 2010. Due to their ability to rapidly reproduce and their predatory nature, DWR biologists are worried about the effect the pike will have on other fish species, including the June suckers — an endangered fish species only found in Utah Lake.

"Northern pike can do great harm both to the endangered June sucker and to some of the sportfish species in Utah Lake," Lawrence said. "For that reason, we are asking anglers to assist us when they catch these fish, notifying us when they catch a tagged one, and if possible, providing untagged fish to us for analysis. That information will be extremely helpful toward our efforts to document their impact and control their spread."