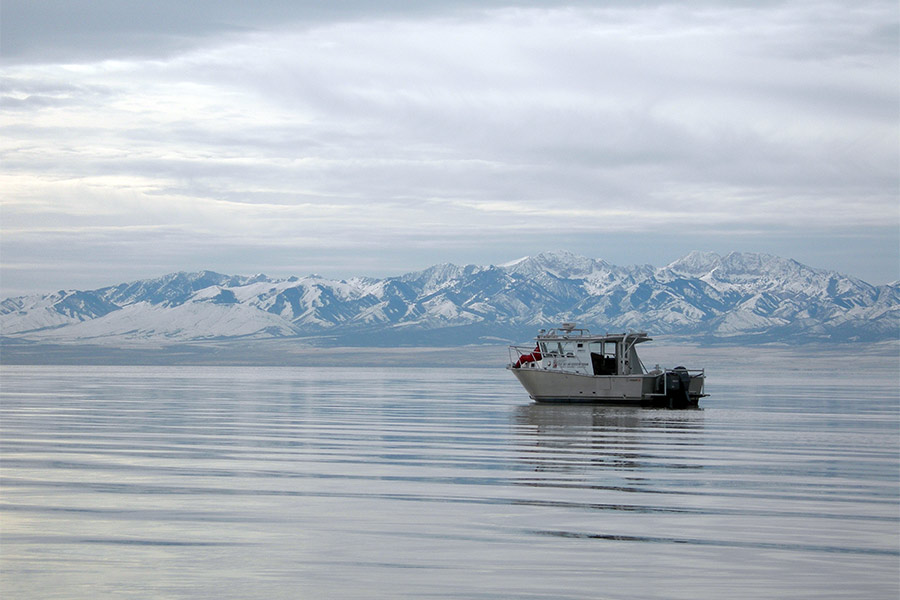 Salt Lake City — The Great Salt Lake is known for its incredibly high salinity levels that allow people to float, but many may not be aware of its multi-million dollar brine shrimp industry and how the Utah Division of Wildlife Resources manages it to help balance a unique ecosystem.

Brine shrimp are small crustaceans that inhabit salty waters around the world, both inland and on the coast. Ranging from ⅓ of an inch to a ½ inch, these shrimp are much smaller than the ones you eat.

The brine shrimp produce eggs (called cysts), which are harvested and used as food for fish and commercially grown shrimp. The brine shrimp season begins Oct. 1 and typically runs until Jan. 31 each year, except when the dates are extended or shortened for management purposes. This past season, more than 44 million raw pounds of brine shrimp cysts were harvested at the Great Salt Lake, making it the highest number of raw pounds to ever be harvested in one season. Not all of the poundage is marketable, however, as the raw pound totals include small amounts of sand and bird feathers, so it isn’t all sellable cysts. The average for the past decade has been an annual harvest of 25 million to 35 million raw pounds.

Due to the high demand for brine shrimp cysts and because of overharvesting by other commercial fisheries in other areas of the world, the DWR began managing the harvest on the Great Salt Lake in 1994. By taking an active management role, the DWR could closely regulate and monitor cyst collection so it remained sustainable.

"The companies that harvest the brine shrimp actually asked for the regulation, and have always been very compliant and responsible in making sure this valuable resource and the unique Great Salt Lake ecosystem remain in balance," Great Salt Lake Ecosystem Program Manager John Luft said. "We greatly appreciate their cooperation and their role in helping us manage the delicate balance in this important habitat. This is one of the most successful examples of cooperation between industry and conservation."

Each week during the harvest season, DWR biologists go out on the Great Salt Lake and pull nets at varying depths from 17 different areas to assess brine shrimp populations throughout the lake. Those samples are taken to a research lab, where the biologists count how many brine shrimp there are in each water sample, and also note the life stages of the shrimp. That helps the biologists monitor ongoing population levels so that too many cysts aren't harvested from the lake.

"It's a tricky balance because the adult shrimp typically freeze and die each December, while the cysts will survive and hatch in March," Luft said. "When the cysts hatch, they survive by eating the algae in the lake, which is also what the juvenile and adult brine shrimp eat. However, if there are too many cysts that hatch, they eat all the algae and run out of food before they reach adulthood, which is when they produce more cysts. So we have to manage the harvest to fit that balance, which is about 21 cysts per liter of water. Once it reaches that threshold, we either close the harvest for the year or we extend it if enough cysts haven't been harvested. You can overharvest them, but you can also underharvest them, which is why it's a delicate balance that requires a lot of monitoring."

DWR conservation officers patrol the lake by boat during the season to check permits and harvest totals of the companies gathering brine shrimp cysts. DWR officials also fly a plane over the Great Salt Lake a few times a week during the season to locate where the brine shrimp are and to do aerial patrols. The cysts collect together in the water and look like large, gold-colored oil slicks.

"That allows us to easily document where the harvest is happening on the lake, and also to research where the birds are located on the lake in relation to the cysts," Luft said. "We do a lot of research on the relationship between the birds and brine shrimp."

The Great Salt Lake and its associated wetlands provide an invaluable food source to around 10 million migratory birds, including about 330 different species. A variety of these birds feed on the brine shrimp, either exclusively or opportunistically, to fuel their long migrations. The Great Salt Lake gets the largest percentage of the world's population of eared grebes feeding during their migration. Between 3 million and 5 million eared grebes have been documented using the Great Salt Lake as a stopover spot during their migration each year from September to October.

The brine shrimp companies are required to obtain a Certificate of Registration from the DWR in order to harvest the cysts. The COR fees go toward funding research at the Great Salt Lake, and a portion of the royalty tax on the brine shrimp cyst harvest goes toward the endangered species mitigation fund.

"The Great Salt Lake brings in over $1.3 billion annually to the Utah economy," Great Salt Lake State Park Manager Dave Shearer said. "It is one of the most important migratory stops in North America. Keeping the lake healthy is of vital importance to Utah."