Where you should go for hot fishing in November

SALT LAKE CITY — The weather is getting colder, but the fishing is still hot in some areas of Utah. No need to put away the fishing gear just yet — there are still plenty of great fishing opportunities if you know where to go and which species to target. 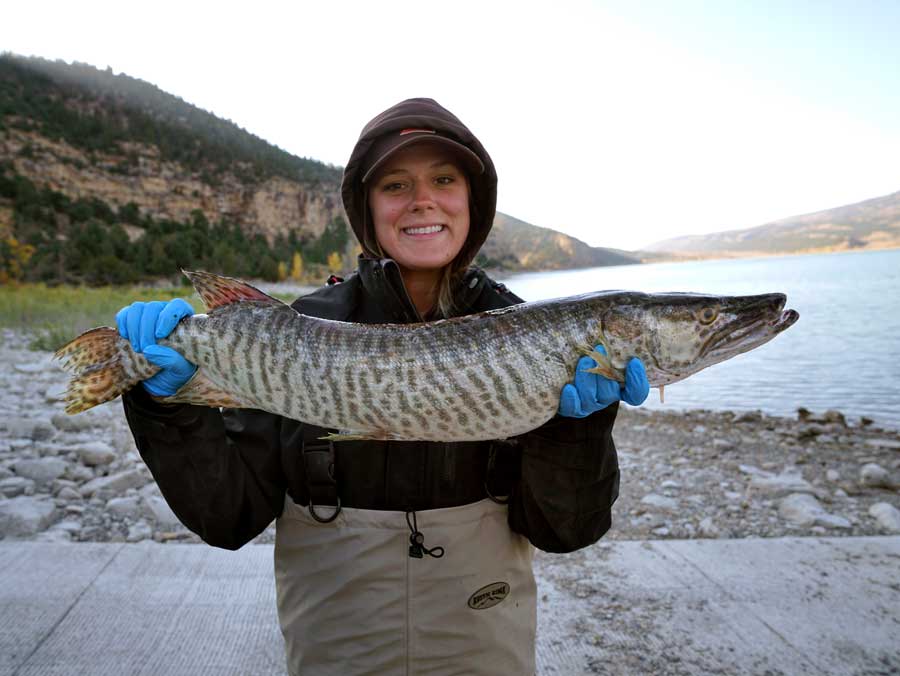 November can be a good month for fishing because it is in the spawning window for brown, brook and lake trout, as well as splake. Fish can be aggressive during the spawn, which makes them more likely to take your bait, lure or fly.

“Also, because the weather is cooling down, not many people think about fishing in November, which means the waters are less crowded than in the summer,” Randy Oplinger, Utah Division of Wildlife Resources sportfish coordinator, said. “Along with potentially having the water to yourself and enjoying a peaceful fishing outing, you can also catch some nice fall scenery if you fish early in the month before all the leaves fall.”

If you are itching to get out on the water, here are some great fishing spots in November.

Located in the Manti-La Sal National Forest in central Utah, Joes Valley Reservoir has several fish species, including cutthroat trout, recently stocked rainbow trout, hard-fighting tiger muskie and splake. Splake are a hybrid of lake trout and brook trout, and despite being sterile, they still go through the motions of spawning. Because November is when splake spawn, it’s a great time to target these fish.

“Joes Valley has one of the better splake populations in the state, and they become active and hungry after spawning,” Oplinger said.

This waterbody also has boat access, which will help you have more success catching the splake, cutthroat trout and tiger muskie. However, rainbow trout can easily be caught from shore, so no worries if you don’t have a boat.

Other waterbodies that also offer great splake fishing this month include Fish Lake, Navajo Lake and Lost Creek Reservoir, which is one of the newest splake fisheries in Utah.

Located near the popular Flaming Gorge Reservoir, the Green River is a renowned fly fishing destination. November is an ideal month to visit, largely because the river is much less crowded. You’ll find large rainbow and brown trout in this waterway. It’s easy to fish from the bank, but using a drift boat may help you have more success.

“There are a lot of fish in the Green River, but the fishing pressure there is high in the summer, making fall an ideal time to go,” Oplinger said. “It is a water where the fish are pretty ‘educated,’ so matching the hatch and having a good fly presentation are important to having success.”

If you live along the Wasatch Front and don’t want to travel all the way to northeastern Utah, the nearby Weber and Provo rivers also offer great fishing for brown trout in November and are not crowded. Both these rivers are smaller than the Green River and are great for anglers who prefer to wade while fishing.

If you are fishing for the splake, cutthroat trout or tiger muskie at Joes Valley, you will likely have the most success using lures like spoons, crankbaits or spinnerbaits. If you are fishing for rainbow trout, you can catch them using conventional baits like PowerBait or worms. As mentioned, the Green River is a traditional fly fishing river, but you may also have success using spoons or spinnerbait lures.

When the temperatures cool down, fish tend to slow down and become less active (because they are cold blooded.) As a result, while you are fishing this month, you may need to slow down your presentation and use smaller flies or lures. Strikes on flies and lures are also less pronounced in cooler weather, so you will need to be extra attentive to notice when a fish is taking your lure.

If you go fishing this month, make sure to dress for the weather. Wear layers in case the weather does happen to warm up, but make sure you have enough clothing and good boots to keep you warm. You may also start to see ice forming on some waterbodies later in the month. However, just because you see ice doesn’t mean that it is safe to walk on. If the ice is less than 4 inches thick, it is not safe. Also remember that ice thickness can vary across a waterbody, so stay in the area where you know the ice is 4 or more inches. Typically, the weather isn’t cold enough for thick ice until January.

So while you may be counting down the days until you can savor that Thanksgiving turkey, consider enjoying some freshly caught fish in the meantime.