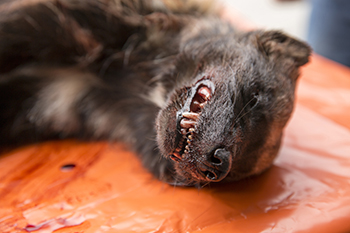 Elusive animal hit by a vehicle near Bear Lake.

LAKETOWN — Even though it was hit and killed by a vehicle, the fact a wolverine was in northern Utah is exciting to staff with the Division of Wildlife Resources.

This wolverine was recently killed by a vehicle in Rich County. In 2014, photos of a wolverine in the Uinta Mountains were captured by biologists using a trail camera.

"This wolverine was not transplanted to Utah," says DWR Director Greg Sheehan. "It made its way here on its own. It's amazing to see the diversity of wildlife we have in Utah expand even more. Particularly, such a charismatic and mythical species as the wolverine."

DWR biologists and officers learned about the wolverine on June 29. That's when an employee with the Utah Department of Transportation called a DWR conservation officer to report finding a dead wolverine that had been hit by a vehicle.

Sheehan says the wolverine was found about one mile west of Laketown, near Bear Lake in Rich County. "It was a young female," he says. "There's no evidence that the wolverine had been reproducing."

A necropsy is being performed on the animal, to learn more about it and confirm the cause of death.

Wolverines — found historically in high mountain areas — are rare in Utah today. The last time a wolverine carcass was found in Utah was in 1979, when a wolverine was illegally shot and killed near the Utah-Colorado border northeast of Vernal.

The most recent confirmed sighting of a wolverine in Utah happened in February 2014, when a wolverine was caught on camera at a camera bait station in the Uinta Mountains.

Leslie McFarlane, mammals coordinator for the DWR, says there have been multiple unconfirmed sightings of wolverines in Utah in recent years.

"We don't know how many wolverines live in Utah," McFarlane says, "or if they're living here at all. They're elusive, have a wide distribution range and can travel long distances. A wolverine's territory can be as large as 350 square miles. They tend to move large distances within that territory."

McFarlane says about 250 to 300 wolverines live in the Northern Rocky Mountains of Montana, Idaho and Wyoming. They're also found in the North Cascades in Washington.

McFarlane says it's likely that the wolverine killed on June 29 was wandering through the state. "To prove that wolverines are established in Utah," she says, "we would have to have multiple sightings over a short period of time and in one particular area."

Wolverines are not currently listed as threatened or endangered under the Endangered Species Act. However, in Utah, they are fully protected by state law.