SALT LAKE CITY —The Utah Division of Wildlife Resources K9 program has been revitalized with the introduction of two newly trained dogs — and they are ready for action.

DWR previously had a K9 police dog program in the early ‘90s but it was discontinued until 2016. Then, it was cut short by a sudden cancer diagnosis and the death of conservation K9, Cody. 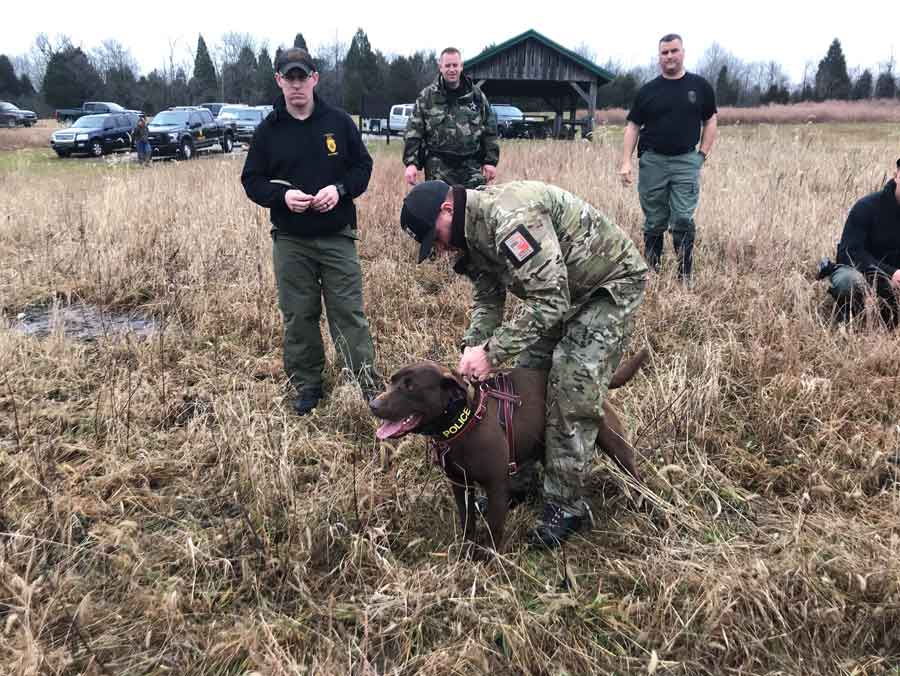 Conservation officers Matt Burgess and his 15-month-old male black Labrador retriever, Cruz, and Josh Carver and his male chocolate Lab, Carlo, recently finished an intensive 9-week training course in Patoka Lake, Indiana. The course was put on by the Indiana Department of Natural Resources and trained the dogs to track people and wildlife, as well as do article searches to find specific items like guns, shotgun shells, cellphones, clothing and keys.

“DWR's dogs are a little different than the traditional police dog,” DWR K9 coordinator Sgt. Chad Bettridge said. “Our dogs are trained, similar to traditional police dogs, to locate and then indicate on specific items. Instead of the typical training to locate drug-related items, our dogs have been trained to find wildlife and wildlife-related items. Our K9s are also tracking dogs and are able to follow the track of wildlife violators, missing children or lost hikers. Both of our K9s successfully completed numerous multi-mile tracks during their training.”

The training was long and intense — for both the dogs and their human counterparts.

“The hardest part of the training was trying to keep up with Cruz while tracking,” Burgess said. “He is young and I am old. He did get me into better shape than I have been in for a long time. It is also difficult to try and learn to think like a dog does, with no verbal communication and no answers to why he does certain things sometimes. But I am looking forward to Cruz having success and building him into an effective dog with a very important role in wildlife law enforcement.”

Carver had previously undergone K9 training with his former dog, Cody. After Cody died, Carver got Cruz and began raising him and working with him. He had Cruz for about 10 months before he got a tip about Carlo needing a home.

“The owner was looking to place him in a law enforcement home. Carlo was high energy and was too much for his current owners to handle, and he was basically in a kennel, day and night. I decided to test Carlo, in hopes of finding him a home. I fell in love with this guy. Something about him just needing a second chance made him more appealing.”

Carver kept Carlo as his partner to help patrol the southern part of the state and Burgess got Cruz for northern Utah.

While the dogs will primarily be used in helping to solve wildlife-related crimes, like trespassing and poaching cases, they will also assist other law enforcement agencies.

“I worked many cases in my career where a K9 would have made a huge difference,” Carver said. “I know that having a K9 is a huge asset to not only our agency and the hunting community, but also other agencies and the general public.”

While the dogs will be very useful in law enforcement work, they are great to be around. Because they are not trained to be “bite dogs,” they are very friendly.

“Our officers take the dogs to school programs and other community functions, and people usually love to be around Labs because of their friendly nature,” Bettridge said. “DWR officers work hard to ensure that the people of Utah have an enjoyable and safe experience while hunting, fishing or experiencing the outdoors. Adding these canines to their efforts will increase the effectiveness of our officers and provide additional support for the agencies we work alongside.”

Another DWR conservation officer and his dog will be attending a K9 training in Utah in July and a fourth officer is slated to attend in 2020.