SALT LAKE CITY — Endangered Species Day is a great opportunity to learn about some local endangered and threatened species and what the Utah Division of Wildlife Resources and other agencies are doing to help them. 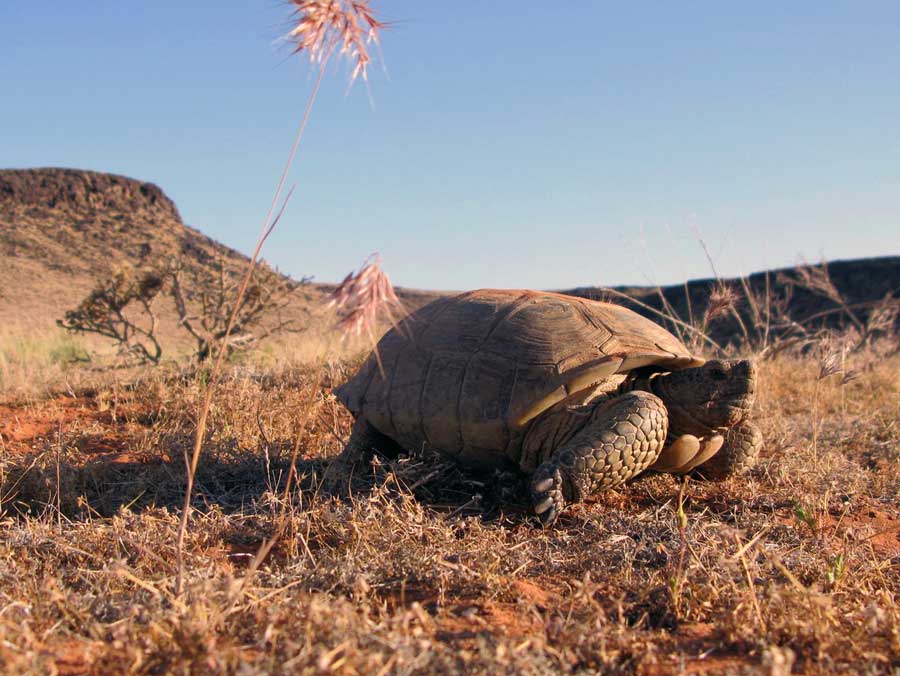 The Mojave desert tortoise, located north and west of the Colorado River in Arizona, Utah, Nevada and California, was listed as threatened in 1990.

The Mojave desert tortoise, located north and west of the Colorado River in Arizona, Utah, Nevada and California, was listed as threatened in 1990.

An endangered species is any species that is at serious risk of extinction in a specific area or throughout all of its natural habitat. A threatened species is any species that is likely to become an endangered species in the foreseeable future throughout much or all of its habitat. A species is classified as sensitive if it is likely to undergo substantial population declines in all or part of its natural region without management intervention.

There are currently 18 wildlife species in Utah listed on the federal endangered species list, with 10 listed as endangered and eight listed as threatened.

Of those, here are three success stories:

The June sucker is a fish species native to Utah Lake and the Provo River and is not found naturally anywhere else in the world. While it’s hard to pinpoint an exact cause for their decline, water flow alterations and drought, habit changes, and competition with and being preyed on by exotic fish species were all contributing factors. The June sucker population dropped to less than 1,000 fish, and they were placed on the endangered species list in 1986.

However, in 2002, the Utah Department of Natural Resources partnered with several agencies to work to restore their populations, and now there are tens of thousands of June suckers. Along with addressing water level issues at Utah Lake and its tributaries, the partnership also worked to establish a June sucker population at the DWR Fisheries Experiment Station in Logan. A special water-circulation facility is used there to quickly grow the fish in warmer water. Then once they are big enough, the fish are restocked into Utah Lake to help the population grow.

“It’s unfortunate that it takes so long to restore wildlife populations,” Chris Keleher, DNR director of recovery programs, said. “Once a species gets to the point that it’s endangered, it takes a huge effort and a lot of funding to get them back in shape. We’ve been fortunate to have partners who supported the effort, and we are getting there with the June sucker. Partnerships are the key to conservation effectiveness, and trust is the glue that holds partnerships together.”

With the threats to the June sucker being addressed through the partnership and with its population increasing in Utah Lake, it is hoped that this species will be considered for downlisting from endangered to threatened in the near future.

California condors were first listed as endangered in 1967, with an estimated total population of 40-50 birds. By 1982, the population had dropped to only 23 birds. Condors are North America’s largest vultures, and due to their size, they require vast areas of wilderness where they have access to the carcasses of large animals.

The biggest factors in their population decline include the consumption of lead due to lead-based ammunition, eating trash and other litter, and changes in their habitat, like an increase in power lines and decrease in nesting areas due to land development.

Several organizations joined efforts to trap and remove the 22 remaining condors from the wild between 1982 and 1987. These birds were used to establish a captive breeding program to build up the condor numbers, and eventually led to re-established wild populations in California, Arizona, Utah and Mexico. Some condors are still kept in captivity in an effort to continue growing the population, and captive-born condors are released back into the wild each year.

“Condors are evolved to be long-lived in some of our harshest habitats,” DWR avian conservation program coordinator Russell Norvell said. “They survive with an efficiency that’s the opposite of ‘live fast, die young,’ an efficiency that’s successful in stable and predictable environments. The flip side is that recovery from such small numbers is hard when even the most experienced adults may successfully breed only once every several years.”

Nest sites are protected by agencies and the birds are hazed away from dangerous areas like power lines and wind turbines. Utah and Arizona are both working with hunters to reduce condor exposure to lead ammunition.

“Utah hunters have been very supportive of our lead ammunition reduction efforts,” DWR wildlife biologist Keith Day said. “They have readily and voluntarily joined in our voluntary non-lead ammunition program.”

The Mojave desert tortoise, located north and west of the Colorado River in Arizona, Utah, Nevada and California, was listed as threatened in 1990. At the time, DWR was monitoring tortoise populations on two plots in southwest Utah. In 1986, biologists determined there was a significant decrease of tortoises on the Beaver Dam Slope, and there were only 8 to 16 tortoises per square mile in the area.

The biggest causes of the population declines were due to changes in their habitat as a result of urbanization.

“The same area where new homes are being built overlaps with areas where tortoises have shelters, forage sites and reproductive areas,” DWR wildlife biologist Ann McLuckie said. “In addition, getting preyed upon by predators and vehicle collisions or illegal removal has also attributed to declines in tortoise populations.”

Desert tortoises require 13 to 20 years until they reach reproductive maturity, and they have low reproductive rates. Once they do reproduce, their offspring have high mortality rates from predators.

“Conservation work is critical to help recover the desert tortoise and protect vulnerable habitat,” McLuckie said. “By working with agency partners to actively protect habitat, tortoise populations can continue to recover across their range.”

Partners who have helped with desert tortoise conservation include DNR, the Bureau of Land Management, the U.S. Fish and Wildlife Service, Snow Canyon State Park, The Nature Conservancy, Washington County Water Conservancy, the University of Nevada-Las Vegas, and other local cities and conservation groups.

While people should never capture a desert tortoise found in the wild, there is an adoption program available for Utah residents who live outside of Kane, Iron and Washington counties. Click here for details about adopting a captive desert tortoise.

Since 2001, DNR and other partnering agencies have helped prevent 20 species from being listed as endangered and threatened.

“Our species are indicators of the health of our ecosystems, and we need healthy ecosystems to provide those services that we depend on, like clean water and fresh air,” Keleher said. “All of that requires proactive investment in conservation.”