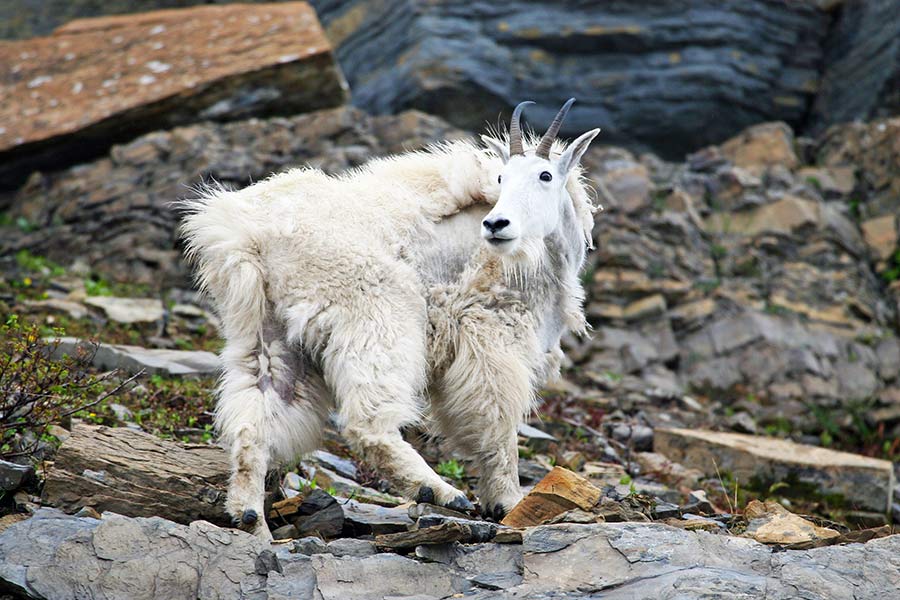 Where to see mountain goats in Utah this spring

Salt Lake City — If you have ever wanted to see mountain goats in the wild, there are a few locations around Utah where you may be able to spot them during March and April. The Utah Division of Wildlife Resources will also be holding two free mountain goat viewing events in the coming weeks.

The DWR will be hosting a free mountain goat viewing event on Saturday, March 26 from 9 a.m. to 1 p.m. near the Upper Stillwater Dam in an area known as Rock Creek, northwest of Mountain Home in Duchesne County. Biologists will be available to answer questions and provide information about mountain goats.

Spotting scopes with phone adapters will be set up with a viewing screen to provide a closer view of the goats; however, participants should bring their own binoculars if they have them. Attendees should also come prepared with warm clothing and water because the area is quite remote and services are not available.

"Participants can usually see 10 to 30 mountain goats and other wildlife from Rock Creek Road, which runs through the canyon where the goats spend their winter months," DWR Northeastern Region Outreach Manager Tonya Kieffer-Selby said. "The Uinta Mountains are the largest contiguous block of mountain goat habitat in Utah."

Mountain goats were reintroduced to the Uinta Mountains in 1987 when DWR biologists released seven animals from Lone Peak. In 1988 and 1989, biologists released another 25 goats from Olympic National Park. Between 1992 and 2000, the herd was supplemented by 57 additional animals from two Utah herds. After the releases, a total of 89 goats had been released at 12 sites on the mountains.

While the event is free, participants are encouraged to register on Eventbrite in advance to reserve a time slot (since the canyon is very narrow and gets congested with heavy traffic) and to get emailed details and updates about the event. If it appears the weather will be too severe, the event will be canceled.

Directions to the Rock Creek Event

To reach the viewing site from U.S. Highway 40, take one of the roads from U.S. 40 to Altamont/Mountain Home:

If you're approaching from the west, turn left (north) onto state Route 87 (North Center Street) in Duchesne. Follow state Route 87 north for roughly 15.5 miles, and turn left onto the road to Mountain Home (21000 West). This road is about 4 miles before you reach Altamont.

If you're coming from the east, drive through Roosevelt on U.S. 40 roughly 5 miles, and turn right (north) onto Ioka Lane (3000 South; this road is right before U.S. 40 turns south and goes uphill). Ioka Lane is also state Route 87, so stay on this road to Altamont, then drive through Altamont to reach Mountain Home Road, and turn north. This road is roughly 4 miles past Altamont.

If you are driving from the state Route 87/Mountain Home Road Junction, travel north on Mountain Home Road about 2.8 miles, and then turn left at the Mountain Home Lodge onto Country Route 95 also known as FR134. This is the road to Rock Creek and Upper Stillwater Dam. The turn isn't well marked, but a sign for the Miner's Gulch, Yellowpine and Stillwater campgrounds is posted near the turn. Follow Route 95 roughly 20 miles to the viewing area.

Biologists will also be at this event to provide information and to offer spotting scopes and binoculars. The event is a great opportunity for Utahns to see some incredible wildlife along the Wasatch Front.

"I never get tired of the excited faces of people seeing their first mountain goat," Scott Root, DWR central region outreach manager, said. "People are amazed at the acrobatic abilities of the goats and how they keep their footing on steep, rocky ledges. The younger goats are a crowd favorite, especially when they are chasing each other."

Goat populations in the Box Elder Peak and Lone Peak subunits in the area increased to a total of approximately 300 animals about 10 years ago. They have since declined, dropping to fewer than 50 animals at one point. Due to limited tracking and the difficulty of doing population counts, it is unclear if there was a true decline in population or if the animals simply relocated. Over the past five years, viewers have seen up to a dozen goats at this location during this time of year.

Participants are also encouraged to register in advance for this free event. You can register on Eventbrite.