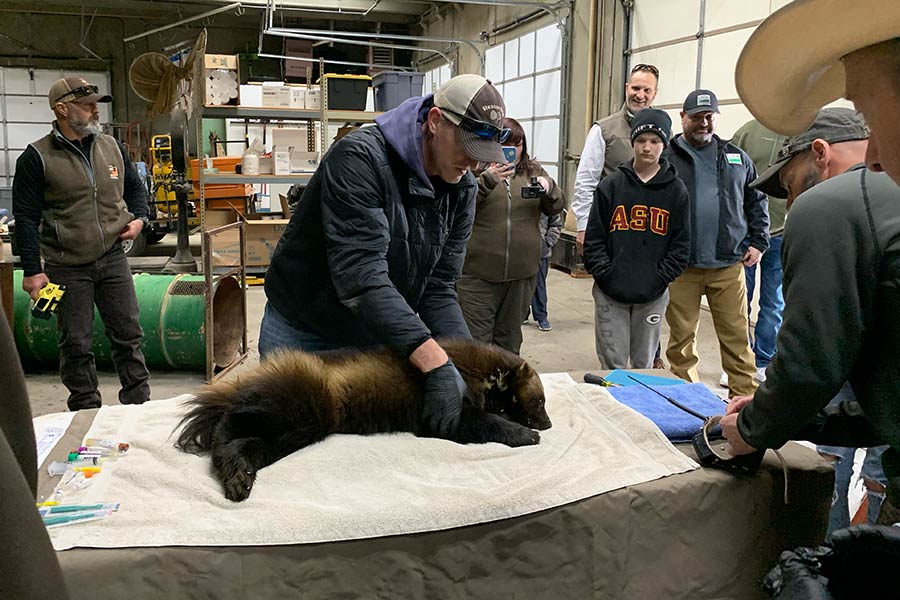 Randolph — A wolverine that was spotted recently in Rich County is now wandering the Uinta Mountains with a GPS collar around its neck. Utah Division of Wildlife Resources biologists are excited to learn more about an elusive animal with only eight confirmed sightings in Utah since 1979. 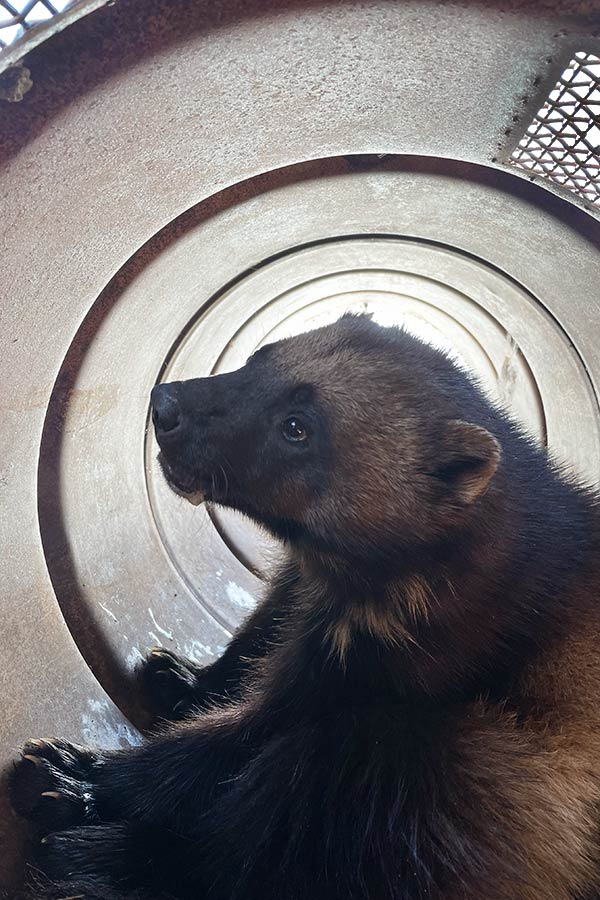 "It's amazing to get a chance to see a wolverine in the wild, let alone catch one," DWR Northern Region Wildlife Manager Jim Christensen said. "This was a once-in-a-lifetime experience."

The collaring effort started the morning of March 10 about 6 miles west of Randolph. A fixed wing aircraft, piloted by personnel from USDA-Wildlife Services, was flying over the area, conducting livestock protection work, when they noticed an animal feeding on a dead sheep. They flew a bit closer and confirmed the animal was a wolverine. They immediately contacted their supervisor who in turn contacted the DWR.

The dead sheep was one of 18 sheep the wolverine had killed or wounded in the area that morning.

To increase the chance the wolverine would enter one of two barrel traps a DWR biologist and a Utah Department of Agriculture trapper were about to set, the sheepherder and personnel from Wildlife Services removed all of the dead sheep from the area. They cut out two hindquarters, placed a hindquarter in each trap, and hoped for the best.

"There was so much activity in the area that morning, I thought the wolverine would be long gone, and we wouldn't be able to catch it," Christensen said.

The private landowner and a sheepherder checked the traps early on the morning of March 11 but found only the hindquarters in the traps and no wolverine in sight. About mid-morning, a second sheepherder visited the area. He noticed a door on one of the traps was down. Inside the trap was the first wolverine ever captured by biologists in Utah.

A DWR biologist, a DWR conservation officer and two members of Wildlife Services retrieved the traps and brought the wolverine back to the DWR's Ogden office. DWR biologists then sedated the animal and drew blood, collected hair samples, checked the animal's teeth and took a series of measurements. Throughout the examination, they monitored the animal's heart rate, breathing and temperature, applying alcohol and ice to its armpits and stomach to keep it cool. Before reversing the effects of the drug, they also attached a GPS collar to its neck.

Biologists determined the wolverine was a male between 3–4 years old. It weighed 28 pounds and — from the tip of its nose to the tip of its tail — was 41 inches long.

"The animal had good, sharp teeth," Christensen said. "It was in really good condition."

After the exam was completed, the animal was placed back in the trap and the effects of the drug were reversed.

"It took only a couple of minutes for it to start waking up," Christensen said. "Pretty soon, it was wide awake and as lively as ever."

Biologists then transported the wolverine to the North Slope of the Uinta Mountains and released it on public land on the evening of March 11.

The chance to track this wolverine is priceless, and the GPS data will provide invaluable information to biologists. That tracking information will include when and where the animal travels, the size of its home range and the type of habitats it uses at different times of the year. All of this information will be used to manage wolverines in Utah, an area that's at the very southern edge of the wolverine's range in the U.S.

"Having a collar on this wolverine will teach us things about wolverines in Utah that would be impossible to learn any other way," Christensen said. "Four different wolverine sightings were confirmed in Utah in 2021. Were we seeing the same animal or different animals last year? Having a collar on this animal will help us solve that riddle. We are so grateful for the awesome collaboration with USDA-Wildlife Services and Utah Department of Agriculture and Food and their assistance with this exciting wildlife research opportunity."