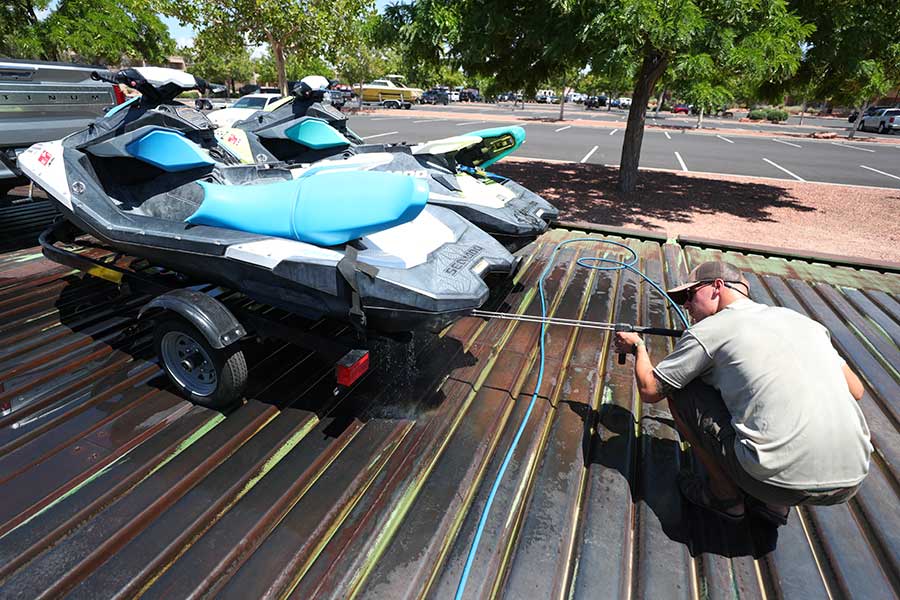 Over 315K boats inspected for quagga mussels during 2021 boating season

Salt Lake City — The Utah Division of Wildlife Resources and other agencies were again hard at work this year, inspecting and decontaminating boats across the state to prevent the spread of invasive quagga mussels.

Statewide, Aquatic Invasive Species technicians with the DWR, Utah State Parks, Arizona Game and Fish Department and the National Park Service have inspected 315,539 boats and performed 7,340 decontaminations since Jan. 1. Of those total numbers, 85,113 of the boat inspections and 2,321 of the decontaminations took place at stations in the Lake Powell area. Lake Powell is currently the only Utah waterbody infested with invasive quagga mussels.

Last year, there were more boaters out on Utah's lakes and reservoirs, which resulted in 447,909 inspections statewide and the decontamination of 11,091 boats.

The new dip tank that was installed earlier this year at the Stateline Launch Ramp at the Wahweap Marina performed 411 of the decontaminations at Lake Powell.

"The dip tank was invaluable in improving efficiency for our decontaminations of complex boats," DWR Aquatic Invasive Species Coordinator Nathan Owens said. "The tank performed about 35% of the decontaminations at the southern end of Lake Powell. The dip tank has now been closed for the season but will resume operations in the same location next spring."

DWR conservation officers issued 660 citations for violations of Utah laws established to prevent the spread of invasive mussels. The majority of the violations were due to non-resident boaters failing to take the mandatory education course and not paying the required fee. Other common citations were for boaters and those with other watercraft (like waverunners, paddleboards and kayaks) who failed to stop at mandatory inspection stations throughout the state.

"While the boating season is winding down for the year, non-residents should remember to plan ahead for next year and be sure to take the education course and pay the fee before launching a boat at any Utah waterbody," DWR Aquatic Invasive Species Sgt. Micah Evans said.

"We also want to remind boaters that as the seasons change, so do the mandatory dry times for self-decontamination for boats," Owens said. "In the summer, the dry time is seven days, during the fall it is 18 days, and it is 30 days during the winter. Wakeboard boats are defined as complex boats, which require a 30-day dry time, unless they are properly decontaminated. During the winter season, there aren't many available watercraft inspection staff across the state. So we ask boaters going to Lake Powell — or to neighboring states' mussel-infested waterbodies — to please either have their watercraft decontaminated at that location before leaving, or to call DWR ahead of time if they are going to need a decontamination before their next launch."

Visit the STD of the Sea website for further information regarding boater requirements.