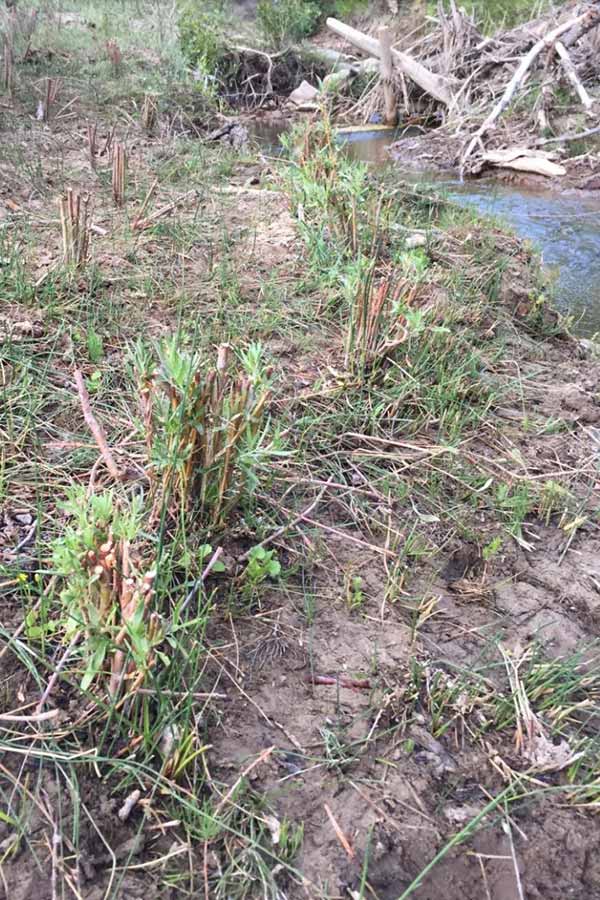 Wildfires can often be beneficial for landscapes by creating a fresh start for wildlife habitats. Although it can often take decades for affected lands and waterbodies to fully recover on their own, active hand-on management can often speed up and improve the recovery. After the large Seeley Fire burned across the landscape, the U.S. Forest Service worked with DWR habitat biologists to reseed much of the area in the fall of 2012. Many of Utah's wildfires require immediate reseeding to prevent invasive weeds and other less beneficial plants from taking over the area. Seeding can also help to decrease severe erosion in the burn scar areas.

"However, seeding can be expensive, so we typically have to prioritize which areas will be reseeded," DWR Wildlife Impact Analysis Coordinator Nicole Nielson said. "We often prioritize areas that could have impacts to human health and safety, including from potential erosion that could impact infrastructure and watersheds."

After the reseeding and natural establishment of the Seeley Fire area, there were a lot of new grasses and wildflowers on the landscape. These types of plants are very beneficial and provide a large amount of nutrients for deer, elk and other wildlife. However, it can take a few years to get enough vegetation back on the slopes to stabilize them and prevent massive erosion.

"With the Seeley Fire, big rainstorms after the fire caused a lot of debris flows with large amounts of sediment," Nielson said. "Unfortunately, much of that sediment flowed into nearby rivers. High amounts of sediment in water reduces the amount of oxygen in the water and typically kills fish. We saw impacts for miles downstream of the wildfire area, and a lot of fish were killed as a result."

Typically, intensive stream restoration efforts don't begin until roughly four years after a wildfire, in order to give the slopes time to stabilize and to see if some areas will naturally recover without utilizing additional tools and techniques.

"Sometimes, you have to allow restoration projects time to regenerate or stabilize for a few years to know if you need to continue those efforts," Nielson said. "When active restoration efforts are underway, staying out of these areas is very important, in order to reduce erosion and to not disturb new vegetation or other stabilization efforts."

In 2016, the DWR partnered with Trout Unlimited, private landowners, the U.S. Fish and Wildlife Service and the Sageland Collaborative utilized an innovative method of building artificial beaver dams to help restore Miller Creek, which was heavily damaged by runoff after the Seeley Fire. This unique dam-mimicking technique was conceptualized in Utah and decreases erosion, raises river levels and even improves water quality. The beaver dam analogues were such a low-cost, effective method of restoring Miller Creek that they were also installed in Nuck Woodward Creek and other rivers in the area.

The DWR and its partners also used heavy equipment to restore other parts of the stream, including rebuilding some river channels to prevent additional erosion and to build fish habitat. Additional restoration efforts for areas impacted by the Seeley Fire area are planned for the coming year.

The majority of the restoration that occurs after a wildfire is made possible through funding from Utah's Watershed Restoration Initiative. Created in 2006, this partnership-based program aims to improve high-priority watersheds throughout the state. It focuses on improving watershed health and biological diversity, water quality and opportunities for sustainable uses of natural resources.

"This program creates great partnerships, ranging from communities and government agencies to non-profit groups and private landowners. It leverages different skill sets and funding opportunities to get the best restoration efforts on the ground," Nielson said. "As a wildlife agency, much of our focus is on improving landscapes for fish and wildlife, but healthy watersheds are just as important for people as animals."