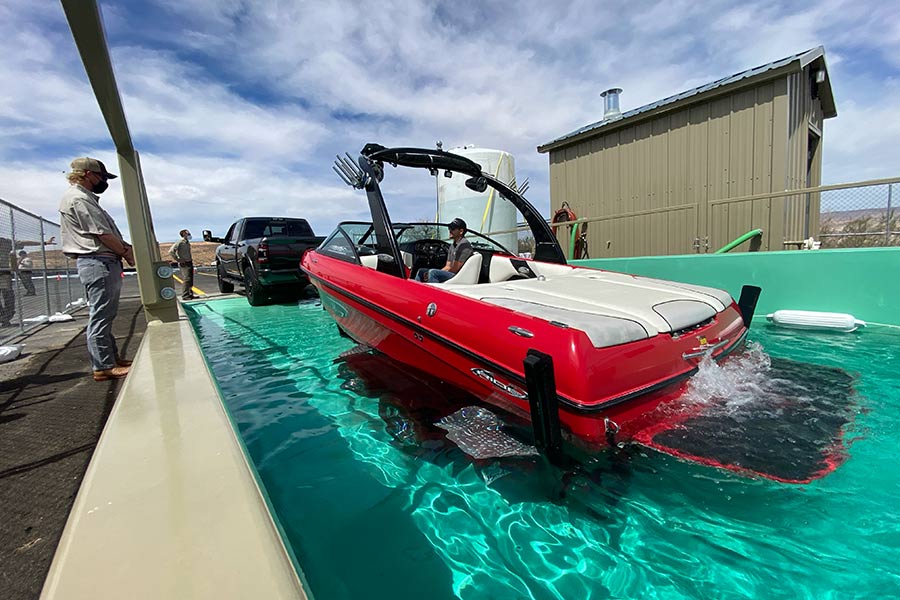 Salt Lake City — Law enforcement officers and technicians with the Utah Division of Wildlife Resources and other agencies had a busy weekend working to inspect and decontaminate boats across the state to prevent invasive quagga mussels in Lake Powell from spreading to other Utah waterbodies.

Statewide, Aquatic Invasive Species technicians with the DWR, Utah State Parks, Arizona Game and Fish Department and the National Park Service inspected 9,938 boats and performed 161 decontaminations from Friday to Monday. Of those total numbers, 1,093 of the boat inspections and 51 of the decontaminations took place at stations in the Lake Powell area.

During the 2020 Labor Day weekend, 14,009 inspections were performed statewide, and 251 boats were decontaminated.

"Despite the closing of the Stateline boat ramp this summer due to low water levels at Lake Powell, the new dip tank has been extremely valuable in providing decontaminations to boaters retrieving watercraft from the Wahweap launch ramp," DWR Aquatic Invasive Species Coordinator Nathan Owens said. "After making several modifications to it, the tank has been able to accommodate approximately 95% of the boats and boat trailers used at Lake Powell. Around 400 decontaminations have been performed using the dip tank this summer. We will be shutting down the dip tank in the next few weeks as the boating season ends, but will plan to resume using it in the same location next spring."

Statewide, DWR conservation officers issued 46 citations for violations of Utah laws established to prevent the spread of invasive mussels. The majority of the violations were due to boaters and others with watercraft not stopping at an inspection station. Other common violations issued over Labor Day weekend were for non-resident boaters failing to complete the mandatory education course and fee payment — which went into effect last year — and for boaters failing to remove drain plugs while transporting their boats. That law also went into effect last summer.

"It is very important for every boater who visits the lake to pull their drain plug and make sure they aren't transporting invasive quagga mussels when they leave," DWR Aquatic Invasive Species Lt. Bruce Johnson said. "We are still seeing a large number of violations with people not complying with the new laws passed last year. We also want to remind boaters that all watercraft leaving Lake Powell require an exit inspection during the inspection station's hours of operation. 'Watercraft' includes kayaks, canoes, paddleboards and inflatable rafts. It is important to remember that inspections are not the same as decontaminations. After a watercraft is inspected, it must still be decontaminated before relaunching at another waterbody. If a decontamination can't be performed, the watercraft must wait the required dry time before launching again."

There are over 40 inspection stations located at various waterbodies and along highways throughout Utah. Visit the DWR website for a list of all the decontamination stations around the state. Visit the STD of the Sea website for further information regarding boater requirements.