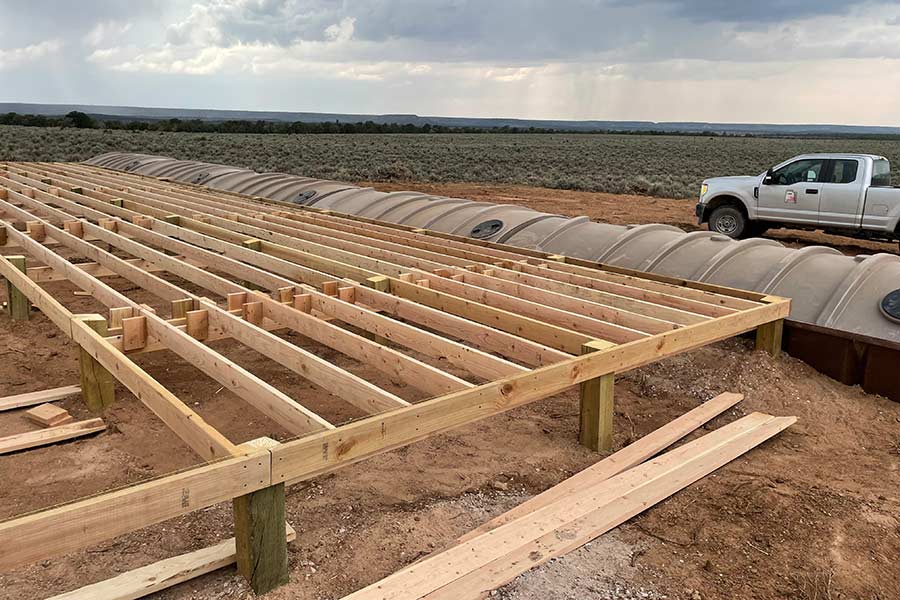 Huge 7,200-square-foot water guzzler, other ongoing efforts to help bring drought relief to wildlife and livestock in the Book Cliffs

Salt Lake City — The Book Cliffs is a well-known hunting area in northeastern Utah. In recent years, though, deer, livestock and other animals in the area have struggled due to ongoing drought conditions limiting water sources and habitat, which provides shelter and feed. A group that comprises Utah Division of Wildlife Resources biologists and several state and federal agencies, conservation groups, universities and landowners has been working to address those issues.

In April 2019, the Utah Wildlife Board tasked the DWR with forming a Book Cliffs Working Group to assess the causes of the decreasing mule deer and elk populations in the area and to develop a plan. Several stakeholders are involved in the group, including the Bureau of Land Management, the Utah School and Institutional Trust Lands Administration, the Natural Resources Conservation Service, the Utah Department of Agriculture and Food, the Utah Farm Bureau, Utah State University, Brigham Young University, the Mule Deer Foundation, the Rocky Mountain Elk Foundation, Sportsmen for Fish and Wildlife, and several landowners. The group meets several times a year to coordinate implementation of the action plan that was completed in May 2020.

"The Book Cliffs area includes crucial, but limited, summer range for many big game animals," DWR Northeastern Region Habitat Manager Pat Rainbolt said. "Livestock also graze there. Due to the drought conditions, there hasn't been enough available feed, water or shelter for all the different animals that depend on the 800,000-acre Book Cliffs area. The working group helps to address issues and implement projects that will have long-lasting impacts to help the wildlife and livestock that use this area."

As part of Utah's Watershed Restoration Initiative, the DWR and other partners have done several projects to improve habitat in the Book Cliffs, including:

During the past two years, researchers have also implemented a study in the Book Cliffs to identify any factors that might be limiting the growth of deer and elk populations in the area. The study includes monitoring the condition and survival rates of adult deer and elk and determining their causes of death; studying their pregnancy and birth rates; monitoring habitat use from deer, elk and wild horses; and also monitoring the survival rates of newborn deer fawns and elk calves to determine their causes of death. This spring, biologists caught and collared 27 newborn deer fawns in the Book Cliffs, and later learned that 22 of those died, with the majority of the deaths attributed to drought. Biologists also captured and placed tracking collars on 30 newborn elk calves in the Book Cliffs. In contrast to deer, only five of these calves have died, and most were killed by predators.

This summer, DWR biologists and other partners also installed 16 new water guzzlers, including the rebuilding of a "mega" guzzler in the summer range area of the Book Cliffs to help provide water for wildlife and other animals during the drought. A traditional guzzler typically consists of the following:

This "mega" guzzler is 15 times the size of a traditional one, and includes a 7,200-square-foot apron that drains into five storage tanks. It can take about 6 inches of precipitation to fill a traditional-style guzzler — for the mega guzzler, it only takes 2 inches. The tanks were installed in July, and the apron will be completed by September. Animals have already been seen using the guzzler for water.

"Projects like this are a crucial component of successfully balancing the needs of Utah's wildlife and livestock alike," Utah Department of Agriculture and Food Commissioner Craig Buttars said. "Providing resources for feed, water and habitat enhancement supports optimal conditions for all species who inhabit the area."