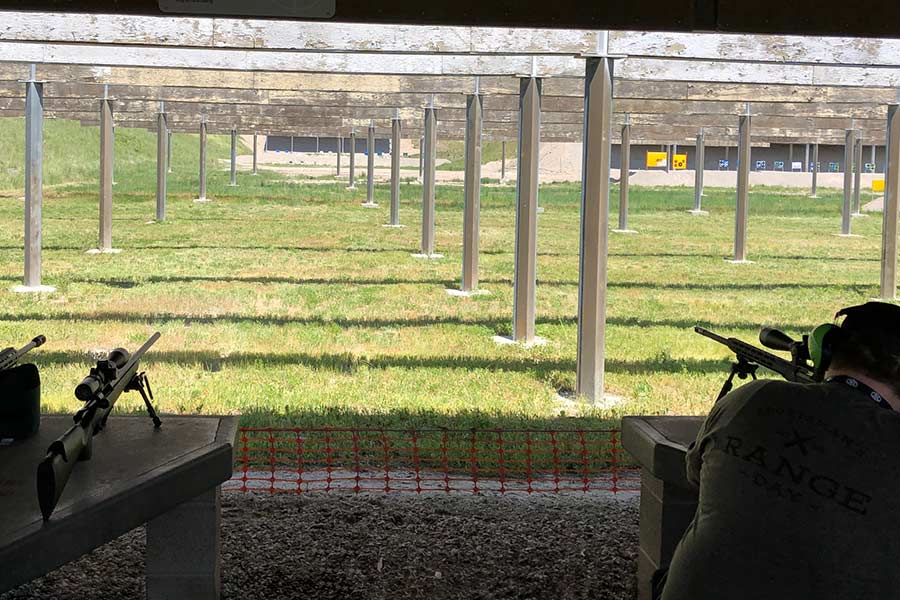 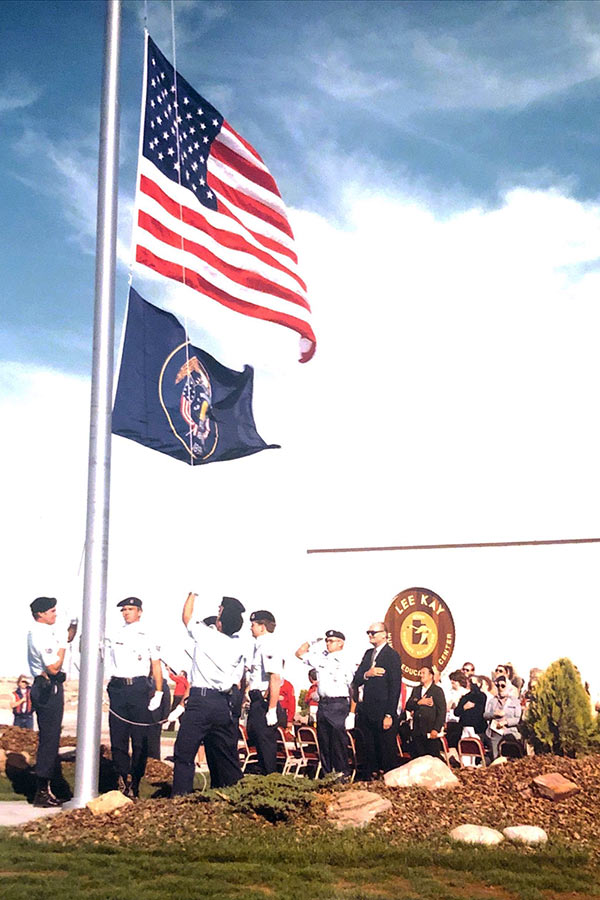 Flag raising at the dedication of the Lee Kay Public Shooting Range on Sept. 28, 1981. Then-Utah Gov. Scott M. Matheson is standing near the middle, as members of the Utah National Guard raise the flag.

Salt Lake City — The Lee Kay Center for Hunter Education. The "Lee Kay Center." The Lee Kay Public Shooting Range. It's been known by several names since its opening, but this facility has been educating people about gun safety and offering a safe space to practice archery and firearm target shooting for over 40 years.

The site of the shooting range was previously called the "Utah Ordnance Depot." It was used as a wartime ammunition plant operated by Remington to produce and test .30 caliber and .50 caliber ammunition during World War II. In 1949 — after the war had ended — Congress authorized the transfer of that federal land to be used for wildlife conservation.

Construction for the 1,034-acre shooting range began in 1979, and the dedication of the Lee Kay Public Shooting Range was held on Sept. 28, 1981. The range was created to provide a space where people could learn hunter education and gun safety, as well as safely target shoot in Salt Lake County.

Utah began its local Hunter Education Program in 1957 because, at the time, the state had one of the highest rates of hunting incidents in the U.S. That year, there were 165,081 licensed hunters in Utah, and a reported 126 hunting incidents, 22 of which ended in fatalities.

"The state of Utah implemented the Hunter Education Program in an effort to help decrease the number of hunting-related accidents," Utah Division of Wildlife Resources Hunter Education Program Manager RaLynne Takeda said. "And those efforts have been very successful. Since the beginning of the program, hunting incidents in Utah have decreased drastically. In 2019, Utah had 448,271 licensed hunters, and only saw three hunting-related incidents and no fatalities."

The range was named after Lee Kay, who was instrumental in helping to start the Hunter Education Program in Utah, as well as creating magazines, videos and other outreach programs to promote gun safety, hunting and fishing in Utah. He worked for the DWR from 1927 to 1962 and earned the nickname "Mr. Conservation." The year that Kay retired, Utah received the National Rifle Association's International Award for having the lowest gun accident rate. Kay died in 1980 before the shooting range was completed, and it was dedicated in his honor at its completion the following year.

Lee Robertson, the Hunter Education Coordinator at the time the Lee Kay Public Shooting Range was opened, helped Kay acquire the federal funding to make the facility a reality. His father had been injured in a gun accident, and he wanted to provide education and a safe space to prevent that from happening to others.

"Robertson wanted a place for hunters to have a place to sight in their rifles, so they could make a clean, ethical shot in the field," Takeda said.

The range has undergone various expansions and renovations since it was opened. Today, it offers a variety of amenities, including:

"The dog training area is probably one of the least well-known parts of the facility," DWR Lee Kay Public Shooting Range Manager Blanche Smith said. "It provides a 934-acre area where people can train hunting dogs, and many of our users have told us they consider it to be one of the top 10 hunting dog training facilities in the U.S."

On average, the Lee Kay Public Shooting Range has roughly 50,000 visitors a year to its various ranges. Over 1 million clay targets are thrown each year at the shotgun ranges.

"We really enjoy the members of the public who visit, and our volunteers and staff who help run the ranges," Smith said. "They are great people who are passionate about the outdoors and shooting sports. I love introducing people to target shooting for the first time and seeing their face light up when they hit a target for the first time. We are the last outdoor shooting range in the Salt Lake Valley, and we realize the importance of offering a safe, controlled environment for the public to come participate in shooting sports. This facility is an invaluable asset for residents along the Wasatch Front."

To highlight and celebrate the 40th anniversary of the shooting range, several discounts for the various ranges will be offered throughout August, coinciding with National Shooting Sports Month. An instructor will also be available to offer training and tips for each of the different types of shooting sports. The discounts are as follows: